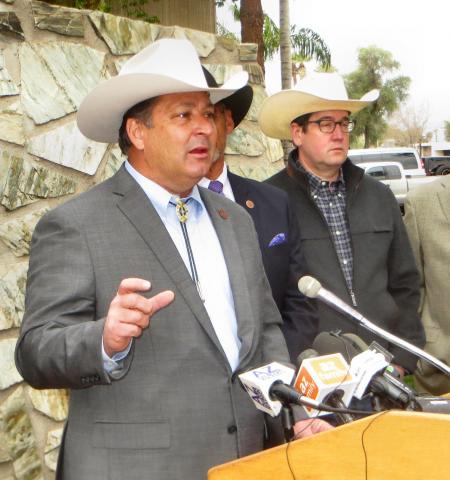 In February, Arizona legislators rejected a bill that would have forced makers of alternative milks, like soy and almond, to stop using the word “milk” on its labels.

“Almonds don’t lactate” was widely quoted as a major reason for the bill. But, this phrase and the debate did not start in Arizona and do not look to end anytime soon.

Globe rancher and Republican lawmaker David Cook proposed that Arizona limit the use of the word "milk'' on soy and non-dairy products. Rep. Cook said he was mainly concerned about protein produced in a lab. He is not the only one.

He said wanted to be sure that what was being sold as a dairy item actually at one point had a connection to a cow or goat or other lactating animal. Cook was widely quoted for saying, “Almonds don’t lactate," which got attention, but not a new argument.

Scott Gottlieb, the now former head of the U.S. Food and Drug Administration after resigning in March, originally quoted the phrase from the federal dairy standards to illustrate the difference between animal and non-animal milks. Gottlieb said “milk” has long been defined as coming from an animal and new dairy standards were a major part of his 2019 agenda.

"It’s not a black and white situation but between the traditional argument that the traditional names should be reserved for traditional foods versus someone saying 'no,'" according to Bob Hibbert, an attorney working on food labeling lawsuits in several states. "If someone comes up with another product and it’s clear enough on the label what the product is, then no one is misled and there’s nothing wrong with that," he said.

A Louisiana state senator introduced a bill that would remove the term “milk” from anything that is not dairy. Earlier in March, Maryland’s state Senate voted to ban the sale of plant-based beverages from using the milk label. Maine and Vermont also have legislation underway. All are hoping to join North Carolina — the only state that has a ban in place, but a ban that can only be enforced if and when other states pass similar legislation.

"Almond milk sounds good. You know, milk as a general term is something that we think of as creamy and nutritious and lovely."
— Rebecca Rupp, writer

“It’s tough, you know, if one product is regulated like milk pricing is and soy milk isn’t regulated, by definition, then you’ve got what you call free enterprise with soy milk and it’s strictly supply and demand," said Tim McCabe, outgoing head of the Arizona Food Marketing Alliance, a trade association for Arizona’s food industry. "But its competition, regular milk, is regulated by the federal government. And it’s really kept the prices of milk very low, and that’s been to the detriment of the dairy farmers and the processors."

The fight then goes to the consumer and has done so for decades — actually, decades upon decades.

"You know there’s some real economic and consumer appealing advantages to certain terminologies. You know butter sounds nice. It’s creamy. It’s lovely," said writer Rebecca Rupp. She wrote about the original food fight, “The Butter Wars," which go all the way back to 1869, when margarine was created as a butter substitute for the French military. By the 1870s, margarine was being sold in the United States. She said the debate is essentially about territory and money.

“Well, nobody wants their butter to look like wallpaper paste, so all the margarine manufacturers wanted to color this stuff yellow," she said.

U.S. butter makers reacted strongly by convincing legislatures in several states to pass regulations requiring margarine be dyed a color other than yellow — most commonly, pink. That fight eventually made it to the U.S. Supreme Court, which sided with margarine makers. Rupp says whether it’s butter or milk, at the most basic level, the food labeling fight is about product identity.

“Almond milk sounds good. You know, milk as a general term is something that we think of as creamy and nutritious and lovely. You know, look at the milk of human kindness,” she said.

Whether it is labeling the feeling or the item, settling the debate on the term “milk” is on hold. Gottlieb resigned in early March, leaving the “standards of identity” project for dairy unfinished.