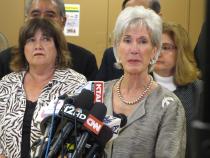 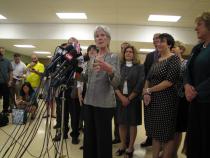 Health and Human Service Secretary Kathleen Sebelius was in Phoenix on Thursday to visit call centers where people can sign up for insurance under the Affordable Care Act. She addressed concerns about problems with the federal website and calls for her to resign.

One of the places Sebelius toured was the Wesley Community and Health Center in central Phoenix where she met with navigators who help people purchase health care plans. She acknowledged that she is frustrated that computer glitches have prevented a lot of people from submitting their insurance applications since the beginning of the month. Sebelius also said she has no plans to step down despite mounting political pressure from critics.

“The majority of people who want me to resign I would say I don’t work for and do not want this program to work in the first place. I have had frequent conversations with the president, and I have committed to him that my role is to get the program up and running and we will do just that," Sebelius said.

Sebelius said she is confident the computer glitches will be worked out soon and anyone who wants insurance can get it in January if they enroll before the Dec. 15 deadline.

Arizona Sen.Jeff Flake took advantage of the secretary’s visit to apply pressure of his own. He wrote a letter to Sebelius asking for more transparency about the number of people who have enrolled in the federal healthcare exchange. As Sebelius toured Phoenix on Thursday, health officials in Washington said 700,000 people have completed online applications for coverage under the Affordable Care Act, but Flake said that leaves out key information.

"The number we obviously need to know is how many people are enrolling. Believe me, the administration has those figures, they just chose not to get them out," Flake said.

Flake cited a news report from North Dakota that claimed the Obama Administration asked a health insurance company there not to reveal how many people have enrolled. Flake said it was up to the president whether or not Sebelius should resign.