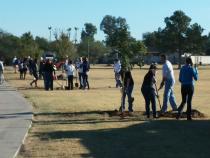 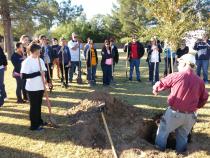 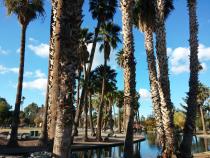 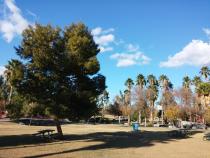 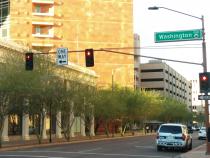 Photo by Andrew Bernier - KJZZ
A line of Palo Verdes along 3rd Avenue and Washington in downtown Phoenix.

Phoenix is known as an oasis in the desert, but can it become a city in a forest? There are some big local organizations and a big game that are trying to make that happen.

With the Super Bowl coming to Arizona, the game is bringing a lot of economic activity and excitement to the state, but it's bringing something you would not have expected — trees.

“Well, this is the 10th anniversary of urban forestry at Super Bowl," said Jack Groh, the Program Director of the NFL’s Environmental Program. "The environmental program at Super Bowl has been going on 22 years now."

Groh said the program had difficulty with its original intention, but rooted itself as a Super Bowl tradition.

“When we originally started tree planting, we did look at it as a carbon offset," said Groh. "How exactly do you measure the carbon sequestration of trees? But in the mean time, this is part of our overall greening strategy for Super Bowl, and it also leaves a nice legacy,” Groh said.

The city is aware of the carbon footprint big events have. Phoenix City Council member Bill Gates said Phoenix is pushing to expand its urban forest.

“We have this focus on creating more shade through urban forestry, planting more trees in our city parks, in medians and things of that sort," Gates said. "One of the challenges, especially with trees that require more water, is that we’re doing everything we can to conserve water. That’s why going with the indigenous trees is a real plus.”

“Really need to be using native species because they will be so suitable for the types of soils that we have," Selover said. "They don’t have a lot of nutrients in them. They’re alkaline. So there’s a lot of things you can’t plant unless you do huge amounts of soil treatment.”

The city of Phoenix has a goal of 25 percent canopy coverage by 2030 from both trees and structures. Though emphasis is on shade, Selover notes the benefits that more trees offer.

“You have some carbon sequestration, but you have some pollution benefits," Selover said. "There’s some particulate matter and things that are kind of scoured out. So they’ll provide some shade, they’ll provide cooling from evaporation but they’ll also provide other benefits that aren't the same as what you would get with a structure.”

Tree or structure, the city still has a long way to go to reach it’s goal.

“We’re anywhere from 9 to 12 percent throughout the city and that ranges from seven in some areas to 17 in others," said Richard Adkins, forestry supervisor for the City of Phoenix.

Looking around Encanto Park, he notes the more trees there are, the better the investment for the city.

“Trees appreciate in value the minute you put them in," Adkins said. "The average return on investment for a medium-size mature tree here in the Valley is $2.23 for every $1 expended. And that benefits back to the community.”

Adkins said city land is doing a good job toward its goal and said the public can see growth on an online canopy map. But, he notes most of the land is outside the city's control.

“What the city needs to do is provide an example, provide information about the benefits of trees," Adkins said. "And work with the private landowner to show them that the trees are of benefit, not only to their property but to the community as a whole.”

And some organizations are doing this. Local utilities have partnered with the Valley Permaculture Alliance, or VPA, to support sustainable urban living in the desert. The partnership gives customers free trees to help shade their house and reduce cooling bills.

“The program is specifically for single-family home owners, but when you look at how big of a percentage residential is compared to public, that’s a huge impact when you’re able to get people to not only plant trees, but learn how to plant them," said Aimee Williamson with the Valley Permaculture Alliance.

“So there’s a lot of different players when it comes to development and a lot of times were not invited to the table,” Williamson said.

“It’s where community happens in Phoenix," said Bonnett. "Under the shade tree, under the shade of buildings. I mean, you’ll see everyone wants to park under that tree in the parking lot. You catch yourself following the shade.”

And if Phoenix realizes its ambitious goal, there may be more shade to park under by the next time the Super Bowl comes to town.