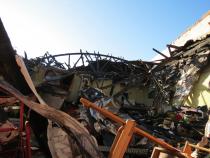 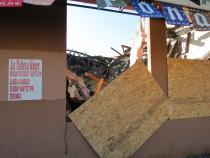 Officials with the Phoenix Fire Department are investigating the cause of a fire at La Tolteca Restaurant. The building and restaurant had been part of the downtown landscape for almost 70 years.

Crews this morning were busy boarding up the structure after the fire overtook the restaurant on Saturday.

The blaze broke out in the attic space. Phoenix Fire Captain Ron Jesse said because the building had what’s known as a bowstrung roof, firefighters were forced to approach the fire from the outside.

"They went in, they did a quick search, looked around saw that there were no occupants inside," he said. "The building and the fire was overwhelming above them, and they went defensive on it."

Jesse said that the building was a total loss. The cause of the incident is still under investigation.