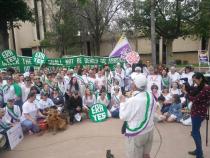 Arizona Republicans blocked an effort that would have forced a vote on having Arizona ratify the Equal Rights Amendment (ERA).

The vote came even after three Republicans, who are co-sponsors of a Senate resolution to ratify the ERA, refused to side with Democrats, who sought the vote. For other Republicans, their reasons appeared philosophical.

"The Equal Rights Amendment does not say anything about women. It puts ‘sex’ in the Constitution. And 'sex' has a lot of different definitions today than it did in 1970s. Any protection for women would be gone," Sen. Sylvia Allen said. "This is the unintended consequence of the ERA."

For example, Allen said it would be impossible to separate the sexes in sports, adding that transgender men are already disrupting women’s sports.

Another Republican argued that the ERA would provide a constitutional argument for abortion. Democrats said such opposition is based on myths.