(Photo by Stina Sieg-KJZZ)
PoeFest, which wraps up Halloween night at the Rosson House, is all about celebrating the creepy and crazy characters that inhabit Edgar Allan Poe’s prose. Above, Beau Heckman gets gleeful as the main character in Poe’s “The Black Cat."

(Photo by Stina Sieg-KJZZ)
Danette Porter plays the one non-Poe character in the festival. But she makes sure that her rendition of horror author Mary Shelley is downright unsettling. In her one-woman piece, she tells of the origins of “Frankenstein.” 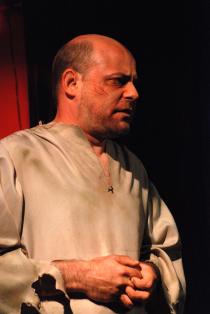 (Photo by Stina Sieg-KJZZ)
Heckman’s character has killed and tortured and fully descended into the darkness of his own psyche – and can’t figure out why. “The Black Cat” is one of several Poe stories brought to life during PoeFest. The festival is now in its fifth year.

(Photo by Stina Sieg-KJZZ)
Porter says she has been wanting to do PoeFest for years but was first pregnant then busy raising a toddler. She says performing Poe while expecting would have lent “a new layer of crazy” to the stories.

(Photo by Stina Sieg-KJZZ)
Porter’s husband, James is one of the founders of PoeFest. It’s a fundraiser for Arizona Curriculum Theater, which brings classic literature and the performing arts into schools.

(Photo by Stina Sieg-KJZZ)
Above, Heckman and Danette and James Porter pose with a nearly life-size Poe cut out. James Porter is performing at the final night of PoeFest. He’ll be doing “The Raven” every 20 minutes at the possibly haunted Rosson House.

Edgar Allen Poe was never afraid to explore the dark side. His poems and stories tell of murder, mourning and reanimation of the dead, and more than 150 years after his death, his fans are still eating it up. Every October, PoeFest celebrates the writer and his morose prose.

Imagine a long, drawn out, unsettling cackle. That is the sound of actress Danette Porter as Mary Shelley, author of Frankenstein and one of Poe’s contemporaries. Porter and her cohorts do not do readings but full-on performances.

She describes the festival’s purpose bluntly.

“You come in. We scare the hell out of you. You leave,” Porter said.

PoeFest is now in its fifth year, and its formula has not changed. Every Friday and Saturday this month, visitors are treated to two macabre tales in the Ghost Lounge of Hotel San Carlos in downtown Phoenix. Actors from Arizona Curriculum Theater present the tales as inmates in a 19th century insane asylum. Porter plays the only non-Poe figure of the bunch, but she fits right in.

“Oh, I get to look ugly,” Porter said, giggling. “Alright! And the uglier the better.”

Imagine messy hair, a tattered nightgown and crazy eyes. As Shelley, she yells about the “grim terrors” of her “waking dream” with a voice that swings from screams to unnerving, hushed tones.

She is a nice pairing with Beau Heckman who embodies the lost soul at the center of Poe’s “The Black Cat.” With an anguished face, he admits to the audience that he killed his wife.

“I withdrew my arm from her grasp and buried the ax in her brain!” Heckman yelled.

Heckman’s character is a mild-mannered guy who is clearly taken a wrong turn into murder and abuse, but Heckman’s alter ego cannot figure out why.

“It’s a deliciously dark piece,” Heckman said. “I feel like, you know, that kind of energy that you get when you watch Anthony Hopkins do Hannibal Lecter. It’s just that kind of, that kind of compelling crazy, that you can’t take your eyes off – hopefully.”

There is safety in exploring that insanity onstage, he explained. As actors, Heckman feels just enough of a buffer between him and the darkness.

“Like a tiger prowling in a cage, back and forth,” Heckman said before Porter piped in.

“There’s that cage right between us and the crazy,” she added.

Danette’s husband and PoeFest founder James Porter knows flirting with the dark side isn not just for adults. He tells the audience so after each performance.

Mr. Porter’s script goes something like, “Ladies and gentlemen, we are Arizona Curriculum Theater, we go into schools with this material to scare the hell out of your children.”

All the shows at the San Carlos are now sold out. But Porter will be starring in a special performance on Halloween at The Rosson House.  It will just be him, doing the “The Raven," every 20 minutes in the supposedly haunted Victorian. That means Porter will only have a few minutes between performances to catch his breath, maybe grab a drink of water.

Then, “right back at it,” he said. “Once upon a midnight dreary.”