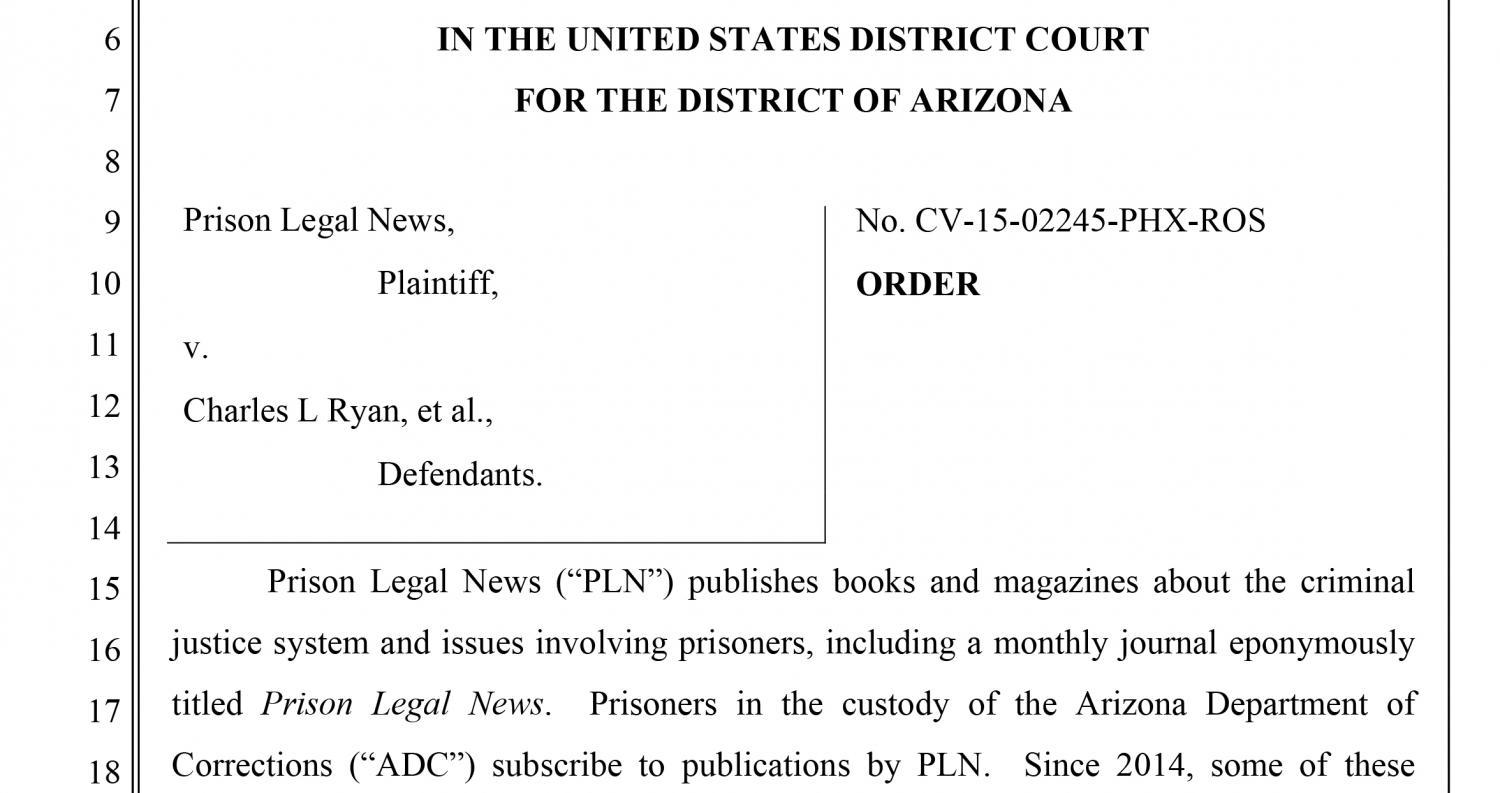 Created in 2010 and amended twice in the years since, ADC’s regulations prohibiting sexually explicit material have a stated a purpose: “to assist with rehabilitation and treatment objectives, reduce sexual harassment and prevent a hostile environment for inmates, staff and volunteers.”

The most recent version, amended in 2017, states inmates “are not permitted to send, receive or possess sexually explicit material or content that is detrimental to the safe, secure, and orderly operation of the facility.”

The department has cited the policy in several instances where inmates were denied a legal publication they subscribed to or were only allowed to receive the magazine after ADC redacted it.

The Arizona Department of Corrections says it is reviewing the judge's ruling.

“I call it a First Amendment case that happens to be in prison,” said Paul Wright, executive director of the Human Rights Defense Center, the publisher of Prison Legal News. “This is about a publishers right to distribute our magazine to an incarcerated audience.”

Wright says Prison Legal News has “around 9,000 subscribers nationally” and about 70 percent of them are incarcerated.

He says the publication filed a lawsuit several years ago when readers informed him copies of Prison Legal News were being censored by the Arizona Department of Corrections on the basis that the publication was sexually explicit or pornographic in nature.

“The apparent basis for this has been our reporting of sexual assaults and rapes that occur in the prison environment,” Wright said, “oftentimes literally quoting federal and state court opinions on this assaults.”

Wright says for many of his subscribers, Prison Legal News is the only way they can get information about cases that may apply to them.

“When we’re reporting on the cases it’s important to tell our readers: these are the facts of the case, this is why the court ruled the way it did,” he said.

Wright says subscribers went for months without getting copies and other times would receive the magazine after ADC redacted portions.

“I don’t really think that they, actually, in their heart of hearts, believe that we are pornographic,” Wright said, “so much as they are using this as a pretext to try to censor us and prevent prisoners in Arizona from learning what their rights are in the event that they are sexually assaulted.”

Wright said the problem had only occurred recently, after years of dealing with ADC. “Basically for 25 years or so, we didn’t have any censorship problem in Arizona.”

Lisa Ells, the lead counsel representing Prison Legal News, said they tried to settle several times with ADC, but the department insisted their policy was appropriate.

“Whether they have taken out the publication wholesale or they’re just using the government censor pen and redacting out what they don’t like, either one is a violation of the First Amendment,” Ells said. “Because it’s the government deciding what people can and can’t read inside the prison system.”

Ells represents Prison Legal News in California and reviewed policies in other states in preparation for Arizona lawsuit. “There was just nobody in the United States that came anywhere close to the type of really broad prohibition on any text that even relates to or mentions sexual intercourse in any way.”

“Whether they have taken out the publication wholesale or they’re just using the government censor pen and redacting out what they don’t like, either one is a violation of the First Amendment. Because it’s the government deciding what people can and can’t read inside the prison system.”
— Lisa Ells, Prison Legal News lead counsel

“Prohibited and/or redacted material include articles about the persecution of the Yazidi people by ISIS, articles about the Me Too movement, Maya Angelou’s I Know Why the Caged Bird Sings, a New Yorker book review of a scholarly biography of Sigmund Freud, a Mayo Clinic newsletter that contained a medical illustration of a hernia, and self-portraits by former President George W. Bush,” Silver wrote. “Given the literal reading of ADC’s policy, these examples properly qualify as prohibited material. No reasonable trier of fact would conclude that such broad censorship is rationally related to furthering ADC’s penological interests.”

Silver ordered the parties in the case to submit suggestions for a change to the policy. Ells says they will be pushing for language that is much less broad.

She says she found the current policy deeply offensive because it has ended up censoring quotations from Court of Appeal decisions. “Like verbatim quotations of legal decisions that were reported in this publication were redacted,” Ells said. “If the Arizona Department of Corrections feels like it can censor this publication when it’s quoting court cases, then it also feels like it can censor what the courts can say or what prisoners can read about their legal rights in the prison system.”

Ells says they are gratified with Silver’s ruling. “Because we think it had the potential to really expand censorship in other prison systems across the country if she hadn’t held firm here.”

Wright noted that Judge Silver quoted the same passage from a court ruling that prompted Prison Legal News to be banned in Arizona prisons.

“Of course we plan to send a copy of the ruling to our subscribers and readers in ADC so that they’ll be aware of what’s going on in the case,” Wright said. “And I’m wondering now if ADC is going to censor Judge Silver’s ruling because it contains the language from another court ruling dealing with sexual assault.”