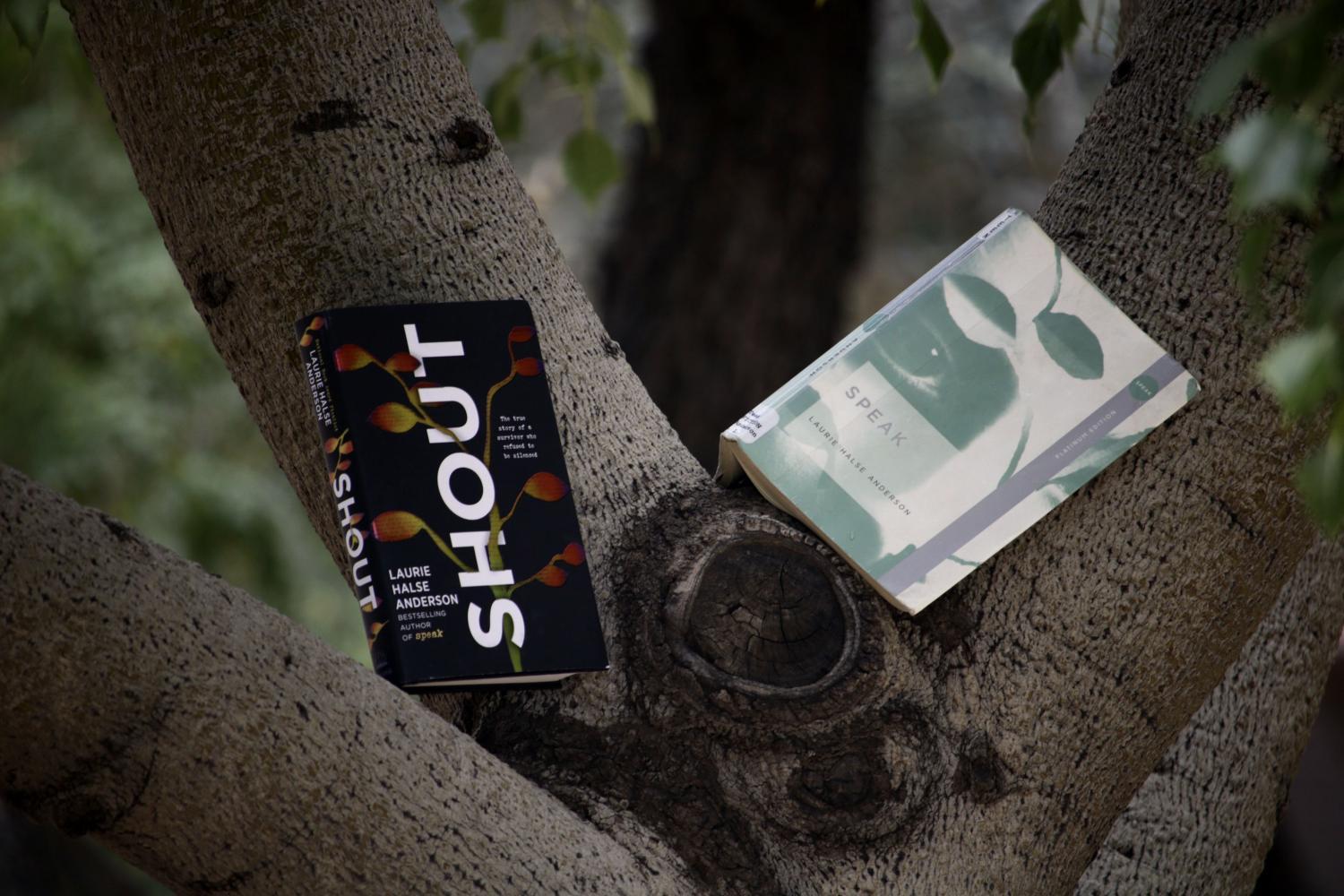 Mariana Dale/KJZZ
When "Speak" came out in 1999 it opened a national conversation about adolescence and sexual assault. Laurie Halse Anderson's newest book "Shout" is a poetic memoir that documents, in part, the creation and aftermath of the book.

Before there was the #MeToo movement, there was 1999 book "Speak."

The young adult novel about the aftermath of a sexual assault became a fixture in libraries and classrooms, including some in Arizona.

The main character is Melinda, a freshman at Merryweather High.

“Earlier in summer she was invited to a party,” said Oscar Landa, a freshman at Coconino High School in Flagstaff.

Landa and his classmates in freshman English read the book earlier this year. I asked them to help me explain the book’s plot.

She meets a boy there.

“And everyone thinks he’s hot, and his name’s Andy Evans, and he raped her,” said Skylar Meister. “No one knew about it and she called the cops.”

“She doesn’t really have a lot friends at this point,” said Bryce McGregor. “She’s just trying to make her way through it.”

Even though it was written before she was born Meister says the high school in "Speak" feels familiar.

“Like one thing can make everyone turn against you or if you do one certain thing, the entire school will know and then people won’t want to be friends with you,” Meister said.

“I think that it is important for high school to read this type of book because then all the kids understand what some kids go thought and that this kind of stuff happens,” said classmate Tori Horn.

Author Laurie Halse Anderson has heard from countless students first-hand as she’s toured the country to talk about "Speak."

They asked questions like whether she had the same experience as Melinda, Anderson said yes. She was raped at 13.

“I learned very early on that teenagers needed me to be honest about what I had been through,” Anderson said. “And I needed to model for them what a survivor looked like.”

Part of that is being unafraid to talk candidly about sexual assault.

“You can do that now. You can say what happened to you — I think that we need to do that in order for people who haven’t been through the experience to understand how widespread sexual violence is and how devastating.”

Anderson said people often come up to her and share what happened to them. She thinks it’s because of the book.

“People have told me that it’s the first time they had read about somebody who had been through what they’d been through,” Anderson said. “People who are feeling silenced because of a trauma are often lacking the words to discuss their experience.”

The teacher who assigned "Speak" at Coconino High School is Jessie O’Keefe.

"I pick novels I feel like my students can connect to and can understand and will teach them some kind of a larger lesson about life," O'Keefe said.

"That is incredibly rare in high school English."

Mariana Dale/KJZZ
"I pick novels I feel like my students can connect to and can understand and will teach them some kind of a larger lesson about life," said Coconino High School English teacher Jessie O'Keefe.

In the six years O’Keefe has taught "Speak," only one parent has ever complained. And students can always choose an alternate assignment.

“I think that it has to be taught in a serious nature ... you have to have those difficult conversations you have to make sure your students feel comfortable in reading it. They have to be OK.”

She uses the text to teach vocabulary, persuasive writing—they discuss how today’s social media and cell phones might have changed Melinda’s world. There are less academic lessons too

“The book teaches self-advocacy. It teaches mental healing, it teaches about mental health, it gives students something that they’re able to really truly relate to.”

'A Book Makes A Statement About Life'

Not everyone agrees that teenagers should tackle such tough topics.

Parents and educators have banned or challenged whether "Speak" can be taught in more than a handful of states including California, Missouri and Florida.

"With 'Speak,' this issue of sexual assault was vaulted to the national consciousness,” said Arizona State University English professor Jim Blasingame. He loves the book.

“A book makes a statement about life and it is the reader’s role to decide is this a true statement,” Blasingame said. “Does this help me to understand my life and the world?”

An Interview With Laurie Halse Anderson

Randy Fontanilla
“I learned very early on that teenagers needed me to be honest about what I had been through, about the struggles my families went through,” said Laurie Halse Anderson. “I needed to model for them what a survivor looked like.”

The Show’s Lauren Gilger spokes to Laurie Halse Anderson about her newest book, "Shout," a poetic memoir out March 12. Here are some highlights from the interview:

Your book-signing booth and when you go to schools, it becomes a sort of confessional. Why do you think people confide in you?

“I think that they recognize themselves on the page and for many people have told me that it’s the first time they’ve read about somebody who went through what they went through.  People who are feeling silenced because of a trauma are often lacking the words to discuss their experience, what they’ve been through.”

In this new memoir you’re writing about, among other things your own sexual assault when you were young. Why tell your story in this way and why in verse?

“'Shout’s' this kind of weird hybrid, isn’t it?  Part memoir, part manifesto and all poetry … I learned very early on that teenagers needed me to be honest about what I had been through about the struggles my families went through.I needed to model for them what a survivor looked like. When it came time to write this I felt that poetry carries so much more weight that that was the form I felt could really convey the marrow meanings of these  experiences. The other thing about poetry is it gives the reader the space to breathe.”

"Shout" holds in it a pretty powerful call to action. It doesn’t sound like from the book you think we’ve finished this work?

”We have to start talking about our bodies. We have to start talking about what healthy sexuality is. I wish every single school district in America would embrace a rational comprehensive approach to sex education that talks about our bodies in developmentally appropriate ways to kids ... We need to find a way as parents … to talk about how to talk to our kids about this. Parents should be talking to our kids about sexuality and sexual violence as often as they talk to their kids about driving.”

Laurie Halse Anderson will be at Changing Hands bookstore in Phoenix on Sunday, March 31 at 4 p.m. with Kathleen Glasgow, New York Times bestselling author of "Girl in Pieces."