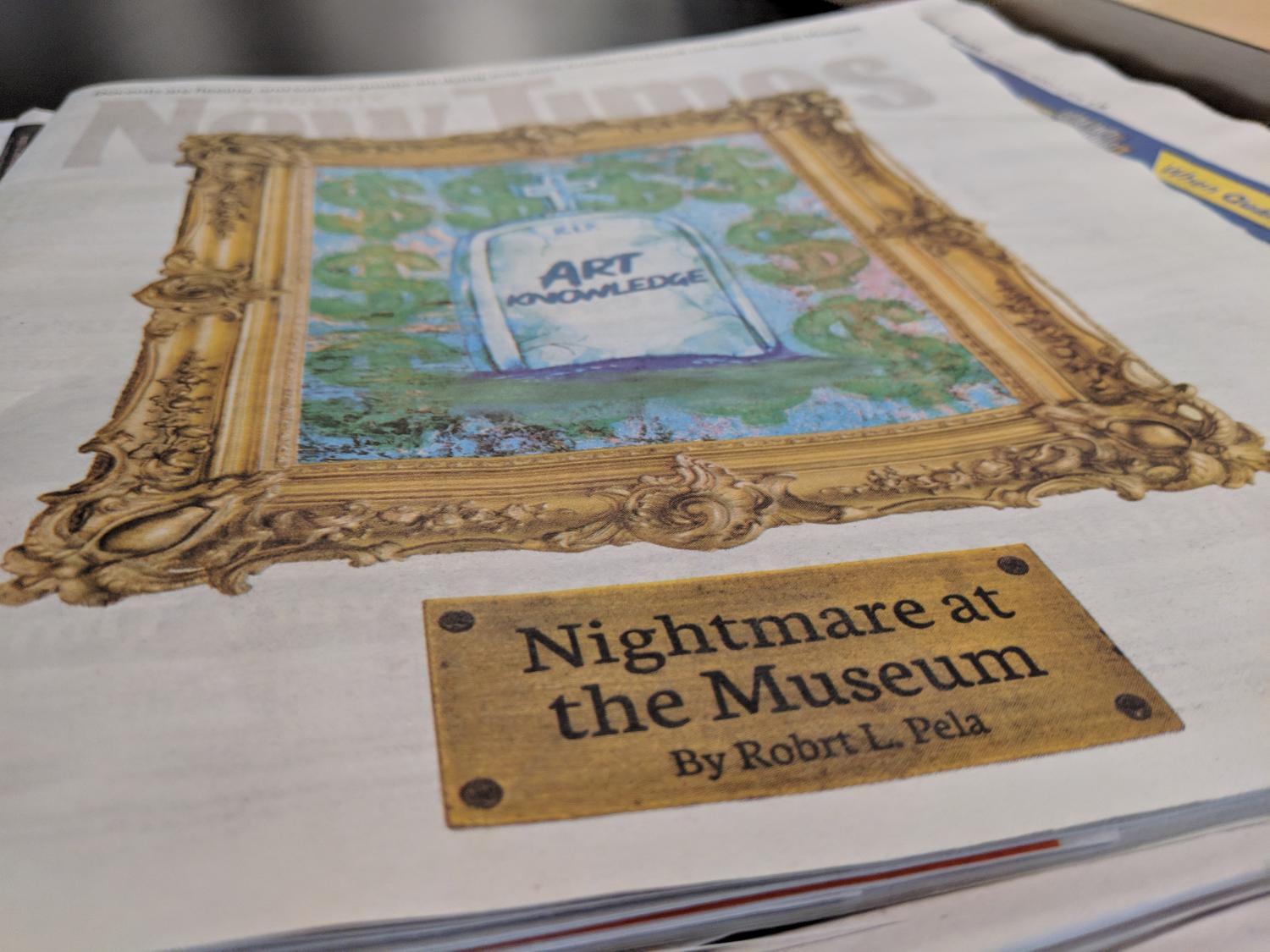 STEVE GOLDSTEIN: Four years ago, the Phoenix Art Museum got a new leader and she was quite different from her predecessor. Amada Cruz came to the Valley from San Antonio to succeed Jim Ballinger, who had been with the museum for 40 years and its director for more than 30. Cruz was hired for a number of reasons, but two near the top of the list included fundraising and moving the museum toward more diversity and try to attract more people of Latino descent in a community with around 40 percent Hispanic residents. Some would consider Cruz to be a success, but others are extremely critical of her tenure. Robrt Pela's cover story in this week's Phoenix New Times attempts to capture all of that, and he is with me to talk about it. So Robrt, let's begin by focusing on Amada Cruz. What has her mission been?

ROBERT PELA: Amada Cruz was brought in from a museum in Texas to fix the financial troubles of the Phoenix Art Museum, which is a great idea because without the money, there's no museum. We can't bring in the better exhibitions. We can't keep the doors open. She appears to be going about it by doing two things. One is going after big corporate bucks. She's bringing in lots of dough. She's also, according to all reports, alienating everybody in town. Many of her staff — I think a dozen people — left within the first six months after she was here. And that's not — there's nothing unusual about that. Someone new comes in to run a large institution and they get rid of some people who are maybe ineffectual. A bunch of people who've been around for a long time who don't like change take off. No revelations there. But, from all reports, she's running people off with a lousy attitude. And when you are talking about docents leaving —

PELA: So let's talk about the docents for a moment. Let's say that the docents in any museum, in any town, are people of a certain age who don't like change. Just for the sake of the conversation, let's just say that that's who docents typically are.

GOLDSTEIN: It sounds like you're really exaggerating right now.

PELA: A new director comes in and a bunch of changes are made to the docent program and a bunch of docents say, "Well I've been here for 35 years and I don't like that, so I'm leaving." Okay. No surprises there either. But when more than 100 docents leave?

PELA: I think it worked out to about 22 percent, last year, left the docent program. That's kind of shocking, and when I asked Amada Cruz about this, she said, "Well do you have any idea how big docent organizations are at other museums?" No, I didn't, and I don't know that I care.

PELA: Because it's not the point. When you have, and by my last count, 101 docents leaving in the space of one year, there's something going on.

GOLDSTEIN: And it's been a museum that has, in large part, really, when we're talking about more than 400 docents, has really leaned on that program to do a lot of different things. So it would seem, even with those people who don't like change, it would seem that to drive that many of them away, not 20 of them, not 40 of them, more than 100, seems like there's something — either a disconnect or an intentional disconnect right there so —

GOLDSTEIN: I mean, do you want to weigh in on that?

GOLDSTEIN: So one of the things that struck me about reading your piece is that some people who had been there for a long time, who had said some things she didn't appreciate, they were sent letters. They weren't, let me have you in person, you've been here 20 years, there's a directional change and maybe you don't fit anymore. It wasn't like that.

PELA: So a fourth grader can tell you that you don't fire someone who has been volunteering and raising and donating money for 35 years — you don't fire her in an e-mail. First of all, how do you fire a docent? I can't ask that question often enough because it's just — how do you fire a volunteer? In an e-mail? And I read a lot, I read more than a dozen of these e-mails from people who'd been fired from the volunteer program at the Phoenix Art Museum, and some of them are — I just, I kind of want to keep them, like, as an example of how to be the meanest person in town because, I mean — so the language from at least one of those e-mails is in my story, and it's shocking. Yes, Amada Cruz fired volunteers via e-mail without first meeting with them. It's bad form, and it's bad form that speaks to this notion that I don't care what you've done for this institution, you don't matter to me, I'm here now, I'm fixing things my way, and if you don't want to stick around, that's perfectly okay with me.

GOLDSTEIN: As people of Phoenix, how much pride do we take in the museum itself, and how much do we say, okay, well Amada Cruz is taking it in a different direction. Maybe that works, maybe it doesn't. I guess, how much of a community resource is this supposed to be, and how much is it supposed to be something that someone can raise big money for and turn into something different?

PELA: So that is the unspoken point of my story, which is ultimately, who does this matter to and does it matter at all? Because she's going to fix the museum financially, presumably. I mean, on paper, it looks like she already has. But let's say that she has fixed things for us and that's good enough. The thing that the Phoenix Art Museum and that Jim Ballinger and that past directors of that museum have created, is over with, and we are going to have to sit back and find out if that matters. The other thing that's true is, we have a long history of looking at what other cities do and taking their best practices and trying to overlay them on our institutions, and that's a crummy idea, because we took a cowboy approach to cultural institutions, let's say, and as we refined that, and made it work, it worked. So, we had 434 docents, which is a heck of a lot of docents, so you can look at that and say well that's kind of a yokel way to do things, to have a whole bunch of volunteers in control of a bunch of stuff that they probably shouldn't be in control of. However, it worked! And let's just talk about the human element for a quick second. It's a rotten way to approach a cultural institution. A museum may be a business to begin with, but it is also a place that is run by and there for to address our emotions. So we go to look at a beautiful painting and were moved by it, and if we stop going there because our great aunt Elizabeth was treated badly, we're not going to be moved by that painting. It does have a trickle-down effect.

GOLDSTEIN: Writer and critic Robrt Pela. We've been talking about his cover story for Phoenix New Times about the Phoenix Art Museum, called "Nightmare at the Museum. Robrt, thanks.