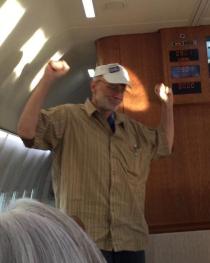 President Barack Obama announced that the U.S. would be re-establishing diplomatic relations with Cuba on Wednesday.

Republican Senator Jeff Flake has long been a proponent of ending the embargo.

With the release of American Alan Gross Wednesday morning, the U.S. policy, which many considered to be a failed one, is no more. Flake said while there are some among the Republican rank and file who oppose Obama’s new policy, he supports this new approach.

"My sense is that most of my colleagues feel we are long past due," Flake said. "50 years. 50 years, and so I think politics are good. Certainly the policy is right and good politics usually follow."

Flake was joined by Vermont Senator Patrick Leahy and Representative Chris Van Hollen on the flight carrying Gross home. Gross was arrested in 2009 by Cuban authorities. He was accused of being a spy and sentenced to 15 years.

The diplomatic breakthrough is surprising news to the Cuban immigrant community in Phoenix.

Joanne Morales is the director of refugee programs at Catholic Charities Community Services. She said the feelings among community members seem to be mixed.

"I think a lot of people want to see change, but they’re waiting to see how its going to look," Morales said. "Obviously people are looking forward to being able to be reunited with their families and being able to support them better."

Among the anticipated changes, the policy will increase the amount of money Americans can send to Cubans from $500 to $2,000 every three months.

One of the first Cubans to settle in Phoenix said he almost cried when he heard the news.

"This is big for us," Alberto Gutier said. "Trust me. This is big."

Gutier arrived in this country when he was 17. He and wife later raised their five kids in Phoenix. He’s deeply critical of the Cuban government and its current leader Raul Castro.

"I hope that one day democracy returns to Cuba, and that the same time, this could be the first step," he said. "I hope that something good happens out of this to the Cuban people."

Gutier says he hopes this announcement will lead to ending the long-standing economic embargo on Cuba. Gutier says that only hurts the country’s citizens, not the government the measure was meant to punish.