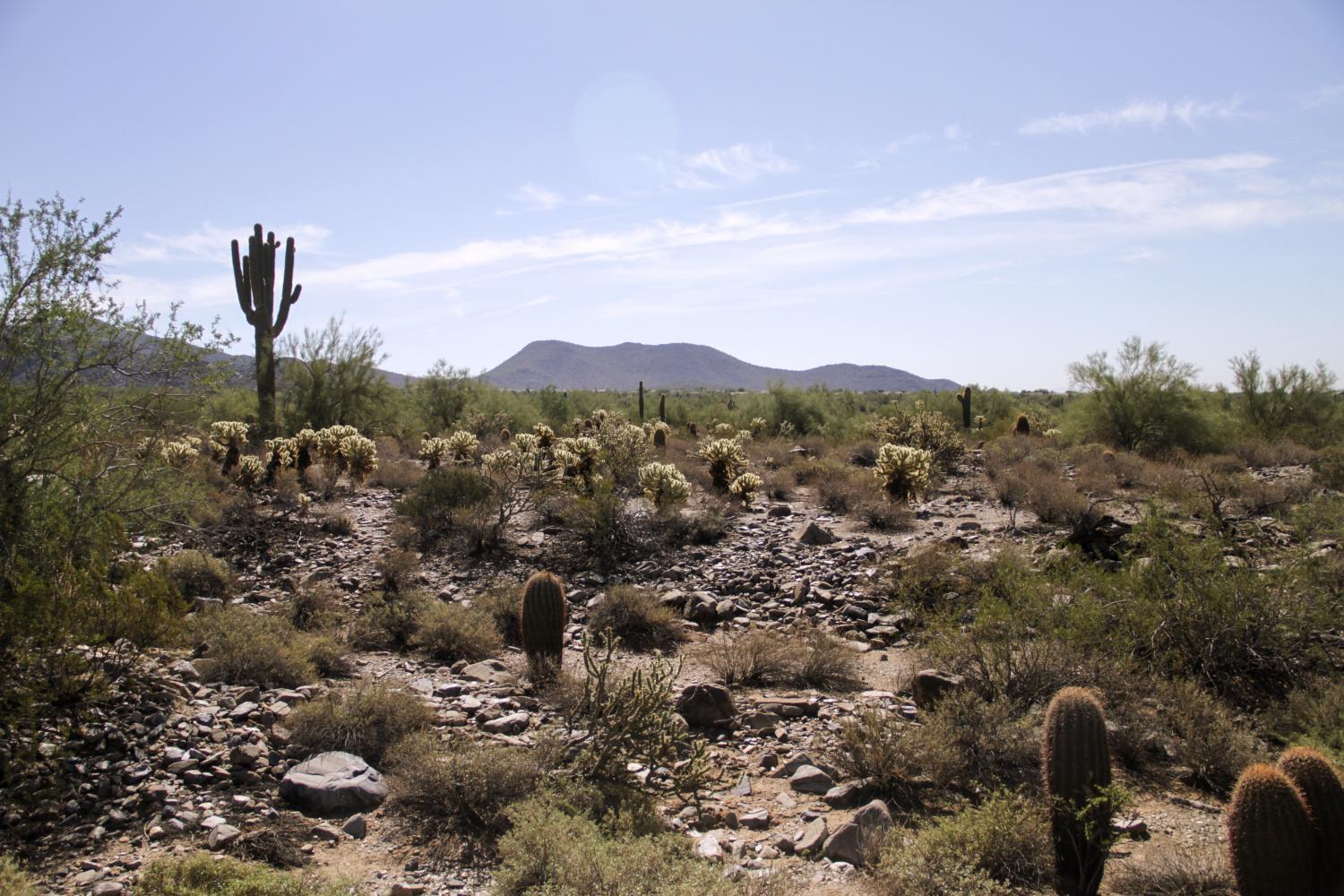 Mariana Dale/KJZZ
The Sonoran Desert stretches from the southern third of Arizona into Baja California and Sonora, Mexico.

STEVE GOLDSTEIN: Cactus theft has been a problem in Arizona and around the Southwest for years. But some scientists and land managers believe the problem is getting worse and as the market for cacti is evolving so are the methods poachers use and the types of cacti they're targeting. Flagstaff-based freelance journalist Annette McGivney has written about this in an article for The Guardian called "Yanked from the Ground" in which she refers to "underground cactus cartels." Our co-host Mark Brodie spoke with her about it.

MARK BRODIE: How big of a problem is stealing cactus at the moment?

ANNETTE MCGIVNEY: Well, it's definitely a big problem for the rare cactus species that are in the Sonoran Desert. The problem has always been there, it's evolved over the last few decades. I think in the 1990s the problem was the housing booms in Tucson and Phoenix caused people to, you know, have a need for cactus for landscaping and so there was cactus theft of saguaros and barrel cactus that were being stolen for landscaping. Now it's transformed to meet demands on the internet for people that are all over the world especially in Europe and Asia where cactus are really trendy plants to have in their apartments. And so these smaller more rare cactus are being stolen from the desert and that's a fairly new phenomenon.

BRODIE: Well, it seems like kind of a good news-bad news situation. The good news being that people are really interested in cactus and that they've become very fashionable and very trendy as you mentioned. The bad news is the way the people are going about getting them, in some cases which is stealing them and you know, digging them up and trying to take them home as opposed to just going buying one.

MCGIVNEY: Right. And the thing about cactus specifically in terms of like house plants is that with a fichus or an ivy plant it's easy to grow in a nursery from seed and quickly and people can buy it that way. Cactus even small cactus, you know, that at full maturity, like maybe the size of a tennis ball on my research that I learned those small cacti take decades to get to that size. So I saw cactus that had been stolen that were like the size of a tennis ball that the nursery owner said they were 40 to 60 years old.

MCGIVNEY: So you know, if suddenly a cactus becomes trendy in South Korea, you can't wait 40 years to meet that market demand by growing it in the nursery so that's why they're being stolen from public lands.

BRODIE: For the people whose job it is and whose interest it is to try to prevent cactus from being stolen. Does the fact that some of the more trendy types of cactus now are smaller as opposed to giant swallows, for example, does that make it harder for them to see what has been stolen and try to track them down or track the people down?

MCGIVNEY: It does. I mean it's a lot easier to smuggle a cactus the size of a tennis ball out of the country than its saguaro. That's like 50 feet tall and so people are putting them in their suitcases. They're, you know, in their cars. My research showed that a lot of them were just being mailed through the postal service and so the people that are trying to protect the cactus, the ones that are most aware of this problem are the scientists. Some of the botanists that I interviewed that are trying to research like endangered cacti, like the Acuna cactus, and they'll go to a place where they've been studying a plot of these and the cactus are all gone. All of a sudden. So it's a very difficult thing to police.

BRODIE: How lucrative a market is this?

MCGIVNEY: It's well, it's I guess not as lucrative as, you know, like drug trafficking, but it's pretty lucrative. Like a mature Ariocarpus Fissuratus, you know, can sell for $50 to $100 on eBay. Some really rare cacti can sell for what I found on my own Internet researching, like for $500 to $1,000 dollars sometimes. So you know, like you multiply that times a thousand and it's good money.

BRODIE: So what are people trying to do about this? I mean you talked about how it's a little more difficult to find and spot somebody stealing smaller cacti like how do they try to prevent it?

MCGIVNEY: Well there's an international organization called CITES, that's the Convention for International Trade and they are trying to enforce regulations that promote greater inspections at ports of entry and virtually every species of cactus in North America is on the CITES list for protection. So they're trying to raise awareness and you know get airports and border checkpoints to be more watchful for cactus.

BRODIE: I wonder if that's a bit of a difficult sell though when you think about all the things that customs agents and border patrol agents are looking for and doing and trying to detect if cacti is fairly far down the list on things they're concerned about.

MCGIVNEY: Right. Definitely. I just, for my own information recently I was in, going through Phoenix Sky Harbor Airport as my bags were going through security and I said "do you guys ever get cactus coming through, you know this conveyor belt?" And he said sure, and I said "well do you ever ask them, you know, where the cactus came from? Like how do you know it wasn't stolen?" And the security guy said, "well, that's not our job," you know, and so you're right. Like, they're not worried about that. So there needs to be a shift because literally species that are endangered could become extinct from the wild like it's at that point now. I think ultimately what's going to turn this around is awareness on the consumer end and even internationally around the world. I feel like if people knew what was happening in these environments, where the cactus that they love, that they're being stolen, you know, that they might be more sensitive about making sure that they were ethically sourced. There's attention now given to, like, coffee that it's ethically grown. And that's a common thing now for people to pay attention to that. I feel like the same thing needs to happen with cactus.

BRODIE: All right that's freelance journalist Annette McGivney. We've been talking about her story in The Guardian about cactus theft in the Southwest. Annette, as always, good to talk to you, thank you.