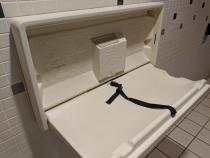 It started out as a bill that would require changing tables for babies to be installed in some Arizona public restrooms. But a group of mothers who have children with disabilities are trying to require universal changing tables that would serve both babies and adults.

The bill aims to require public entities to install at least one adult changing station.

Courtney Burnett, a mom and special needs advocate, says this bill is about accessibility for her 14-year-old daughter.

"To not be changed on a park bench, or the floor of my minivan or even the bathroom floor. We’ve had to lay her down on there in order to get her changed. This would hold weight of youth or adult," said Burnett.

The bill appeared to be gaining momentum. It passed the Arizona House Health and Human Services Committee with bipartisan support. But it stopped in the rules committee.

"The bill stopped in rules because I believe its bad public policy to mandate even in public places, but the mandate is what I have a problem with," said Kern.

Kern says there are other ways to get universal changing tables, saying funds could be included in the budget.