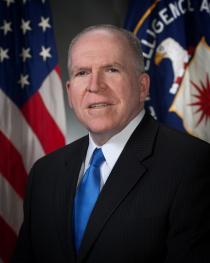 Steve Goldstein: President Trumps battles with theU.S. intelligence community started early in his administration. Thanks to the Russia investigation and of continued ever since we caught glimpses of it again last week when he said he trusted the North Korean dictator Kim Jong un was not responsible for the death of an American student who was imprisoned in that country for more than a year. And the congressional hearing featuring former Trump attorney Michael Cohen rekindled thoughts about how connected the Trump campaign may have been to Russia and how FBI Director James Comey was fired possibly because of his interest in pursuing that connection. Former CIA Director John Brennan has been consistently willing to challenge President Trump's negativity toward the intelligence community. Brennan was in the Valley last week as part of ASU's Barrett Honors College's John Jay Rhodes lecture, and I spoke with him. I started by asking Brennan why he thinks the president continues to argue publicly with the U.S. intelligence community.

John Brennan: Well it's really quite puzzling because the U.S. intelligence community is the best intelligence in the world. That doesn't mean it makes no mistakes and sometimes it does — it's an imperfect science. But every president that I've worked for has relied heavily on the intel community input the expertise their experience in order to try to make the best decision possible that affects our national security. And so dealing with really intractable issues like the North Korean nuclear program or Iran or terrorism or China or Russia, Mr. Trump and others really need to be able to leverage the expertise that resides within the intel community. He can challenge it he can question it and he doesn't even have to agree with it but he should in fact be able to take it on board and use it as part of the process that he is going to have to make these very important and consequential decisions.

Goldstein: I'm struck by the fact in talking with some some former members of the intelligence community that they have no problem with being criticized behind the scenes in private to discuss how a president thinks this or that. But the idea of being, having a tweeted about or without a base of knowledge is extremely frustrating to them, I'm sure it's frustrating to you as well. Does that affect people in the day to day people who are just trying to do their jobs?

Brennan: Well I think it is quite dispiriting if the first customer is going to speak in such derogatory manner about their profession, their work, their assessments. I've always told my people when I was in the government and the CIA to disregard a lot of the things that politicians say, but never have I experienced something, a situation like we have now where the president of the United States says these things very publicly, so that the professionals in the CIA or the FBI are the National Security Agency, they know how important their work is and they need to be able to keep their heads down and disregard a lot of things that are out there. But it is demoralizing. I think Mr. Trump and others need to understand that their words have impact and it can have very negative impact if it's going to be directed in a very very negative manner against those Americans who do their utmost to keep their fellow citizens safe.

Goldstein: As we said earlier in 2019 we do not know what will happen in November of 2020. Obviously if this is a one term president can it be seen as something of a blip when it comes to how someone has treated the intelligence community when it comes to using social media or is this something that has in some ways opened a Pandora's box that could cause problems maybe with one party maybe with just certain candidates?

Brennan: Well I think this is a very abnormal presidency and it's very unlike any of the administrations that I have experienced. After Mr Trump, I'm hoping that we're going to get back on track and that there's going to be the return of decency and integrity and honesty at the highest levels of our government. But Mr. Trump as you know, pulsed a sentiment here in this country that I think is worrisome. You know whether it's a sentiment of trying to recede into the past and trying to prevent the natural progress of modernization, globalization, the fact that Mr. Trump continues to say "America first America First" which is being interpreted around the world that the United States is receding from its global responsibilities. So I'm hoping that Mr. Trump's administration and his policies are an aberration, but you know our country is polarized right now and I'm hoping that we're going to be able to get back to the times when we're able to work across the aisle, irrespective of political party, and to do what's in the best interests of our national security and our future prosperity. I'm hoping that's going to happen, but it's really going to be up to the future leaders of this country.

Goldstein: I do want to ask you about political discourse a bit more. Let me ask you one more question about with President Trump's words. Does that make this country any less safe?

Brennan: Well I think with all the distractions in Washington now with what's going on with the congressional investigations and the political turmoil that's been generated since the last presidential election, it really is distracting I think our legislators our, government officials, from focusing on those issues that really need attention. You know whether it's the North Korea nuclear program or whether it is issues related to border security or how are we going to address those needs of the Americans as we continue to evolve. And with a lot of the requirements as far as employment and jobs and whatever. So as they engage in these political battles they're not dealing with the crises of the day, the challenge of the day. All of the assaults that we experience every day in the cyber realm, you know what we're going to do about the climate change that is taking place and it's having a direct impact on our lives here in America and around the world. So I do think it's detrimental to national security as our partisan politics now dominate the corridors of Washington.

Goldstein: You mentioned you've had the willingness to respond to President Trump sometimes on talk shows, sometimes on Twitter, sometimes in speeches. There are some who will say it's really difficult to — I was reading recently about the John Kerry and the swift boat ad for example and he was criticized later for not being aggressive enough in responding to it. But then others would say well then you're giving it weight if you respond to it. Are we in a difficult boat right now in terms of whether to respond to things that are clearly not true and yet does it then give them more heft?

Brennan: It really is quite a dilemma. And I had to face that when I was at CIA, is that if you start to refute all of the bogus information is out there you'd be spending your whole day doing that. And when you don't do it then people are going to say, "aha, well that must be accurate." And there's just so much more information that gets out in all different ways. And I think the media, the networks, the papers, and others need to do a better job quite frankly of fulfilling their responsibilities. I see too much conflation between reporting and opinion. They need to be kept separate. And too often there are individuals or news outlets that purport to present information as reported facts. But really it is opinion and it is trying to promote a certain policy or a political view. That's what can confuse people. We just have so much opportunity now to get information from all different sources of all different reliability.

Goldstein: One last question related to your experience in the intelligence community. Can anyone really understand what it's like to be in that until you've actually done it? If you try to explain to someone "this is what I did" or whether it's a president who agrees, disagrees or just the average person. Are there things that just go on that we couldn't possibly fathom?

Brennan: Well there's certainly no substitute for actually living in that environment. And you know, people will always ask me whether I saw the TV program homeland and I said "No I never watched it" because I would live it every day, and I knew what was real and what wasn't real. And too often early on I would watch, you know, different movies and I would, my wife would be so upset with me because I keep saying "well that doesn't happen that's not real that's false." It's important for intelligence officials to try to explain the role of intelligence, the challenges that the intel community faces. I think too often the intelligence community has been rather insular and isolated and that leads to a lot of misconceptions as well as a lot of myths out there about what the CIA or the NSA or FBI are doing. These are organizations that have very dedicated women and men who are doing their level best to help keep this country safe and secure. One of the reasons why I talked to a lot of universities is I try to encourage young Americans to think about public service, you know, whether it's the intelligence, military, diplomatic corps or law enforcement efforts, to give back to this great country of ours.

Goldstein: That is former FBI Director John Brennan. I spoke with him last week in Tempe.