In a damning depiction of Donald Trump, the president's former lawyer on Wednesday cast him as a racist and conman who used his inner circle to cover up politically damaging allegations about sex and lied about his business interests in Russia throughout the campaign that sent him to the White House.

For much of Michael Cohen's congressional testimony in from of a House committee, Republicans on the House Oversight and Reform Committee have called President Donald Trump's former lawyer a liar.

Rep. Paul Gosar of Arizona and other Republicans say Cohen can't be trusted for what he says about Trump because Cohen pleaded guilty last year for lying to Congress.

At the hearing, Gosar put up a sign that read "Liar, Liar Pants on Fire" and called Cohen a "pathological liar."

Cohen turned the focus on the president, saying lying became "the norm" working for Trump.

A spokesperson for President Trump’s re-election campaign is dismissing Cohen’s testimony saying it’s coming from a felon and a convicted liar. Cohen has been cooperating with prosecutors and is expected to begin a three-year prison sentence in May. 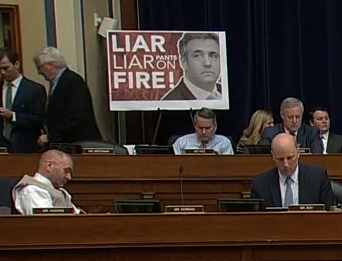 C-SPAN
At the hearing, Arizona Rep. Paul Gosar put up a sign that read "Liar, Liar Pants on Fire" and called Cohen a "pathological liar."