What Does The Phoenix Police Union Want In A New Contract?

The union representing Phoenix police officers is negotiating with the city for a new three-year contract. While talks focus on the future, the past remains in the present.

On May 7, 2014, the Phoenix City Council chambers were packed with police officers and their supporters.

The city manager had said Phoenix could balance its budget without cutting services if all employees accepted cuts. The Phoenix Law Enforcement Association, known as PLEA, argued its members should be spared because officers have dangerous jobs and the department was on its fifth year of a hiring freeze.

Ken Crane was PLEA’s vice president at the time.

“So, we’re not hiring, we’re taking pay and benefit cuts,” he said. “This has a net result of demoralizing your police department and your patrol force, OK? And people start looking for greener pastures.” 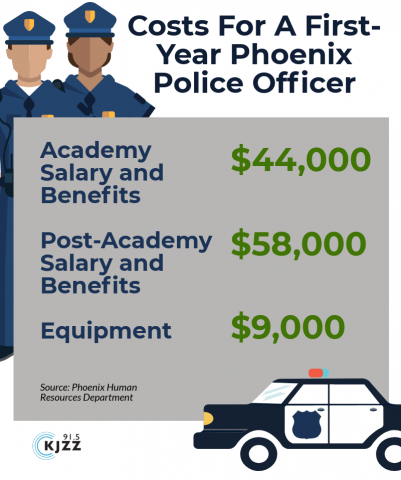 Neither side will comment on specific wage and benefit requests during negotiations, but PLEA President Mike "Britt" London said they’d like to see officers wearing body cameras get a 5 percent hourly increase.

During recent council meetings some residents, like Maria Sanchez, have criticized the idea of paying officers more for wearing cameras.

“This is absolutely wrong and it’s unacceptable that we are going to be trying to push this forward without even going to the community and talking to them about this,” she said.

Another proposal would eliminate anonymous complaints against officers. Instead, PLEA wants people to sign a complaint acknowledging it’s illegal to make a false statement.

“By giving police access to who is accusing them you open up the possibility for potential retaliation,” he said.

London said they want to save officers from the stress of internal investigations sparked by false complaints.

“We understand that a complaint has to be looked at- anonymous or not,” he said. “But, something that is of a serious nature, an accusation, we need those people to come in and make a statement. You know, they may end up signing an affidavit if it went to court. So we would like to, so to speak, make them have some skin in the game, not just know they can make a frivolous complaint and nothing happens to them.”

About 700 officers are currently eligible to retire. London said it’s important to not only attract new officers, but keep experienced ones.

“A veteran officer can probably take care of a situation, and I’m quoting this out of some magazine I read, but about three times faster than an inexperienced officer can,” he said. “So, that’s a benefit to the community.”

Crane pointed to a copy of PLEA’s 134-page proposal and said, “This is what allows us to recruit and retain good, quality people."

Among other things, the proposal asks for increases in tuition reimbursement and hourly pay for working nights and weekends. The union and the city have until May to reach an agreement.