A Marathoner's Tough Decision To Call It Quits 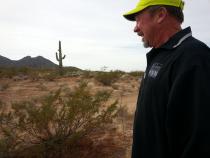 (Photo by Nadine Arroyo Rodriguez - KJZZ)
Joel Backstrom has been running marathons for 40 years. The 60-year-old ran his last race at the Buckeye Marathon. 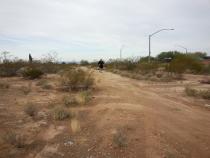 Participating in marathon races takes discipline and training. For one Buckeye man, long distance running competitions has been a hobby for decades. The city of Buckeye marathon was this past weekend and he made this event his last long distance run.

For Joel Backstrom, retirement from running marathons was a difficult decision to make. He has been running the 26.2-mile races for more than 40 years.

“I do this because I like it, not because I’m all hepped-up about my physical condition and health. I like to this it’s my hobby. It’s fun," Backstrom said.

Now 60, Backstrom started racing when he was 22 years old. College and then the Army helped develop this athletic passion. The now-retired school teacher and cross country coach said he runs five days a week and when he prepares for a marathon, the training is very stringent.

”I go back from race day about 14 weeks typically and I make sure I start off at about 25 [miles] a week, but each week it progresses by a few miles. Two weeks ago I did 50 miles, that’s the peak," he said.

Since he moved to Buckeye from North Dakota six years ago, the White Tank Mountain trails have been his training grounds. It's a place Backstrom calls his oasis.

Backstrom takes in the scenery and says that after racing for so long, he has decided to call it quits. His 30th and last race was the Buckeye Marathon. The original plan was to run the Death Valley Marathon as a symbol of the end of his racing career, but decided to do it close to home instead.

“I have thought about this for a long time. It’s just that I don’t want to continue and almost dishonor what I’ve been doing by not performing up to the level I know I’d feel is minimal. And I’m getting to that point," he said.


Eric Heins is a marathon and cross country coach at Northern Arizona University. He said that mentality sounds very familiar when it comes to distance runners.

“You probably will see some aspects where they really start to consider 'OK, what are my limits. What should I begin to tail off or how much could I really handle,'" Heins said.

Heins says the longer one runs the more the practice becomes ingrained in you, becoming part of your routine. When it’s time to stop the runner does one of two things: stop all together or slow down. It all depends on the individual.

“I don’t know if you ever need to stop. Probably it’s a matter of backing off a little," Heins said.

And that’s what Backstrom said he wants to do. He said he can’t stop running all together, but he can’t dishonor the tradition either.

“I still do struggle with it, because the marathon, that 26.2 mile distance, goes all the way back to that battle on the plain of Marathons in Greece,” Backstrom said.

He’s referring to the legend of how the marathon got started. One story goes that Greek messenger Pheidippides ran 26.2 miles to Athens to announce the Persians had been defeated. After he arrived and delivered the message, he died.

“So it’s iconic and I hate to not do that again just because of the mystique of it,” Backstrom said.

He said this is not the first time he’s decided to stop participating in marathons, but he’s certain now it is his last.