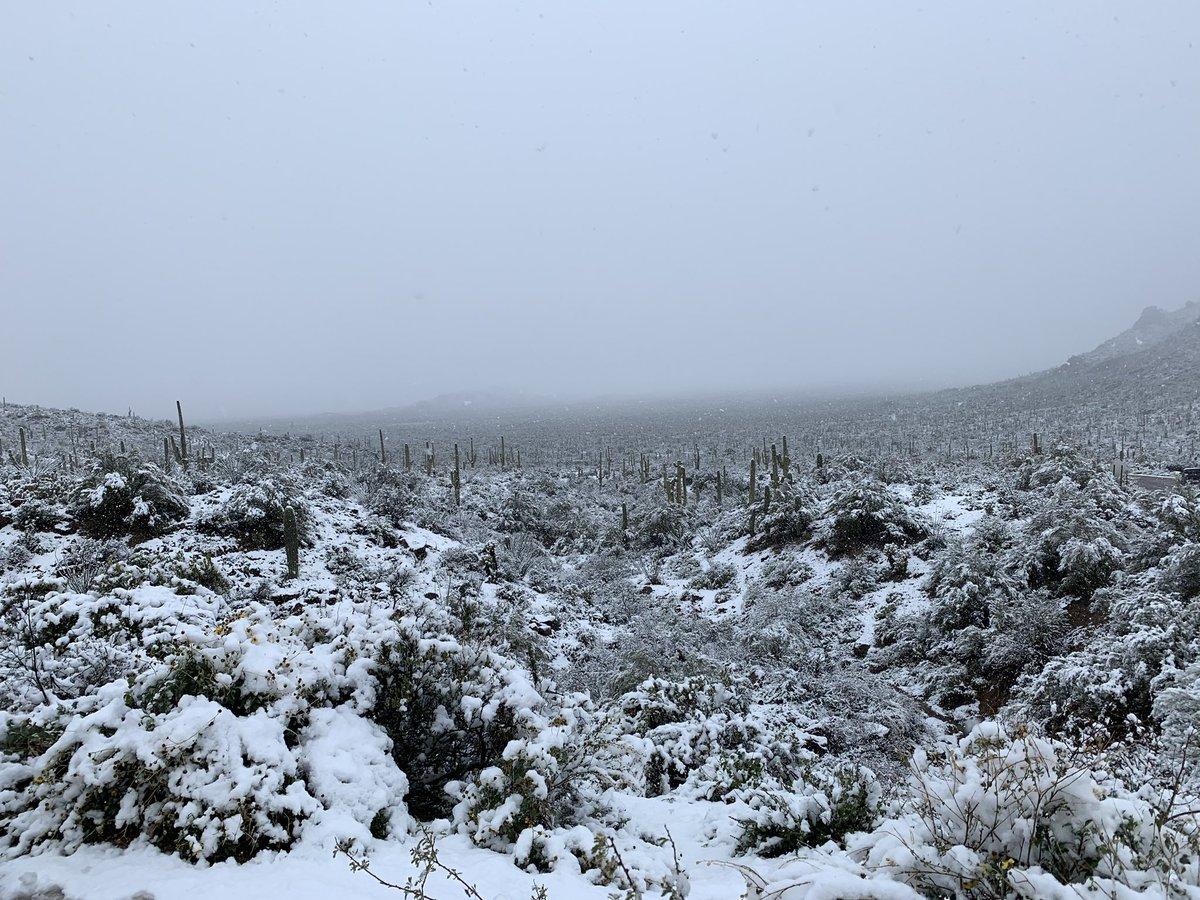 MARK BRODIE: There are still some snow-capped mountains ringing the valley after last week's winter storm dropped rain and some snow in the metro Phoenix area — and record snowfall in Flagstaff. That city actually set a record for daily snowfall on Thursday with nearly 3 feet. Overall, Flagstaff got more than 40 inches of snow. So, has all that precipitation helped Arizona's drought conditions at all? With me to talk about that is Nancy Selover, Arizona state climatologist. And Nancy let's start there. Just how important was the rain and snow we got around the state to the drought conditions we're in and have been in for years now?

NANCY SELOVER: It was very, very important — particularly up north. The snow is critical this time of year for water resources. We had some good rain in October that helped a lot with the short-term drought. But for the longer term drought, which is essentially our water resource, we really need that snowpack. And so this has been really excellent for that situation, particularly in the northeast part, near the Four Corners region.

BRODIE: Now a lot of people saying, "Hey, this means we're out of the drought and all that." But, I mean, presumably, that is not actually the case.

SELOVER: No, it took us a number of very dry years to get into this position, and it's going to take a number of wet years to get us out. We take everything we can get, and we're happy to have it, but we really need this to continue in several years in a row, particularly with a heavy snow pack.

BRODIE: So you mentioned the snowpack. I'm wondering if the rain that we saw in the metro Phoenix area — some areas reportedly up to 2 inches — is that equally helpful to the snow or are helpful in a different way?

SELOVER: It's certainly beneficial. We tend because we're in the southern part of the state and we're not higher elevation, we don't tend to get snow much. Although, we had some right around the Valley, you can still see it on mountains. The fact that the storms came through, for us, it's going to always drop rain. Sut when we get that heavy of a storm, it means, well, we're getting heavy rain down here, typically we're getting heavy snow in other places. Even Tucson got snow. The southeastern part of the state got snow in a lot of the higher elevations, and that's really good for the forests. And even when they get rain, it's good because it soaks that soil, and that's really, really helpful. Also, it seeps into the groundwater system, so when we get flows coming down the Gila River in the Salt River, that water percolates down into the groundwater system, that's very beneficial as well.

BRODIE: So you referenced that Tucson got some snow. Obviously, parts of Maricopa County, north Scottsdale and some of the outer fringes of the Valley also got some snow. Other than the fact that it's just kind of cool and unique to see that in this desert environment, does that do anything for our water supplies?

SELOVER: It does help our water supply, for sure, and it also helps the vegetation. So it helps particularly if we get into some of the lower, lower elevation forest. It starts bringing that soil moisture up, and so the trees are better able to generate sap, because they're able to tap into moisture. And if they're if they dry and they don't have a lot of water available, then they don't, they're not able to generate sap. And the sap is one of the things that helps them fight off things like the bark beetle. So we're always happy to have whatever kind of precipitation is going to help soak into the soil.

BRODIE: When you have a situation like we have now we're Flagstaff, for example, saw record snowfall, does that in any way make up for years past when it got, maybe, less-than-average snowfall or certainly less than what they've gotten now?

SELOVER: It does when it makes its way into the groundwater system, into the aquifers and into the reservoirs. From an economic standpoint, it's certainly very helpful, because they're going to be able to have a much better snow season. And so the economy of that area is going to be improved.

BRODIE: On a philosophical level, you know, we've just gone through all this debate at the state Capitol over the Drought Contingency Plan. We've heard so much about how it's likely that a drought declaration or a shortage declaration is going to be declared next year in Lake Mead. When you have a storm system like this, is it hard to remind people that, hey, Arizona is still in a drought when they see record breaking snowfall in Flagstaff, snow in the Phoenix area, lots of rain in the Phoenix area over a couple of days?

SELOVER: Yes, it is. The moment we get this kind of precipitation, everyone thinks that the drought's over. It's very much not. For things like Lake Mead and the drought declaration, that's kind of dependent on the Colorado snow. So what's going on up there. Which they've also had quite a bit. And that's good. Part of the issue though, is that the drought declaration tends to be something that the Bureau of Reclamation will do as a forecast, and they do that well ahead of tim. So even if we have a really good snow year this year, they will probably still declare a shortage, because of the mechanics of the way the system works. But Lake Mead is very low. I mean, we're at 40 to 50 percent of capacity, and we need to try and get it back up into the 80 to 90 percent rang. And that's going to take a number of really wet years. Remember, we continually have more people moving here, and we continue to have more people using water. So we really need to build that back up. So just holding our own, which this season may well do, that may bring us up a little bit. Just holding own isn't good enough. We really need to start building that back up.

BRODIE: So we really need several years of what we saw over the past couple of weeks and what we might see going forward.

SELOVER: Oh, very much so. On fact the pattern that we've been having this year is kind of what we used to have as a typical pattern. Storms moving down the coast off of California and then coming in Southern California and across into Arizona. That's the normal pattern for the jet stream and the winter storms. And in the past 20-something years of drought, we have seen that very few years. The more years we see that pattern the better off we are. So we're hopefully that we could move back to a more normal pattern, as opposed to the drought pattern we've been seeing.

BRODIE: All right. Nancy Selover is Arizona state climatologist. Nancy, good to talk to you,.