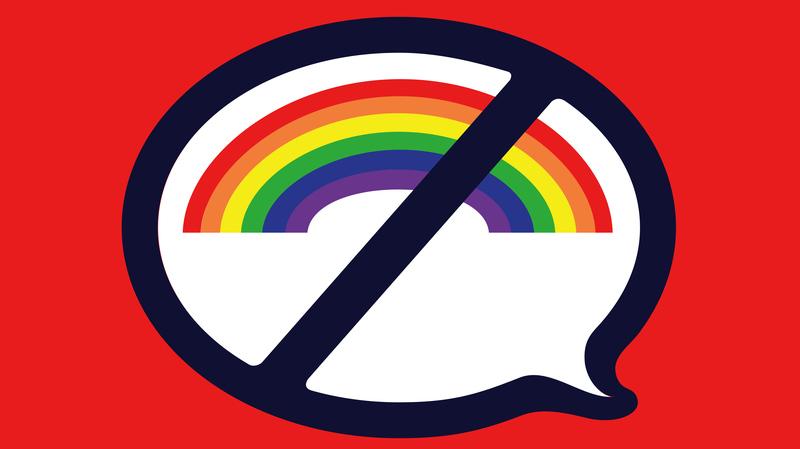 For the fourth year in a row, Arizona lawmakers appear unlikely to revise a law that limits how public school teachers can talk about LGBTQ relationships in health classes.

Arizona is one of at least seven states with curriculum laws around LGBTQ issues, according to the advocacy group GLSEN. But of all the state laws, Arizona's is the only one that bans promoting "a homosexual life-style," says University of Utah law professor Clifford Rosky.

"This is not about gay sex," Rosky explains. "This is literally about whether it's OK to be gay and to talk about people who are gay."

The Arizona law controls HIV/AIDS instruction in public schools. It bans teachers in those courses from portraying "homosexuality as a positive alternative life-style" or suggesting there are safe ways to have homosexual sex.

Like many of the other state laws, Arizona's was created in the throes of the HIV/AIDS epidemic, and after a 1986 recommendation from the U.S. surgeon general that HIV/AIDS education start at an early age.

"Rather than opposing it, they began to say, 'Well, if we're going to teach teenagers about HIV, then we have to make sure that we're not teaching them how to be gay or how to have gay sex or things like that,' " Rosky says.

'If You Don't See Representation Of Yourself, It's Hard To Feel Safe.'

While Arizona's law is limited to HIV/AIDS education, in practice it's applied more broadly — sometimes to sex education.

She says her district tried to pass a new sex ed policy in 2016, but abandoned that effort after being advised that they risked violating the law.

"To me, it blatantly just doesn't protect LGBT kids and it's deliberately saying that cisgender heterosexual kids deserve safety and sex education while LGBT kids don't."

Thurston says he feels comfortable at school, where he's the president of the Gay-Straight Alliance club. But that's not the case for many LGBTQ students in Arizona.

According to the latest annual survey from GLSEN, 71 percent of the state's LGBTQ students reported being verbally harassed at school.

"If you don't see representation of yourself, it's hard to feel safe," says Caryn Bird, co-chair of GLSEN Phoenix.

The organization also found that LGBTQ students in states with such laws are less likely to have educators who support them and more likely to hear homophobic remarks.

Kelly Muchmore, a Tempe high school Spanish teacher and Gay-Straight Alliance club sponsor, says, "I feel like this law or laws like it prohibit schools and districts from presenting information in that unbiased way. That serves to further marginalize students that are already feeling in lots of cases isolated or marginalized as it is."

"Teenagers ask questions and they ask a lot of questions," Harvey says. If they ask if he has a boyfriend, the answer is yes.

Still, Harvey believes Arizona's current law contributes to an environment where LGBTQ teachers feel like they have to be cautious.

Every year since 2016, Arizona Sen. Martín Quezada has tried to change the HIV/AIDS education law to be more inclusive.

"Regardless of what type of sexuality our students are, we want to give them medically accurate information," the Democrat says.

His bill would strike the law's current restrictions around discussing homosexual relationships.

This week, the state's Republican leadership once again declined to advance Quezada's bill. Sen. Sylvia Allen, who chairs the committee where the bill could be heard, did not return NPR's request for comment. But in a 2016 Senate discussion about the proposed changes, Allen said, "We have to also have respect for people who are sending their children to school just wanting their children to get educated and not indoctrinated or taught something that is contrary to maybe what they believe and what they want for their children."

Then-Sen. John Kavanagh, also a Republican, said, "I don't think my tax dollars or any tax dollars should be paying to promote the homosexual lifestyle."

"It's up to the local district whether they offer sex education classes or not, then [up to] parents to opt in," she says.

"The AIDS education law is about teaching the facts about AIDS, not about having discussions about sexuality."

There is a chance the changes could be offered as a floor amendment to other legislation this year, but for now the Arizona policy seems likely to stay.