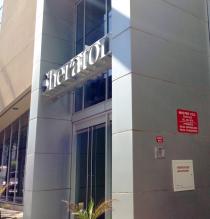 After spending $350 million to build a downtown hotel, the city of Phoenix might sell the building for a massive loss. At least one official said it’s time for the city to put the Sheraton on the market.

The Sheraton in downtown Phoenix is Arizona’s tallest hotel at 31 stories. It has 1,000 rooms and it was built next to the convention center complex at Third Street and Van Buren in 2006. The city got $350 million in bonds to cover construction costs, but the hotel still hasn’t made a profit.

“I think we should divest ourselves of this operation. It’s not a situation that works,” said Phoenix City Councilman Jim Waring.

Waring said the hotel is too big and on a good day it’s only half occupied.

“Unfortunately we are still losing money and it's just an unacceptable situation when we’ve got to worry about other things: fire, police, parks, etc.,” Waring said.

He estimates the hotel has lost $30 million since it opened and it will likely bleed millions more within the next five years. He wants the city to put the Sheraton up for sale. Paul Blue is Phoenix Deputy City Manager.

“Since the Great Recession, the Arizona hospitality market has taken a stronger negative impact than the country at large and in our region in the inter mountain west specifically," Blue said.

Despite the financial losses, Blue said the city made a good investment in the Sheraton. He said the private sector wasn’t willing to build a hotel near the convention center, so the city stepped in in hopes of making downtown vibrant.

“As the convention center thrives and grows and improves, it’s imperative to have a headquarters hotel like the Sheraton available to have the services that the conventioneers require or else they cannot come to Phoenix,” Blue said.

He said without the downtown Sheraton, the Valley wouldn’t have been able to get the Super Bowl and the NCAA Final Four. Blue said it's time for a private investor to come in and make the hotel work. If Phoenix sells the Sheraton before 2016 it will have to pay huge fines under terms of the mortgage.