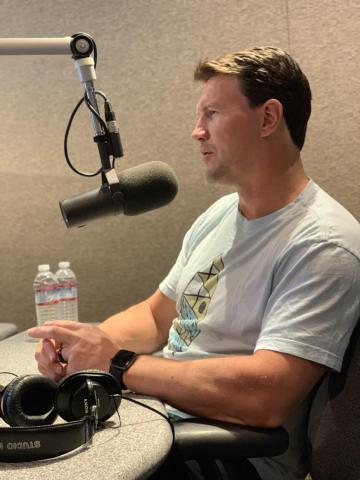 Amanda Luberto/KJZZ
Shane Doan's number will be retired by the Arizona Coyotes this weekend.

STEVE GOLDSTEIN: The Arizona Coyotes have had a less than smooth experience over the two decades the organization has been in the desert, both on and off the ice. But one stabilizing force for the team in the course of nearly all of those seasons was the player who became known as "Captain Coyote," Shane Doan. Coming up on Sunday night at Gila River Arena in Glendale, the Coyotes — the only team Doan as ever played for — will retire his number, 19, putting it off limits to any other player going forward as a way to honor his contributions. Doan is the highest goal scorer in Coyote's history and was a locker room leader as well. He came by our studios recently for a conversation, and I started by asking him whether he misses playing, a year and a half after he retired.

SHANE DOAN: You miss it. There's no question about it. That was probably the thing that I knew I was going to, I just didn't think I realized that I'd miss it as much as I do. But not in the way that I'm like, oh I got to get out there, I wish I was still playing. I'm very happy the fact that I'm done, but I really miss it. It's such a unique environment to get to go to every single day, and the adrenaline and the enthusiasm and the emotion that gets to come from winning and losing, immediate feedback is huge. So all of those things just don't get replaced, and you miss all that.

GOLDSTEIN: What did it take to get ready season after season? I think of, you know, you and Larry Fitzgerald are in the same sort of category, as far as Phoenix sports legends, and he would say that obviously he loves the game. He's still one of the greatest there is. But you know, you have the aches and pains, and you have to take some time to decide mentally and physically whether you're ready to come back. Did you have to go through that, too?

DOAN: Yeah. Any time you're compared with Larry, I'm always excited. It's like, okay, that works for me. Yeah, use that. Without a doubt, there's an element that goes with that. It wasn't as much for myself. I was fairly, like I wasn't too beat up. The one thing that I do know now that I didn't realize is that your feet and hands are always sore playing our sport. The puck hits you in the feet, you got sore, you know, broken toes, or, you know, bad ankles, and the bad ankle's from getting hit with a puck or your hands are getting slashed. And those things aren't things that you miss time for, you just keep playing. And now like to reach into your pocket to grab my keys, that's always something that's nice because I couldn't do that in the past. And then at the end of every season, those would all kind of add up, and you just wanted to kind of get feeling okay again. And once you got feeling okay, I was excited to do it again. And for me it was just fun. I loved to play.

GOLDSTEIN: Hockey is less traditional, especially folks from Canada, than we think about in the U.S. for college football for example. Well, you play high school, you're recruited, you play in college, then if you have a chance, you go to the NFL, whereas hockey, the junior system, what you're sort of taking away from your family, or whatnot, what is that like? How does it develop a passion for it but also sort of make you grow up early?

DOAN: Well yeah, I left home when I was 15 to go play junior hockey, and I have four kids now, and I have two of them that are over — my son's 17, my daughters 20. I would never let them leave home at 15. I mean, they weren't even close. But in Canada, the way that it was set up where I lived or grew up, it was such a small area that if I wanted to, I had to. And I didn't really view it as that scary. I think when you're doing it at that time, you're like, yeah I can handle this. Now I look back and I'm surprised by it. But yeah, the junior hockey, it's an amazing time because your ages from 15 to 20 are so influential in the way that you are as a man. And I think it's great. I was played with a bunch of amazing guys that kind of had character and qualities of leadership that I really admire still to this day, and those are some of my closest friends.

GOLDSTEIN: Did you know early on how great a player you were?

DOAN: Like you go triple A, double A, A, B, C — I was so far down the, and I did well at C hockey, but my hometown had 75 people in it, so we had all these farmer kids that we'd go out and play, and we'd play other towns that had similar situations where they'd have one or two kids that were unbelievable. And then the rest of the kids were just like, oh let's go play hockey. And I remember going on a two-on-one with one kid, and he's jumping over the blue lines as we're going, like, down the ice, and I'm like, I'm trying to score here! But it was like that, and I loved it.

GOLDSTEIN: Let's talk a little about the NHL career. How much frustration did you have? There were times when it appeared the team was going to break through on the ice and couldn't quite pull it off, and you want to be a champion, obviously.

GOLDSTEIN: Were there feelings that, if we just made one more move, we could do it, but some of the other stuff, we just get in the way and didn't quite get there?

DOAN: Oh, for sure. And it was timing. You know, you look around the league and you see the ownership, the real stable ownership and ownership that's — and there's no question there's an element of jealousy in the fact that you wish that you'd had that. But there's really nothing that you can do about it. As a player, you just go and do your best, and I know when we went to the conference finals, we had a pretty good veteran team and some veteran defensemen that were really good, and it just, the timing of everything made it difficult.

GOLDSTEIN: Obviously, when you guys are on the ice, you're doing the best you can. But you're not robots. So I mean, did it penetrate the locker room?

DOAN: I think for a while, really galvanized it and the fact that, kind of, Dave Tippett did an amazing job of, kind of, of keeping us focused on the things that we can control and the things that we — and then once you start to have a little success doing that, it really solidifies your belief in that. And once you have that, then you're okay. It went on, obviously, for too long, and then it started to erode away everything that we had. But for about three or four years there, I think we were over 100 points. We finished third in the whole league in the one year, and it really kind of, the belief in ourselves really grew and that was exciting. But you see how fundamentals are very important, and the ability of, from top to bottom is so important. And if you don't have that, you can have success for brief stints but if you want to have really long term success, you have to have some stability throughout the whole organization.

GOLDSTEIN: And Shane, let's close by talking about this big honor you're going to get later this month. Coyotes are going to retire your jersey number, and there are going to be thousands of Coyotes fans worshipping you that night. And we talked about your humble beginnings in Canada. Have you thought about what that moment is going to be like? I presume you're looking forward to it. It's a great honor. But how are you going to feel? You thinking about that?

DOAN: That moment, I'm looking forward to it, but I can't wait for it to be over because it's just so awkward. But every athlete has an ego and everyone does, and it's something that you'll never ever forget and I'm excited about, but at the same time, it goes back to kind of what I said earlier where, as a hockey player, you have to recognize how many people have kind of sacrificed a lot for you to be pushed kinda out there. And that's, I think that I'm excited for the people around me that have, you know, get to experience that with me and I'm excited about that. And I'm so grateful for the fans here in the Valley. They've treated me so unbelievable. I, by no means, was a superstar, and at times, they've treated me like one and it's pretty special.

GOLDSTEIN: Shane Doan, known as "Captain Coyote" — The Arizona Coyotes will retire his jersey on February the 24th at a home game. Shane, thanks for coming in. Good to see you.

DOAN: Thank you so much, Steve. Really enjoyed it. Thank you.