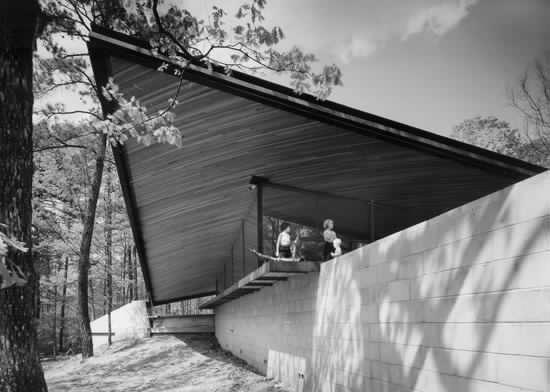 One of the most well-known architectural styles in Phoenix is mid-century modern. It's those 1950s and '60s-style houses with clean lines and breeze-block walls.

Another part of the U. S. where you can find this architectural style is North Carolina. It’s also where you’ll find management consultant George Smart.

Although Smart grew up the son of an architect he didn’t enter the field. However, when he was researching design ideas for a new home, it brought him into the fold in a way he couldn’t have imagined.

“I was on Google looking for modern houses in my area. Just casually because I was thinking about building one. And that lead to a discovery that I had actually toured some of these amazing houses when I was 6 or 7 years old with my dad," said Smart. "I’d completely forgotten about it. And so I was curious to find out how many there were in the area. That lead to a list which lead to a small website.”

That small website, NC Modernist, has also lead to the podcast US. Modernist Radio, which all grew out of a donation.

“A Charlotte realtor called me and said that he had a basement full of these great architecture magazines going back to the ‘20’s. Did I want them?" Smart said. "The catch was I had to have them out in two days. So I got somebody off of Craigslist to drive down there with a pickup truck and brought them back to the house and we decided we would start scanning them to put them online and that began the process which has evolved into our library of about 2.5 million pages of architecture magazines.”

The library he’s referring to is the USModernist Library, which has become an invaluable resource for many people.

“We get realtors who are trying to research houses they’re going to be putting on the market," said Smart. "We get buyers who are trying to find modernist houses to buy, and fix up and live in. We get a lot of students from around the world who use our site to learn about American modernist architecture.”

Along with those realtors, buyers and students, Cavin Costello, chief architect at the Ranch Mine in Phoenix, makes use of the archive for the unique perspective it provides.

“Well, we always like to look the past on how we can make proper changes for the future and by going through this archive we can really understand the insights through the journalists and architects of the time and the forces that shaped these places so we can get a better understanding of the design decisions that we make going forward," said Costello.

Stephen Thompson is also a Phoenix-based architect and a fan of the Modernist Architecture Archive. He feels it’s a project that was best undertaken by someone who isn’t an architect.

“I think the reason why an architect didn’t do it is because we either have no time and money or we have no money and a bunch of time. So, hats off to him because it is really quite an amazing site," said Thompson.

While George Smart didn’t follow in his father’s career footsteps, his work has garnered industry acclaim including the Institute Honors for Collaborative and Professional Achievement. The American Institute of Architecture’s highest award for non-architects.