What An Arizona Couple Wants People To Know About Living On The U.S.-Mexico Border 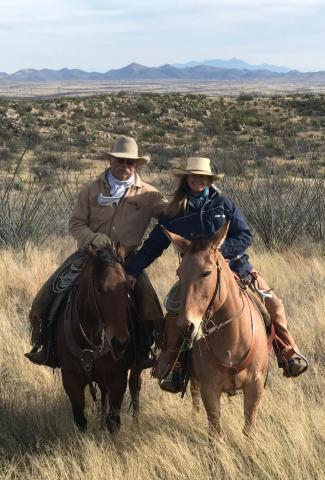 LAUREN GILGER: Lawmakers in D.C. are prepared to pass a border security compromise today. The deal includes almost $1.4 billion for new barriers on the border, as well as money for improved surveillance equipment and more humanitarian aid for detained migrants. But ultimately, this deal affects people living far away from Washington, right next to the southern border.

ROSS KNOX: I can't hit the fence with a rock, but I won’t miss it by much. I mean I'm looking at it from the front steps of my house. We can call her a quarter of a mile.

GILGER: That's Ross Knox speaking with me from Rancho de la Osa, a guest ranch in Sasabe, Arizona, where he lives and manages the property. Visitors stay out there for the mountain views and the horseback rides. I spoke with Ross and his wife, Lynne, about their lives right by the border with Mexico, where they say, contrary to much of the rhetoric surrounding the border right now, they feel very safe.

LYNNE KNOX: Mostly the people that we run across are people hiking across looking for work, but they're in a big hurry. We're actually too close to the border for them to cause us any kind of hassle whatsoever. They haven't run out of water or food and they're not tired yet. Of course because we are so close to the border where, you know, we have lots of Border Patrol here right in this area. As far as, you know, our experience here on the border, it works for us in so many ways because we've got four of our employees that come across every morning and go back every night, and they're fabulous workers and people, and we love having them as part of our team. So there are some really good things about living this close to the border also.

GILGER: So when you come across those migrants who have not run out of water yet like you said and who are just kind of on their way looking for work, what do you do? Do you talk to them, you see them in the distance kind of situation?

LYNNE KNOX: You know, they got their heads down and they're booking.

ROSS KNOX: We just go the other way. That’s not our job. That’s the Border Patrol’s job.

ROSS KNOX: It's very good. We get along great with them. I appreciate what they're doing. I mean, it's not an easy gig for them. So when I get a chance to stop and talk to them, I do. But as far as a working relationship goes with the ranch, it's as good as it could possibly be.

LYNNE KNOX: We have as good of a relationship with the Border Patrol as we do with our Mexican helpers that come across the border. It's just, it works here.

GILGER: So you're, you know, a stone's throw distance from the wall right there. And I wonder what you think of, I guess, all of this debate going on, about building a wall across the entire border, and what your opinion is with it right in your backyard.

LYNNE KNOX: You know, I sure understand the plight that the folks are, or anybody wanting to get into this country. We love our country. And I sure get that. My feeling is, I just want to know who's coming. I want them coming through the front door. Immigrants built this country. I think they're wonderful. Like I said, you know the people that work for us here that live in Sonora on the other side of the border are wonderful people and we trust them and we love them, they're part of our family. And so and I know that there's a whole lot of people in those groups that are probably just like those folks, but they're not all like that. I don't have a problem with the wall. I think there's a million ways to get this done. Some of them are probably better than others. I do appreciate the fact that the United States is trying to get them to come in through the front door. I think it's important.

ROSS KNOX: This border is way too open in way too many spots. Personally, I would like to the border secured.

ROSS KNOX: You know a wall, a fence. If there was another way, show it to me.

GILGER: What do you want folks in the rest of the country to know about the U.S.-Mexico border? About the place that you live and call home, and the people that you work with there?

LYNNE KNOX: I think what I would like to share with them is that it's a really long border. There's a lot of land on this border and because our experience is a good one here for the most part, I know that the experience for everyone that lives along that border is not positive. I think there's ways that we can fix the problem to help these people get a better life. I want everyone to have the life that we have. I mean that would be great. And if they want to come into the United States and have a better life for themselves, I sure get that and I'd love for them to have it. But I know that sometimes we just get overwhelmed at our borders. We've got to have a better immigration policy. The fact that it takes so long to get these folks processed and give them just a green card or whatever it takes to get them to come over and work, I think, that really needs to be addressed. That's one of the reasons that they're breaking the law to come across is because it takes so dang long and their families are hungry.

ROSS KNOX: And they try to do it legally. We get a chance to sit and talk to them and it's not easy. Those people, man I would love to see them come across and go to work. And I'd also like to know who's coming across. It's tough for them. Man, it’s tough. We talk to them all the time. And some of them have tried for years and some great people. You know, it's really aggravating to us also, you know, that it is that hard for them to come across legally. So it's a tough question to answer.

GILGER: Ross and Lynne Knox, thank you so much for coming on The Show.

ROSS KNOX: Yes ma'am, thank you. You have a great day.

GILGER: Ross and Lynne Knox manage the Rancho de la Osa, a guest ranch here in Arizona within view of the Mexico border.