NASA’s Opportunity Rover Shuts Down, But Arizona Legacy Lives On

After more than 1,000 attempts to restore contact, a 15-year journey across Mars has ended for NASA's Opportunity Rover. But the vehicle lives on in its achievements and its local legacy. 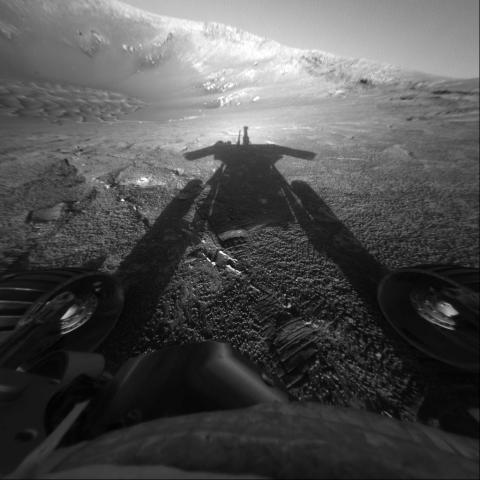 NASA/JPL-Caltech.
This dramatic snapshot of Opportunity's shadow was taken by its front hazard-avoidance camera on July 26, 2004, the day it doubled its mission lifespan.

There was a time in 2004 when the sun never set on Mars exploration, recalls Jim Bell of Arizona State University's School of Earth and Space Exploration; when a sleepless team of humans operated two rovers, Spirit and Opportunity, on opposite sides of the red planet.

Opportunity, the first rover to find direct evidence of water on Mars, outlived its twin by nine years — and its planned life expectancy 60 times over — before a planet-wide dust storm likely cut off power to its solar panels.

It's a bittersweet day.

"A lot of us will see each other again because we're working together on the Curiosity rover or the new Mars 2020 rover, and a lot of those people got all that experience on Spirit and Opportunity, [and are] super well trained in the fine art of operating a rover on another planet," said Bell.

Although its mission specs called for a mission length of 90 Martian days and 1,100 yards traveled, Opportunity lasted 15 years and traveled more than 28 miles, including a one-day record of 721 feet.

The data it provided will keep scientists busy for years to come.

"There are still people who are analyzing and arguing about Viking data from the 1970s," said Bell.