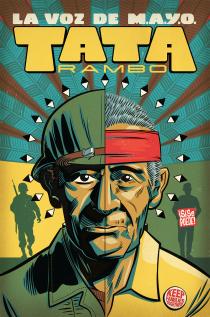 It worked with the Pascua Yaqui to help get federal tribe recognition for a specific purpose.

Jaurique’s great-grandson, Henry Barajas, is a former journalist in Tucson and was gifted his great-grandfather’s documents.

He found himself with old MAYO bilingual newsletters containing photos, poetry and stories of activism lost to history for 40 years. He decided to write a book about his great-grandfather, whom he’d always called "El Tata Rambo" — it was a nickname his family gave Jaurigue as a play on his war-veteran status.

But when he saw Congressman John Lewis' graphic novel of life during the civil rights movement, he decided to move away from just typed words on a white page.

The first chapter out now with the second and third chapters released in March and July. Unlike Marvel superheroes fighting villains, Barajas wants this comic book series to be more about documenting Latino and Arizona history — which he feels has its own superpower.