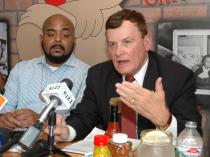 Critics wanted to know if he disclosed the fact that he was arrested on multiple charges including child pornography when he was living in Maryland in the 1980s.

Supreme Court spokesman Aaron Nash told Capitol Media Services that there's nothing unusual about the fact that no one can find Stringer's original application.

"The retention schedule for Bar applicant files is seven years after admission,'' he said.

Stringer was admitted to practice in January 2004, "which in this case would have called for destruction in January 2011.''

The State Bar of Arizona, which regulates the conduct of attorneys, opened an inquiry last week into whether the Prescott Republican had disclosed his criminal record when he moved to the state and applied to be admitted to the Bar.

Stringer says he has no criminal record — which is true. Although he was arrested and plead guilty to sex offenses — the plea deal said those  would be erased if he successfully completed probation.

But the application to practice law in Arizona specifically asks for any time a person has been questioned, arrested, taken into custody, indicted, charged with, tried for or pleaded guilty to any criminal violation. And it requires applications to disclose all incidents, "whether guilty or not, whether expunged or not, whether you believe or were advise that you need not disclose any such instance.''

Supreme Court spokesman Aaron Nash said while he cannot find Stringer's application or even a blank application form from 2003, "there is no record that the language on the requirements to disclose convictions, arrests, investigations and other matters, even when expunged, has changed between then and now.''

The lack of the written record does not mean the State Bar cannot question Stringer about his application. Attorneys have no Fifth Amendment right against self-incrimination in Bar inquiries, meaning they can be compelled to answer all questions or have their ability to practice law rescinded.

Stringer is also facing an investigation from the Arizona House of Representative Ethics Committee.

Rep. T.J. Shope, R-Coolidge, who chairs the Ethics Committee, said he is hiring outside legal help to investigate the complaints, interview potential witnesses and provide legal advice. But he also said that the inquiry may not be limited to Stringer's arrest record.

"The committee may wide the scope of the review if additional evidence is presented during the course of the investigation,'' he said, urging anyone with "relevant'' information to contact the panel.

Shope said he cannot provide a time line for the investigation.

The committee is also looking into comments the lawmaker made last summer to the Republican Men's Club in Prescott. Stringer said immigration represents "an existential treat to the United States,'' that America's "melting pot'' exists for "people of European descent,'' and that immigrants from south of the border don't assimilate because they maintain connections with their home countries.

Those comments resulted in calls by some, including Gov. Doug Ducey, for Stringer to resign. He did not and was reelected in November.

Within weeks, Stringer was back in the news for telling students at Arizona State Universities that assimilation doesn't work with African-Americans and other racial groups "because they don't melt in, they don't blend in, they always look different.''

He also said there is a "pretty significant burden'' on Arizona taxpayers for having to teach English to students who come to school without that being their first language and said that Hispanics vote Democratic because they want more immigration to bring "more of their co-religionists, their own people like them, into the country.''

Those comments cost him the chairmanship of a committee on criminal justice reform that incoming House Speaker Rusty Bowers had created at Stringer's request.