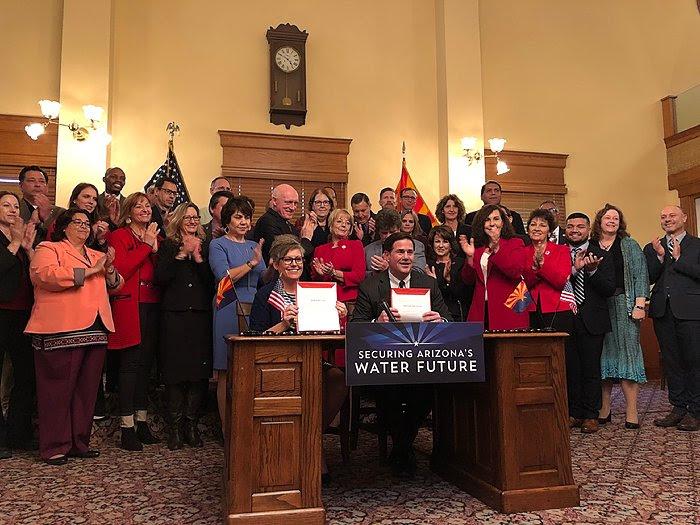 Arizona will join a drought plan for the Colorado River, supposedly meeting a federal deadline that threatened to blow up a compromise years in the making for the seven states that draw water from the constrained river.

The Arizona House and Senate overwhelmingly supported the legislation and Gov. Doug Ducey promptly signed it.

However, Bureau of Reclamation Commissioner Brenda Burman said despite the legislation that passed, she still considers Arizona not finished with the Drought Contingency Plan.

“Arizona took a very important step yesterday. I applaud their efforts,” she said on a press call. “There are still several agreements within the state - between tribes, between water districts, between the state - that will all need to be completed and signed.”

Additionally, certain water districts in California, like the Imperial Irrigation District, are still haggling with the federal government.

Because Arizona and some California agencies are not done, the federal Bureau of Reclamation posted a notice in the federal register on Friday asking the entire basin for input on what to do next. The BOR wants to have a plan for cutbacks in place before the end of summer.

Lake Mead, the lower basin’s main reservoir, is less than 40 percent full. Reclamation will likely declare the lake to be “in shortage” if it projects the level to be below 1,075 feet on Jan. 1, 2020. A so-called “Tier One” shortage triggers an 11 percent cutback in Arizona’s Colorado River supply. The DCP is meant to forestall further shortage tiers and deeper cuts.

Arizona lawmakers’ action on Thursday — and Gov. Doug Ducey’s signature — gives the Director of the Arizona Department of Water Resources, Tom Buschatzke, permission to sign onto a basin-wide DCP agreement. The DCP builds on a previous drought plan adopted in 2007.

Arizona is alone among the basin states in needing its Legislature to approve the DCP. The deal comes after a long public and private negotiation process that included a steering committee of almost 40 water stakeholders.

“There are hundreds and hundreds of people who have worked on these two bills before us,” said House Speaker Rusty Bowers, a Republican from Mesa. “We hope this first step will be beneficial to all of us.”

The state’s internal plan helps farmers in Pinal County who face the brunt of the water cut due to their lower priority for Colorado River water. They will receive river water for the next three years while they build infrastructure to transition their farms to groundwater. Several related agreements are still not done, but those don’t need Legislation.

The deal costs over $100 million from various public and private sources.

If the basin-wide DCP eventually falls into place, it lasts until only 2026. Water stakeholders will begin working on another plan to replace the 2007 agreement now in place.

“This bill not the end of the problem of drought in Arizona,” said Rep. Kirsten Engel, a Democrat from Tucson. “It is just the beginning.”

EDITOR'S NOTE: This story has been updated to add the Bureau of Reclamation's response to Arizona's plan.