Download mp3 (985.94 KB)
Casey Kuhn/KJZZ
A diamondback rattlesnake removed from a home in the Phoenix area. 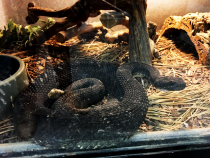 Casey Kuhn/KJZZ
A speckled rattlesnake in captivity.
Roger A. Repp
This photo shows Western Diamond-backed Rattlesnakes (Crotalus atrox) in one of Roger A. Repp and Gordon Schuett's research dens in southern Arizona.

It isn’t often a compliment when one is described as having “snake-like” tendencies. But research shows rattlesnakes actually have complex and individual personalities.

“One of the areas I’ve been frustrated with, is why wouldn’t you call them social, when they’re doing all these things together, including courtship, including male-to-male combat,” Schuett said.

He looked at rattlesnakes living north of Tucson and found they have social skills and personalities. Researchers collected data using radio transmitters attached to the snakes.

“And so just like humans or just like dogs, they do things differently, and everyone who owns a dog would never disagree with me,” Schuett said.

Diamondbacks can develop hunting style, or food preferences. And, there are dens where up to 20 rattlesnakes come and live together every winter — kind of like a snake apartment complex. He said adult male rattlesnakes were able to find and stay in the same den every year without fail.

Schuett said snakes have been misunderstood for years.

Those chemo sensations would be things like odor or chemical communication. Schuett plans to do more research on why snakes develop social skills.