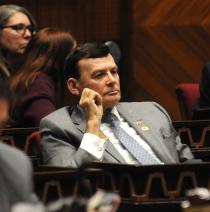 LAUREN GILGER: Yesterday, on the state House floor, Representative David Stringer, found himself center stage once again. The Prescott Republican first made headlines for racist comments that were caught on tape last fall and just a few days ago the Phoenix New Times uncovered court documents showing that Stringer was charged with multiple sex offenses in Maryland in the 1980s — including child pornography. That's what prompted Democratic state representative and Minority Co-Whip, Reginald Bolding, to introduce a motion yesterday to expel Stringer who has already been stripped of his committee assignments as punishment. Bolding's motion failed and Stringer's case is headed to the House Ethics Committee and Representative Bolding joins us now to talk more about this. Good morning.

GILGER: So, tell us your reasoning behind this. Why call for expulsion right now?

BOLDING: You know, the public has overwhelminglysaid that they believe that their elected officials should be held to a higher standard. As elected officials, we believe we should hold ourselves to a higher standard. And as was mentioned in the opening, you know you have Mr. Stringer who has made racially charged remarks. We heard about this story that just came out regarding him pleading guilty to sex crimes; some maybe even as serious as child pornography. We can't have that in a state of Arizona. That puts our whole state in a bad light.

GILGER: What are you hearing from the community right now, in terms of anger or outrage about his comments and about now these new revelations from the New Times?

BOLDING: The community is outraged. They believe that members of the state Legislature have to step up and show leadership. We have to hold each other accountable. And the only way to do that is to make sure that Rep. Stringer's behavior is not enabled by members who serve here but by letting him know that there are consequences to the actions that you take.

STEVE GOLDSTEIN: Rep. Bolding, regardless of what your Republican colleagues want to do on this as far as moving toward the ethics committee and having them decide, is this something that you are planning to bring up constantly until action is taken? Is it something that you want to continue to keep this in the front of people's minds? I guess I'm wondering about regardless of whether at this point it's falling on deaf ears to some extent when it comes to the majority.

BOLDING: You know, so there's a number of options. You know one option is to continue to introduce the motion to expel. The other option is to you know have this play out in ethics. Either option is an option that I think the public is calling for. They believe that they want to know everything about Rep. Stringer: his past actions and his current words and hear from the public on how that has affected them. But there's also people who have mentioned you know if at the end of ethics we're going to just get to an explusion, why waste taxpayer dollars and waste time at the Legislature? Let's just get this thing done now

GILGER: Rep. Kelly Townsend's argument yesterday on the floor was that Stringer's case should head to ethics first. That there is a process to these things and that should be followed so that everybody kind of has a due process in these kinds of investigations. Do you think that this is a waste of taxpayer money? Do you think that that process should be respected?

BOLDING: You know, I have no objections to the ethics complaint. You know, I have no objections to his case being moved to ethics. What we're talking about is public statements that he's already made. We're talking about crimes in which he pled guilty. So I mean we know what the outcome of the Ethics Committee would be, unless somehow he backtracks and says that he didn't say what we have on video and what we've seen so I mean if that's the route that the majority wants to go and they want to play this out for longer, that's fine with us. You know, I do believe that an ethics complaint and expulsion as long as we get to the place where we know that people who are making these comments, they are not representing our area as long as we can get to that place, I'm fine with that.

GILGER: All right. That's Democratic state representative and minority co-Whip Reginald Bolding. Thank you so much for joining us.

GOLDSTEIN: And Rep.  Bowling's expulsion motion did seem a little like deja vu for watchers of last year's legislative session. Just about a year ago, former Rep. Don Shooter of Yuma, was voted out by his colleagues over sexual harassment charges. So how similar is this situation or what's the appetite for another ouster from the State House? For that we're joined by Howie Fischer at Capitol Media Services. Howie, good morning.

HOWIE FISCHER: Good morning. As you point out, the Shooter investigation and the ouster did leave some bad taste in some folks mouths while he was voted out essentially with just two votes in his favor - his own and his colleague, Noel Campbell. I think there was a belief that somehow the process had been short circuited and he really didn't get a chance to to have the thing investigated the proper way. So before they go down this path again, I think they'd like to let this play out and that's why the Ethics Committee.

GOLDSTEIN: How big a difference does it make that we have a leadership change? Many people perhaps not all, praised former House Speaker J.D. Mesnard for at least stepping into this and trying to take decisive action. Do you see a more cautious leadership right now?

FISCHER: Well, I think that everyone is a little more cautious. I think the question is, look everyone knew. You know the comments that Mr. Shooter made, the things he had done, there had been an investigation. But that investigation was done not through the Ethics Committee which is the procedure, but was done by a committee formed by then-Speaker J.D. Mesnard and the investigator came in and looked and interviewed witnesses. But there's a feeling that if this is to be a trial and certainly not a criminal case, you have the opportunity to confront the witnesses against you. That didn't happen in the Shooter case and in the ethics committee, if in fact they go to a full blown hearing, there will be an opportunity to examine witnesses, to question them, and to ask for an explanation. In the case of the arrest that clearly are part of the court record in Maryland, Mr. [Stringer] offered an alternate explanation saying, look I didn't believe I was guilty but the chances of the jury maybe not believing me, it was easier for me to take a plea deal. And it's not an unusual plea deal, they happened here in Arizona all the time. If you basically keep your nose clean for the period of probation which was five years in Maryland, we will expunge the record, you have no record. The public deserves to hear that. Now you know I appreciate Mr. Bolding's belief that no matter what, the outcome will be the same at the end and then very well may be. But if you follow the procedure, then you don't have the, you know, the sort of 2020 morning after hindsight.

GILGER: Howie, I want to ask you about the political implications of this, not particularly on representative Stringer but on the state House and legislature as a whole. I mean this is not obviously the first time we've been through this and it seems like it's starting to become routine. Is this just really hurting the public's trust in this body?

FISCHER: Well I think that's part of the reason that Kelly Townsend put in her request for an ethics committee saying, look this is reflecting on the Legislature as a whole, that if in fact he was guilty of child pornography even if it was from 1983, does that reflect on the Legislature as a whole. And of course this information didn't come out until after Mr. Stringer was re-elected. There is a lot of concern about the fact that people hold lawmakers you know way down there with a lot of other folks you know some of them who don't like journalists either. And I think there's a belief that we need to protect the integrity of the legislature. Now that said, Mr. Stringer isn't the only one who occasionally you know makes stupid comments. The recent controversy over Tom Brokaw making very similar comments about Hispanics not assimilating suggests that this isn't just a question of a few people. There are folks who have been in the news, who have national attention, who apparently share the same feelings.

GOLDSTEIN: Howie, finally let's just get down to brass tacks as far as politics go. We know that politicians ultimately are about themselves and about keeping themselves in office to whatever extent. But how tempting is that regardless whether they'd say this publicly, how tempting is it for fellow GOP members knowing that Stringer comes from a conservative district that wouldn't it be nice to just get him out of the headlines and get a reliable Republican vote in there?

FISCHER: Oh, I think that's part of what the issue is of course he would say that it's because he supports criminal justice reform and a lot of Republicans don't. Yeah, it's easy to put things behind you. I think that's part of what happened. Look going back to the Mecham impeachment. There were a lot of folks who said, the guy is an embarrassment; let's put it behind us and then Arizona can move on. I think there's a lot of sentiment among the Republicans to do that. But there's also a lot of sentiment given what happened a year ago with Don Shooter to say, we're not going to be accused of rushing this and we're going to allow it to play out even if it is embarrassing for the short term.