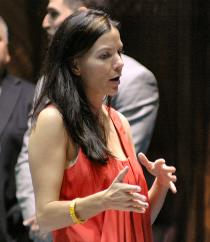 Arizona Senate Bill 1046 has been successfully voted out of committee by the Senate.

The bill, which passed on party lines, said those who receive ballots by mail may only return them by mail and not drop them off at polling places.

Its sponsor, Sen. Michelle Ugenti-Rita (R-Scottsdale), said the bill is an effort to speed up vote counting.

“What I want to do is to get back to the original intent of vote by mail. This is an elected convenience. You opt into it. You do not have to vote by mail,” she said.

Nearly a quarter million Arizonans dropped off their mail-in ballots at polling places during the election, many waiting until Election Day.