After years of closed-door negotiations and a month-long public relations blitz, the Phoenix City Council has approved an arena renovation deal with the Suns.

Councilwoman Vania Guevara, who came out against the deal last month, voted yes after the Suns committed at least $10 million in community benefits this year, including about $2.5 million to offset cuts to the city’s Head Start preschool program.

“As public officials, as people, we shouldn’t be afraid to change our mind or admit that initially we may have gotten it wrong,” Guevara said. 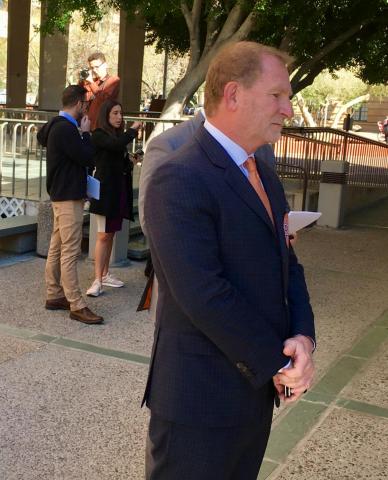 Councilman Michael Nowakowski, whose district includes the Talking Stick Resort arena, asked for one word to be changed in the contract. Basically, there was a line that read the city "may" hire their own representative to monitor their expenses. Nowakowski got the word "may" changed to "will".

“I think it’s so important that if we’re going to pass this that we’re going to have somebody that’s on our payroll making sure our monies are being spent the way they should be spent and everything’s on the up and up,” he said.

By a 6-2 vote, the council approved spending $150 million on initial infrastructure improvements on the city-owned facility with the Suns paying an estimated $80 million plus overruns. The initial total estimate was $230 million but the latest estimate was $235 million. Vice Mayor Jim Waring and Councilman Sal DiCiccio voted against the deal.

Supporters say the money will come from an existing tax on hotel rooms and rental cars that was created to build the arena while critics say the Suns should cover more costs and Phoenix should use the tax on needed city services and programs.

“We are the oldest, smallest arena and we need to get rolling,” he said. “And I’ve been putting off my partners and the commissioner as long as I can. And we need to get ourselves up to standard. Not only is it the Phoenix Suns but we’re just one-thirtieth member of the NBA, and the NBA has standards and we gotta get back to those standards and we’ll get an All-Star game here and, you know, we’ll be proud of it.”

Work is scheduled to take place over the next three summers. The renovation agreement is expected to keep the team downtown through 2037. If the Suns leave early, the team could pay the city up to $200 million.