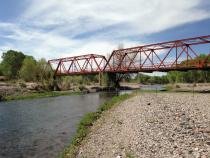 A battle is brewing over valuable water rights that could blow up Arizona's Drought Contingency Plan.

Legislative House Speaker Rusty Bowers has proposed overturning a state law requiring farmers upstream from the Gila River to use their water share every five years or lose it.

He plans to argue that the long standing law does not consider years when flooding destroys crops and fields leaving farmers struggling to use their allotted water.

The Gila River Community has engaged in a series of legal battles with farmers over the years, Bowers claimed.

“They are destroying people who don't have a $20 million retainer,” he said. “They don't have the assets to do the fight.”

In some cases, he said farmers have been in as many as six lawsuits over the water rights, “and it's just killing them."

But, the Gila River Indian Community’s Attorney Don Pongrance said Bowers bill essentially allows the farmers to “steal” the water from the tribe and it undermines a more than century old water rights act.

"It essentially says to us, 'no, you're really not part of Arizona because those of us who control what happens in Arizona get to make the rules and change the rules on you so you lose your water rights," Pongrance said

Pongrance warned Bowers’ bill will force the Gila River Indian Community to reject the drought contingency plan, which the Bureau of Reclamation has given the state until the end of the month to approve or face coming up with an alternate plan.