Carol Gibson first saw a saguaro cactus when she was 7 years old and her family moved to Arizona from Tennessee.

“I have always wondered what causes saguaros arms to turn up or down and get into such crazy shapes? I've heard it's for balance.”

She asked about the sometimes whimsical desert dwellers through our reporting project Q&AZ.

“These look like just green thumbs popping up out of the soil with, you know, lots of spines,” said ASU evolutionary biologist Martin Wojciechowski.

He grew these cacti from seed and says they first emerge from pinhead-size black seeds as “diamond-shaped green blobs.” 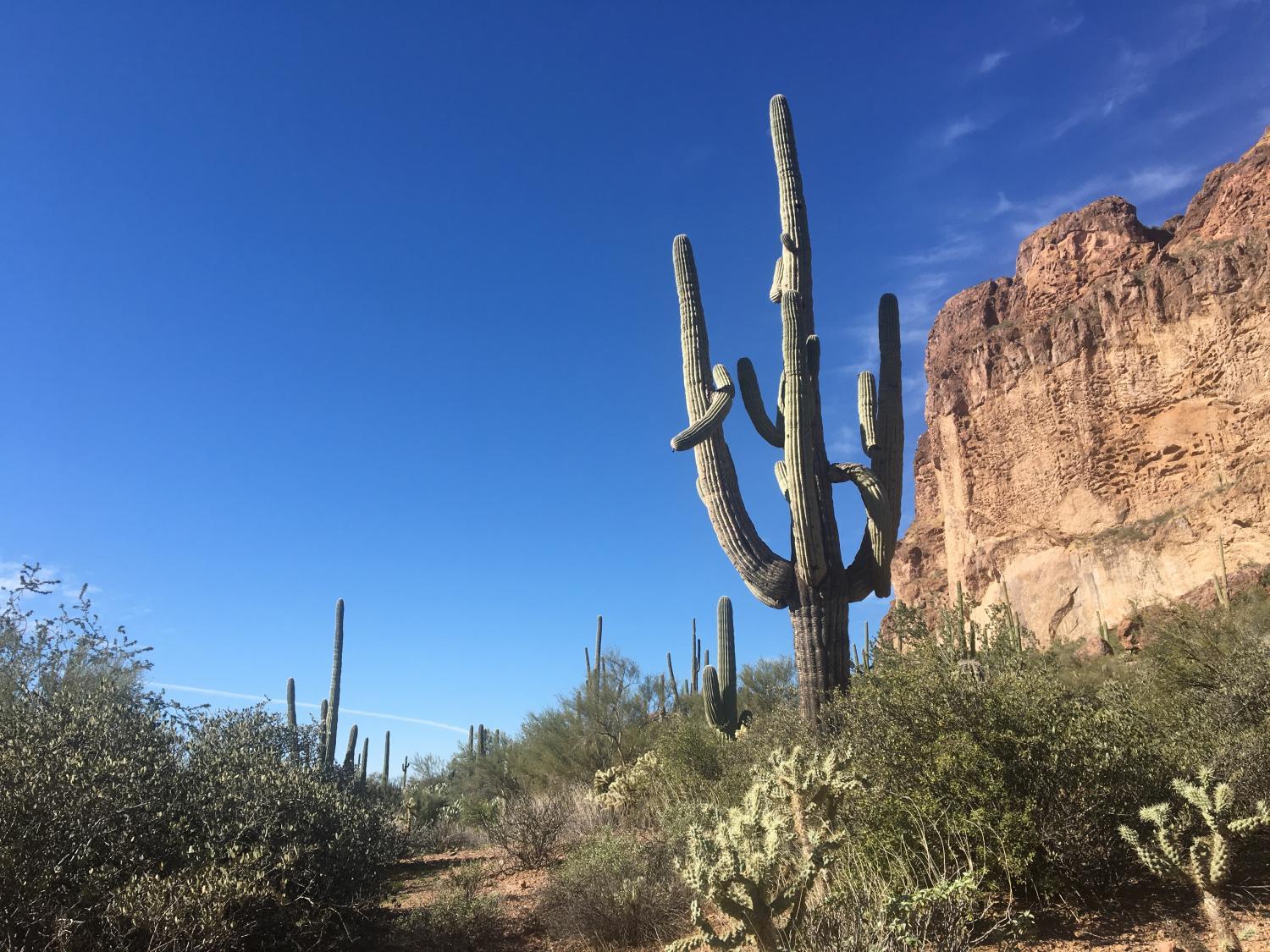 Mariana Dale/KJZZ
One theory is that frost causes the sauguaro cacti's arms to droop down.

These saguaro are special because they’re descended from the first fully genetically sequenced saguaro. Specifically, SGP-5 F1, which stands for Saguaro Genome Project, cactus No. 5, the first filial generation. Until it fell in a monsoon storm, cactus 5 grew on Tucson’s Tumamoc Hill.

Wojciechowski and his colleagues hope to unlock the saguaros' secrets. They only grow in the Sonoran Desert. That includes Northern Mexico, Arizona and a little bit of California where it’s warm and dry.

“We would like to understand how and when those adaptations to life in a hot arid environment evolved,”  Wojciechowski said.

Those genes might also hold clues as to why the saguaro grows into such a distinctive shape. But there are a few things scientists already know.

Gravity shapes all plants, including saguaros

Saguaros grow from the tips of their stems and their roots, which are relatively shallow and spread out. 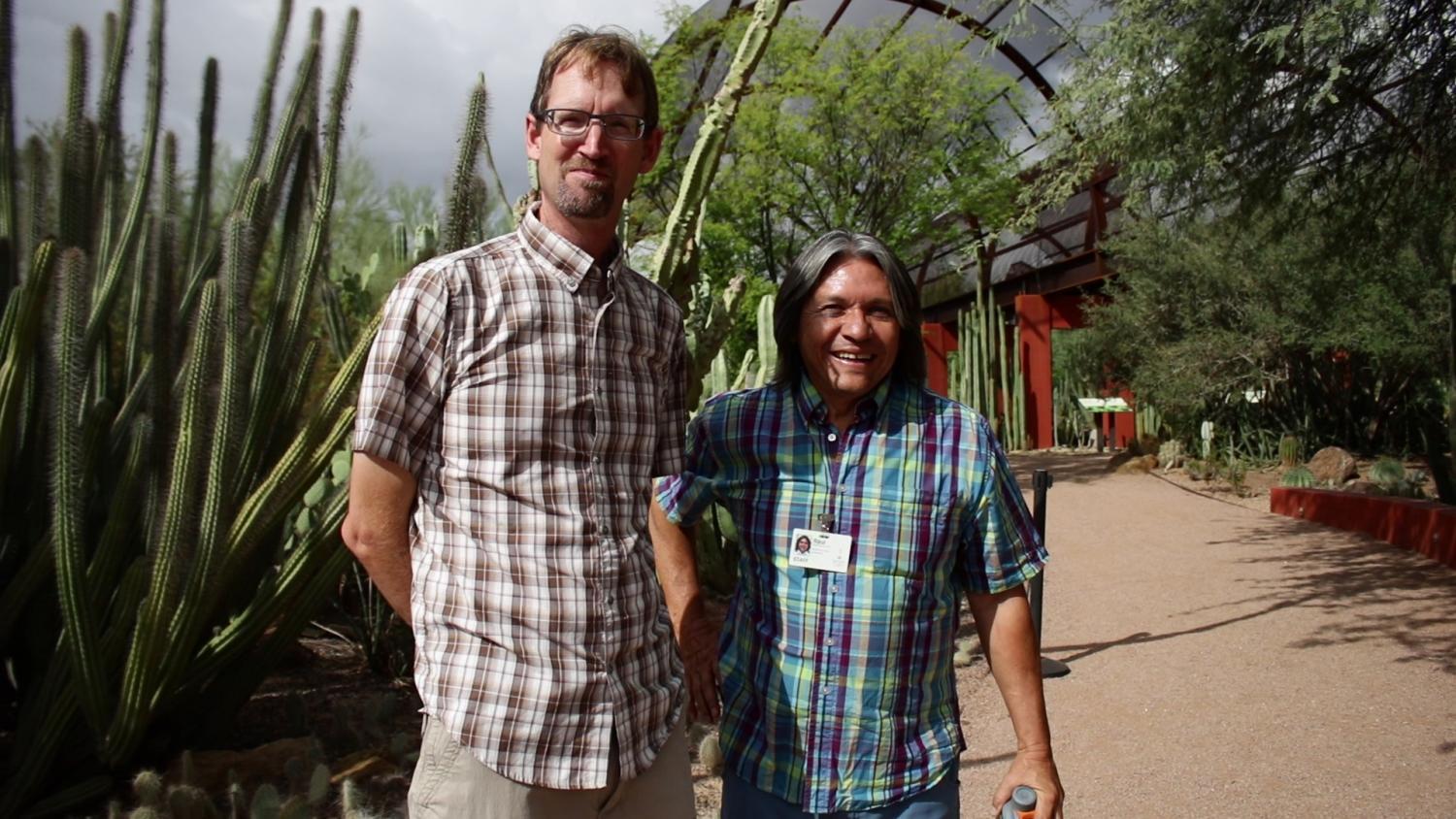 “If you have a great big stem, lots of storage, but you grow really slow, the likelihood is that you can persist for a long time,” said Kevin Hultine, a a plant physiologist at the Desert Botanical Garden. More than 1,000 saguaro cacti grow here.

Saguaros are estimated to live to 200 years or older. One key for survival in the desert is how much water they can hold.

Saguaro cacti grow their first arm when they’re about three meters tall. Hultine said contrary to popular belief it’s not a specific age. How fast the saguaro grows is tied to where it’s growing and how much water is available.

He points to a saguaro arm above both our heads that’s several feet long.

“I would say that right now it’s probably storing 30 to 40 gallons of water just in that arm,” Hultine said and estimates the weight at 250 pounds.

So the more arms a saguaro has, the more water it can store.

But that’s not the only reason for the arms.

“When you think about the goal of producing all these arms is to produce more flowers, so you have more sites that can be visited by potential pollinators,” Hultine said.

Saguaros’ height helps them stand out to hungry bats, bees and birds that will pollinate their flowers.

“Think about if you held your own arms out and you had weights at the end of your wrists,” Hultine said. “It would get pretty heavy, right?”

That’s why the arms curve upward — more like a letter Y than a T.

Hultine said the biomechanics of the shape make it easier to support the weight.

Not every saguaro looks like the cactus emoji. Why? 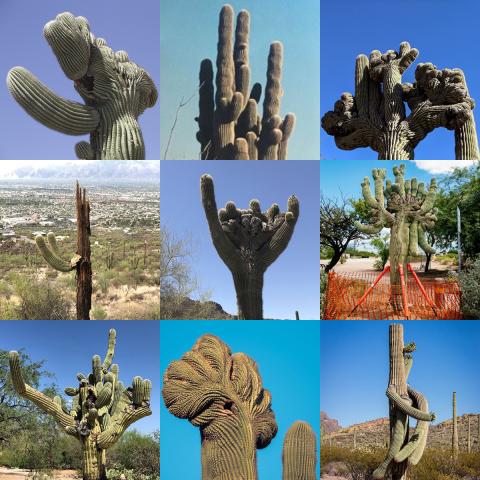 He has studied cacti for decades; the prickly pear was the subject of his college thesis.

One explanation is that a hard frost can damage a saguaro’s skeleton. The usually strong fibers, called ribs, are weakened and can’t hold the weight of the arm so they droop.

The cacti can be difficult to study because they grow so, so slowly, often just a few inches a year.

“We tend to think in nature that everything has an evolutionary purpose, but there is some random events that happen that may not necessarily increase the fitness of the plant, but if it’s nonlethal, plants will persist,” Hultine said.

For example, some saguaro cacti go their entire lives without growing a single arm.

“Within a unique species, there are unique individuals that you come across all the time,” Hultine said.

The crested saguaro is an example of a persisting oddity. These cacti have fan-like growths.

“That growth, vertical growth is interrupted,” Puente-Martinez said. The cells divide horizontally instead.

Side note: The botanical garden was once home to a crested saguaro stolen near Quartzite and rescued from a Las Vegas nursery where it had a $15,000 price tag.

No one knows exactly why the crested variation happens.

Want to learn even more about saguaros? Sign up for the Q&AZ newsletter. 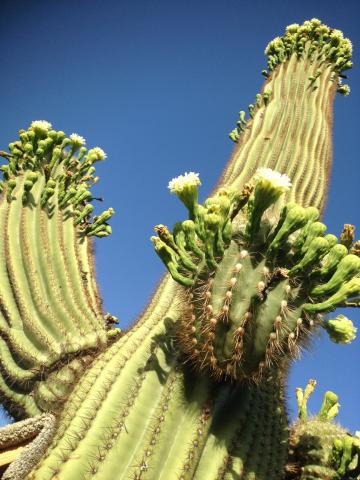 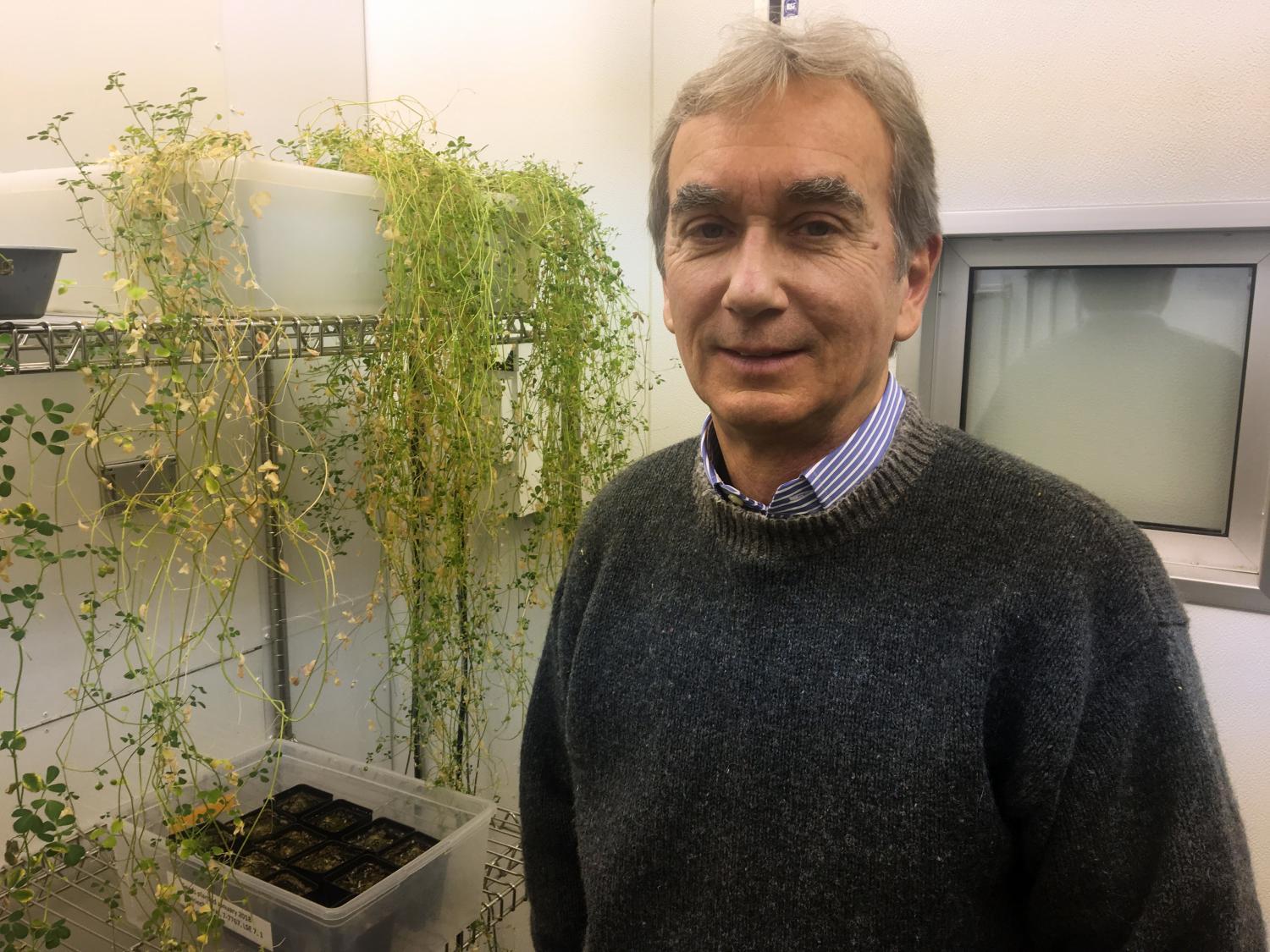 Mariana Dale/KJZZ
Martin Wojciechowski is an ASU evolutionary biologist who focuses on plants. 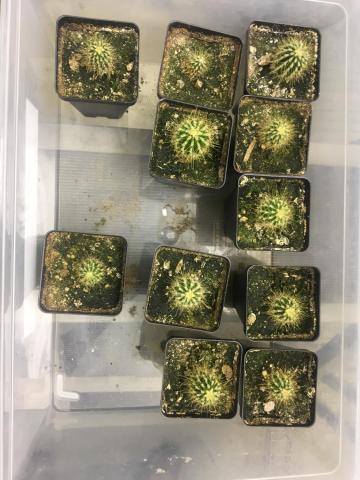 Mariana Dale/KJZZ
These cacti are descendents of the first genetically sequenced saguaro cactus. They're about two years old. 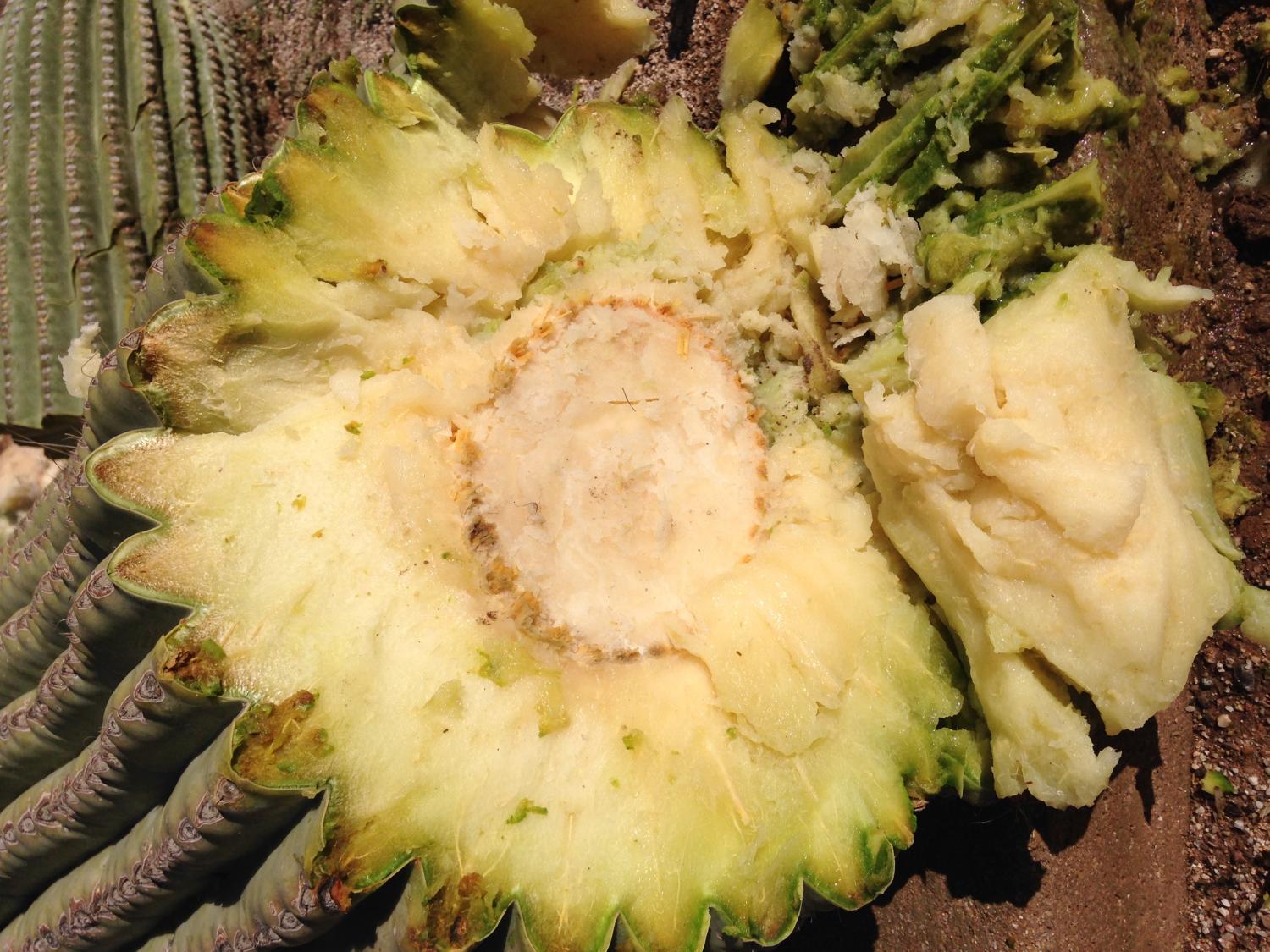 Mariana Dale/KJZZ
This cactus fell and smashed to pieces after a storm. The cross-section shows how strong woody fibers, sometimes ribs, give the saguaro structure. 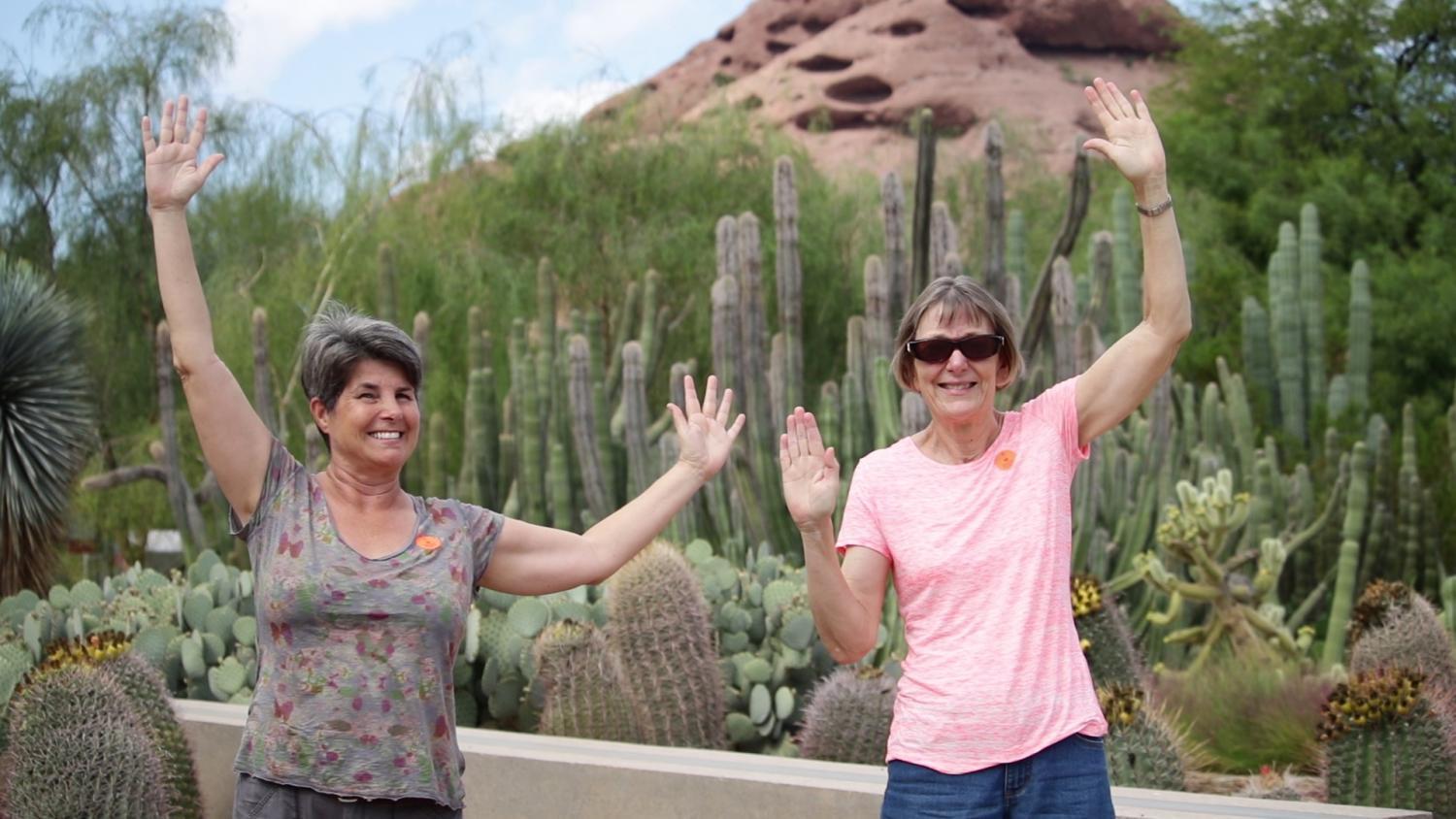 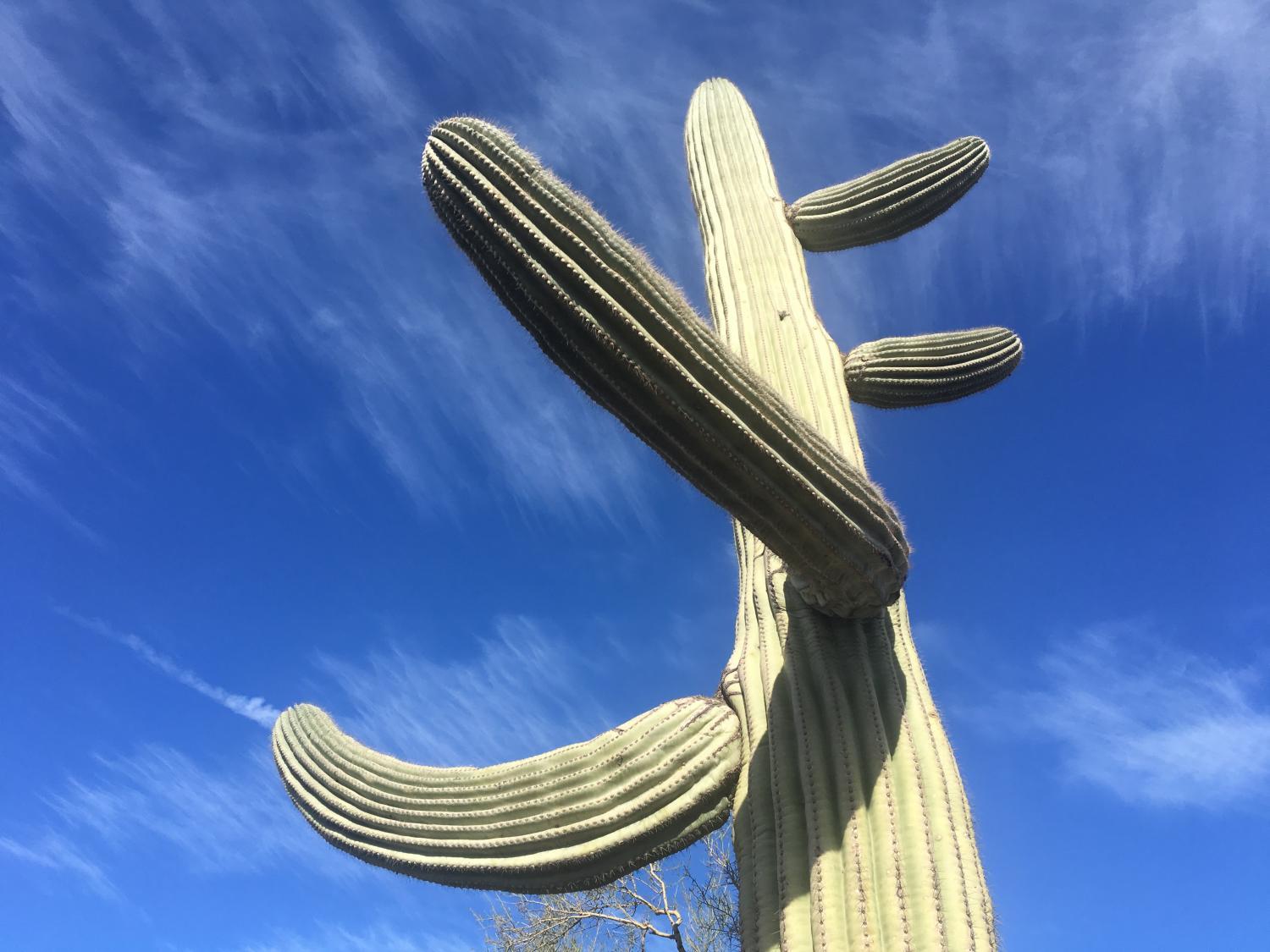