Brendan Mahoney was one of the lawyers in town who people would call when they were fired from a job or refused a room because they were gay.

“It really happened all the time,” Mahoney said.

Mahoney, who was openly gay, would explain the reality of the law in Arizona.

“There are no federal protections, no state or city protections,” Mahoney said. “Your best solution is to get involved and change the law.”

Mahoney eventually took his own advice.

He went to work for the city and advocated for a Phoenix law prohibiting discrimination on the basis of sexual orientation. The ordinance would apply to housing, employment and other public accommodations — just as the law already did for categories like race, sex, marital status and religion. 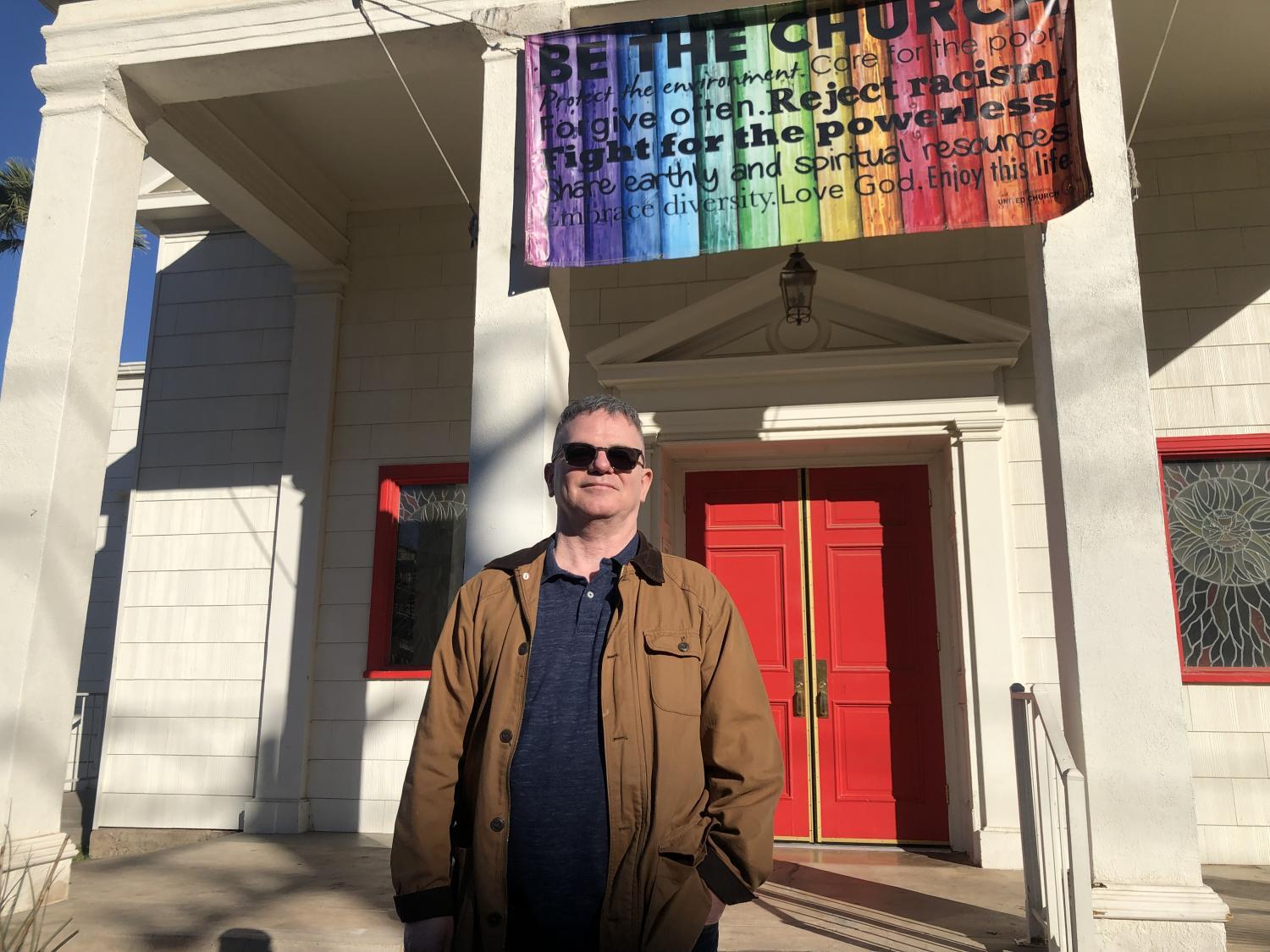 Will Stone/KJZZ
Brendan Mahoney is one of the architects of a Phoenix law that prohibits discrimination based on sexual orientation.

“I thought that things had changed, that there was broad support in the community for this and that our politicians were just behind,” Mahoney said. “They were afraid of the attacks that would inevitably come from the conservatives.”

Opposition was fierce and on full display during the 2013 public hearing leading up to the Phoenix City Council’s 5-3 vote.

Those against the proposal, which also applied to gender identity or expression and disability, called it “government overreach” and an “attack on the innocence of our society.”

“Now you are going to discriminate against that person because they have religious convictions,” one Phoenix resident told council members.

Others directly cited religion when voicing their concern about the measure.

“He sends you to punish evil doers and praise those who do good — not to switch that around,” another man said.

But the measure did ultimately prevail.

More than five years later, Mahoney said the law has made a huge difference in the lives of LGBTQ people.

"I think the impact was profound," he said.

“We have had no uproar about, ‘Oh my god, you are ruining our business, we’re going to have to lay people off,' and the parade of horribles that gets tossed out.”

But one Phoenix business argues it cannot in good conscience follow that law.

The calligraphy shop’s owners say making an invitation for a same-sex wedding would violate their Christian belief that marriage is only between a man and a woman.

Will Stone/KJZZ
Jonathan Scruggs is an attorney with the Scottsdale-based Alliance Defending Freedom, a Christian law firm that is representing Brush & Nib Studio. Scruggs speaks in Phoenix on Jan. 22, 2019.

“The government shouldn’t be telling artists what they can and can’t say,” Breanna Koski, one of the co-owners of Brush & Nib, said. “We’re challenging this law not just for us, but for all artists to be able to create freely.”

Koski and co-owner Joanna Duka argue the law violates their freedom of speech and religion.

They are asking the Arizona Supreme Court to deem it unenforceable against them. Those who break the city’s nondiscrimination rule could face thousands of dollars in penalties and possible jail time.

Last year, the Arizona Court of Appeals ruled against the duo, which is represented by the Scottsdale-based Alliance Defending Freedom.

The influential Christian law firm has become well-known for challenging nondiscrimination protections, most notably by representing a Colorado baker at the United States Supreme Court. The baker, Jack Phillips, had refused to make a cake for a same-sex wedding because of his religious beliefs.

The court ultimately ruled in favor of the baker, but left the central question of the case — how to balance free speech with protections against discrimination — unresolved.

The issue is expected to end up back in the high court, and a handful of lawsuits related to providing services for same-sex weddings are moving through the country's courts in hopes of forcing the question.

“The main question is do you get to object to that kind of anti-discrimination law because it’s forcing you to convey a message?” said Ilya Shapiro with the Cato Institute, a conservative think tank that filed a brief supporting the business.

Shapiro argues Brush & Nib’s owners should have that right.

“I personally don’t think it matters that their objection is based on their Christian faith. So, in theory then, could you force a Democratic public relations person to write a press release for a Donald Trump rally or something like that?”

“The rules should go the same way for other people,” ADF attorney Jonathan Scruggs told KJZZ in November.

“We’re challenging this law not just for us, but for all artists to be able to create freely.”
— Breanna Koski, Brush & Nib co-owner

“The government should not be forcing an LGBT web designer to create a website criticizing same sex marriage for a church, or to force a Muslim printer to design and create pamphlets promoting a synagogue’s religious service.”

But attorneys for Phoenix argue the law doesn’t force the business to design messages proclaiming support for gay marriage, only to make the “standard wedding invitations that are otherwise identical to what they would make for a straight couple.”

“It’s not an answer to one type of discrimination to say, well, let’s have more discrimination,” said Jennifer Pizer, Law and Policy Director for Lambda Legal.

“The point is, people operating businesses should be serving all customers without discrimination.”

Pizer’s group has joined other civil rights organizations in supporting the city’s position that there’s no principled way to differentiate discrimination based on sexual orientation from other classes like sex, race or even religion.

Pizer warns that once you start doing that “civil rights laws could become meaningless if constitutional rights are understood that way.” 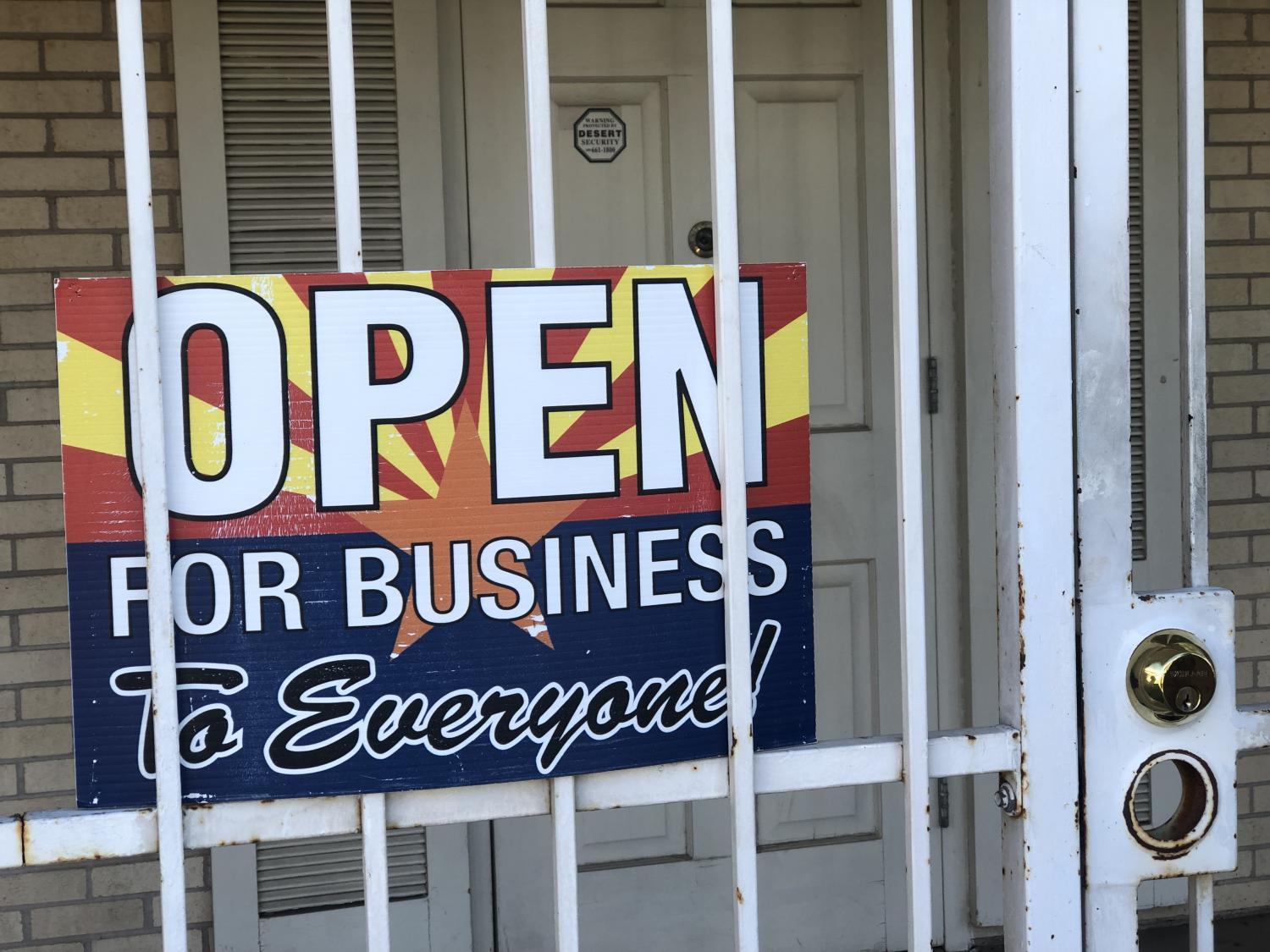 Will Stone/KJZZ
A business has challenged the law that prohibits discrimination due to sexual orientation, arguing it violates their freedom of speech and religion. The Arizona Supreme Court is hearing the case on Tuesday.

The case has divided powerful forces in Arizona.

The Arizona Attorney General and Republican leadership have filed briefs in support of Brush & Nib. Major employers and sport teams have sided with Phoenix.

“If their compelled speech theory prevails, any business that engages in similarly expressive activities — photographers, artists, graphic designers — would be able to refuse services if providing those would effectively require them to state a message with which they disagree,” said Kaipo Mastumura who teaches at Arizona State University’s Sandra Day O’Connor College of Law.

He speculates the Arizona Supreme Court may try to rule narrowly on what counts as free speech.

“My guess is that the court would try as hard as possible to restrict the ruling."

But Mastumura points out the lawsuit also challenges the Phoenix nondiscrimination rule on the grounds of religious freedom, which is related to another Arizona law.

“That’s based on this rationale that any time I am asked to perform a service that makes me complicit in a same sex wedding, my religious rights are being violated.”

He said that could make the ruling about many other services, ones that don’t necessarily intersect with free speech or “expressive conduct.”

One weakness in the case? Matsumura points out no one actually asked the shop owners to make an invitation for a same sex wedding.

“We don’t really know exactly what they would or would not do,” he said. “It’s unclear the extent to which Brush & Nib would actually be compelled under the law to express a particular message about same sex marriage.”