An Arizona Department of Corrections (ADC) press release dated Jan. 18 says Centurion Of Arizona will take over the contract to provide health care at the state prisons July 1.

ADC says it reviewed five bid proposals "and concluded Centurion’s offer to be the most competitive and in the state’s best interest."

The new contact is for $204 million annually for two years with three one-year renewal options. ADC will pay Centurion $16.604 per inmate per day for prison health care services at 10 state-run prisons.

This comes as attorneys for the state and incarcerated patients filed a joint plan on Friday for a new, federally appointed independent monitor to oversee the entire prison health care system as Corizon Health was accused of cheating the state monitoring system.

But that increase came after ADC blamed Corizon Health in March 2018 for failing to comply with a settlement agreement that has cost the state millions and millions of dollars. 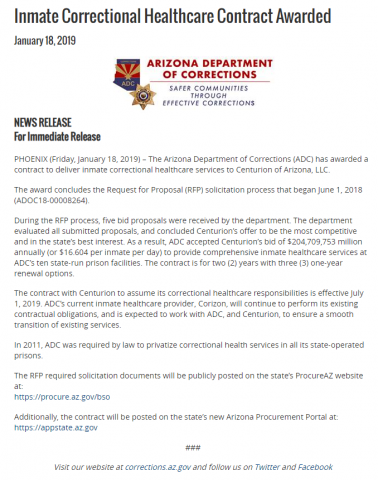