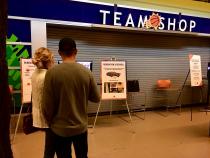 There are more financial details surrounding the proposed arena deal between the city of Phoenix and the Phoenix Suns. It’s the first time the city has publicly shared a breakdown of what it will cost to renovate Talking Stick Resort Arena.

The information comes after the city held five public meetings  to gather input and less than a week before the council is set to vote on the city-owned arena.

Originally pitched as a $230 million renovation, the preliminary cost estimate is now $234.9 million. The biggest chunk — nearly $100 million — would cover new mechanical, electrical, plumbing and communication systems. More than $26 million would cover repairs and replacement of furniture, fixtures, artwork and food service equipment and more than $11 million would go toward new and repaired elevators and escalators.

The city has said Phoenix’s initial $150 million share would be covered through an existing tax on hotel rooms and rental cars while the Suns would spend $80 million on suite upgrades and fan amenities. The deal also includes Phoenix contributing up to $25 million over 12.5 years and the Suns contributing up to $12.5 million for future renovations. The team would also build a new practice facility estimated to cost between $25 million and $50 million in Phoenix.

Here’s a breakdown of the arena preliminary cost estimates:

After a public backlash last month, the city council postponed its vote on the renovation deal and directed staff to post financial and historical documents online and arrange five public meetings to gather input.

According to a city council report, approximately 300 people attended the meetings and provided 102 comments, most in favor. The council is scheduled to vote on the proposal on Jan. 23.