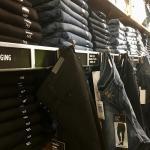 The National Retail Federation found 75 percent of shoppers expect free shipping even on orders less than $50. That’s up seven percent from a year ago.

Katherine Cullen oversaw the research and said some consumers who want free shipping are willing to meet retailers halfway — by ordering online and picking up at the store.

“Right now going and picking something up from the register is the most common way of getting your item,” she said. “But we are seeing some retailers offer curbside pickup or they’ll even bring things out to the trunk of your car, and customers are really interested in those options.”

The survey found 83 percent of people who bought online and picked up at store did so at the cash register compared to 27 percent who used curbside pickup and 19 percent who had merchandise delivered to their trunk. But the poll found more than half of those surveyed would be willing to try curbside and trunk pickup.

“There really isn’t, you know, a digital-physical divide anymore,” Cullen said. “Those two channels are really coming together, and it’s being driven by retailer strategy but also by how people want to shop.”

Retailers like the buy online, pickup at store method because consumers will often browse or buy other items. Some retailers have also started offering free shipping for customers willing to wait longer to get their items.

According to the National Retail Federation, the poll has a margin of error of two percentage points.