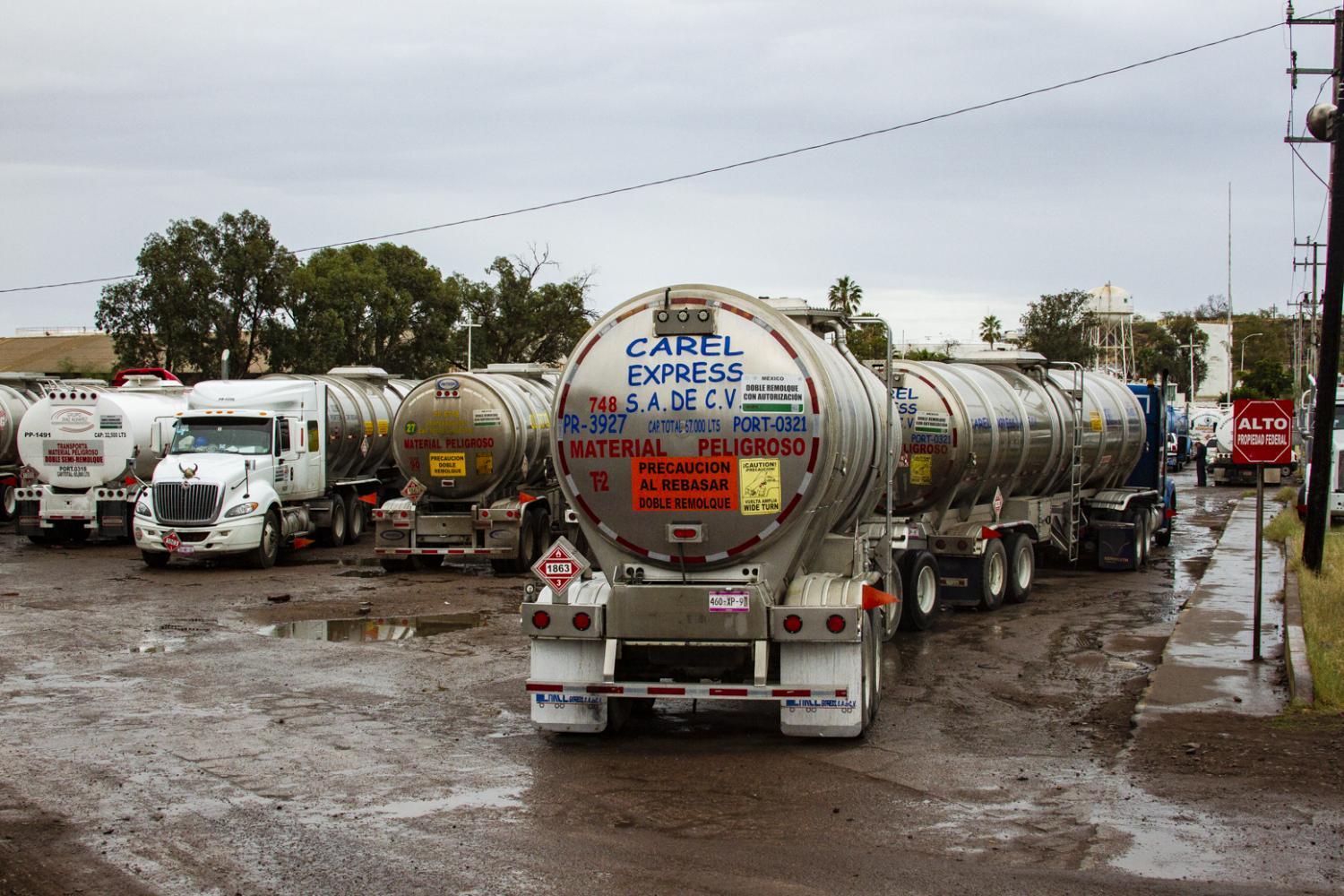 Murphy Woodhouse/KJZZ
Fuel trucks line up at the Pemex fuel terminal in Sonoran port city of Guaymas in January 2019.

Many states in Mexico, including its capital, have experienced severe fuel shortages for days. The Mexican administration says it’s the result of closing gas pipelines temporarily to stop illegal fuel taps. But many are skeptical of the strategy, and resentful of the results.

Drivers across central Mexico are struggling to find gas, as hundreds of gas stations are closed. In Mexico City, there’s a three-block line of cars waiting at one of the few gas stations open in Mexico City.

Some of the drivers have been in line or trying to find fuel for hours, like Alfredo Rojas. And he’s not happy at all.

“This is terrible. And it also paralyzes the economy, right?” Rojas said.

The shutdown has affected businesses like Rojas’ restaurant, where they struggle to pick up supplies. Even private ambulances have to deal with the situation, putting at risk not only their businesses, but also the lives of many patients.

“Of course, it’s wrong that some people steal fuel, but the government should supervise the pipelines instead of shutting them down, affecting us all,” Rojas said.

But for recently inaugurated President Andrés Manuel López Obrador, his strategy is the only possible thing to do against the fuel thieving mafia, known as “huachicoleros”, despite many doubts about the effectiveness of the idea.

“There’s enough gas in the country,” López Obrador said in a press conference, facing the anger of many drivers that haven’t found sufficient fuel in gas stations across the country. López Obrador said the current problem comes from the temporary measure of distributing fuel by trucks instead of pipelines. His government claims to have detected corrupt officials and gas stations, while blocking related bank accounts.

“We will not yield to any kind of pressure, and we need citizens to help us,” López Obrador said. His government is asking citizens to decrease their fuel consumption and blames gas shortages on “panic shopping.”

And while supporters applaud the measure in the hopes of stopping fuel theft, others — many of them analysts and experts — question the strategy and its still unclear results.

“My take is that the war against fuel theft is kind of a screen to actually hide the incompetence of the current government,” said Miriam Grunstein, an energy expert at the Mexico Institute at Rice University.

She said the government has been unable to supply enough fuel since December, when the demand quadrupled as a result of the holiday season. The industry expert explained refineries are not working at their full capacity, and can’t produce enough gas to satisfy the domestic market. There’s also not enough infrastructure to distribute gasoline.

“I mean, López Obrador has committed many mistakes too early in his administration — and this is a big one,” Grunstein said.

Grunstein thinks “huachicoleo” or fuel theft is a real problem and a complex one, considering that even drug cartels control a big part of it. And for many people, “huachicoleo” is justified as a reaction to the high prices of gasoline.

"My take is that the war against fuel theft is kind of a screen to actually hide the incompetence of the current government."
— Miriam Grunstein, Mexico Institute at Rice University

But Grunstein said the government has no real strategy to fight fuel theft and no reason to do it now. And she fears the medium- and long-term effects of the crisis.

“Certainly having pipelines shut down at the will of the president will scare the hell out of investment,” Grunstein said.

And since almost 80 percent of gas used in Mexico comes from the United States, Grunstein also expects that Mexico will have to pay huge fines as a result of having fuel waiting.

“It affects Mexico because, of course, there’s huge penalizations as a result of having these boats at wait,” Grunstein said.

At a gas terminal in the Sonoran port city of Guaymas, dozens of fuel trucks are idling at the entrance. They’re waiting to fill up on gas brought in by tanker up the Sea of Cortez.

The air is thick with diesel fumes. Drivers check phones, fiddle with their rigs, sleep and otherwise try to make the daylong waits pass as painlessly as possible.

As a part of the effort to crack down on gas thefts in Mexico, the two main gas pipelines that run from the port to distribution hubs in Hermosillo and Ciudad Obregon have been closed. That means trucks have to come all the way to Guaymas, and then on to stations around the vast state.

Rodrigo Cervantes/KJZZ
Pedestrians walk in front of a gas station in Mexico City closed as a result of the fuel shortage in January 2019.

“I left early, at dawn practically. I went in to fill up at 11 p.m. last night, all day just stopped,” said Adan Ledezma, an Hermosillo-based truck driver. “I left here around midnight to back to Hermosillo, to the gas station. I arrived around 3:30, and came right back.”

He said he’s only a little tired, but that could change if the situation continues. He hopes that the pipelines open up again soon, to get a break from the exhausting back-and-forth.

Luis Horacio Muñoz Santini, head of a group representing Sonoran gas stations, concedes that trucks are not the most efficient means of getting gas to pumps around the state. Nevertheless, as of Monday, only two stations had reported running out of gas, and were quickly replenished. The state oil company Pemex said it had enough supply for Sonoran demand.

“The most economical way to move gas is by pipeline,” he said. However, he said the tough measures were worth it given the seriousness of gas theft.

Through October of last year, there were over 12,000 reports of gas being siphoned off illegally —167 of those were in Sonora, according to Pemex. A release from Pemex the state-owned oil company said those losses cost the country well over $3 billion last year.

As to how long the pipeline closures will be in place, Muñoz didn’t have a clear idea. Neither did Pemex spokesperson Erick Treviño.

“However long it takes,” he said. “For the stealing to stop and for the gas to be used for the benefit of Mexican society.”