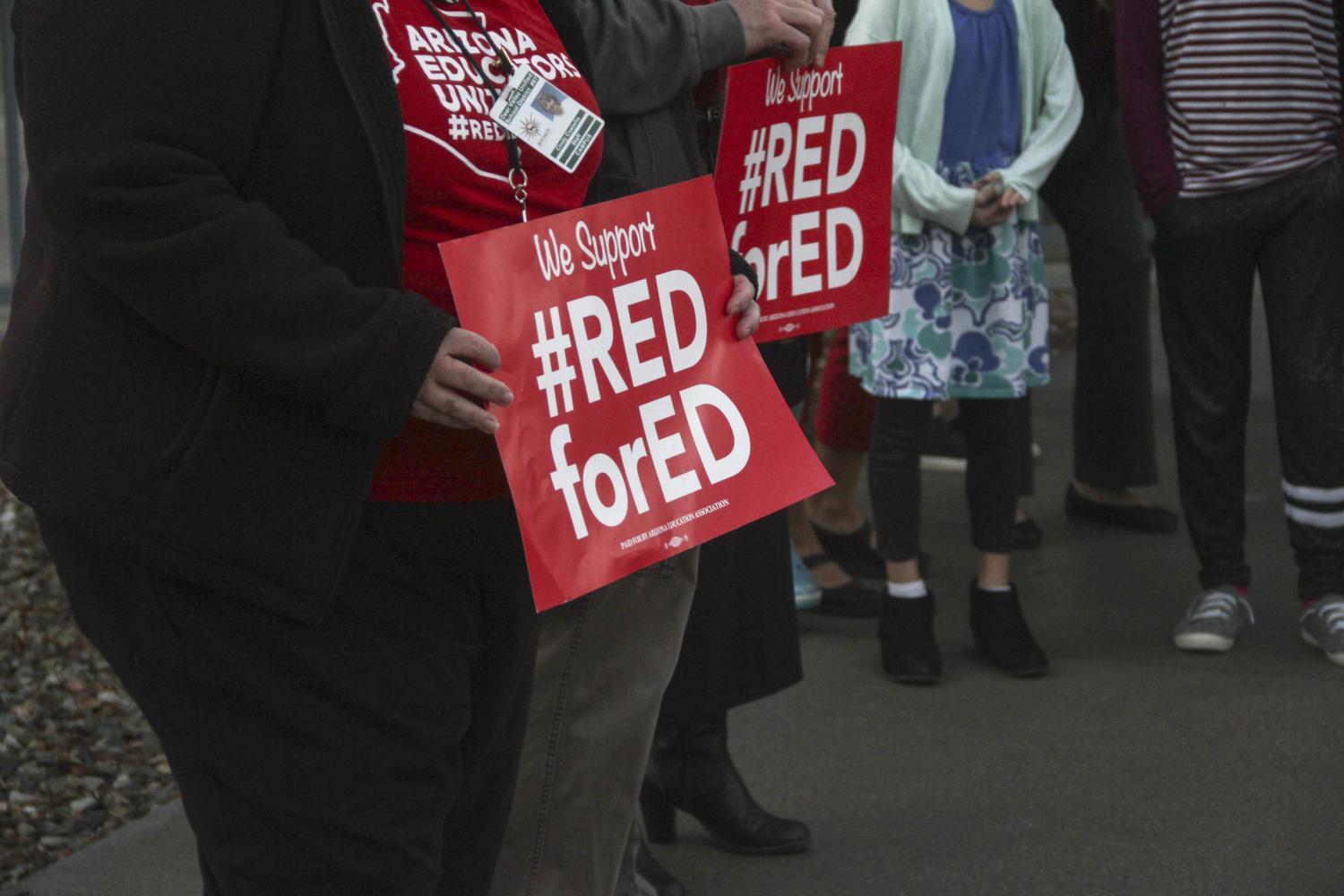 Mariana Dale/KJZZ
Teachers, parents and community members continue to advocate for funding for public education in 2019.

Educators around the state wore red Wednesday to show their support for public education today. As lawmakers consider new policies and the state’s budget, educators want to make sure they aren’t left out of the conversation.

Many of Kelley Fisher’s kindergarten students greeted her by wrapping their arms around her waist in a hug.

“How are you this morning?” she asked, smiling at each one.

This morning Fisher's in front of Glendale’s Las Brisas Elementary not just to say hi to her students, but to talk to their parents about public education funding in Arizona.

She hands each one a red card with information on how to find and contact their local legislators.

“What we’re really encouraging is for parents to tell their story about what is missing,” Fisher said.

The average teacher in Fisher’s district got a $5,000 raise last year, but there are still problems money would fix. For example the district has 84 classified positions open. There aren’t enough paraprofessionals or bus drivers to go around.

“It’s all of us that make the child’s education experience what it is,” Fisher said. It’s not me in my classroom. It’s me and everyone else that works with me. ”

Parents at Las Brisas seemed to understand the teacher’s concerns.

“I do hope that we continue to make ground in terms of our students and what’s best for them and their education and their future,” said Lisa Stegman, who was dressed as a Sonic Cherry Limeade Wednesday morning to promote a Parent Teacher Student Association fundraising event.

Fikre Bizuneh drops off his two kids from the family’s silver minivan. He’s seen they’re class sizes increase, from 18-19 students and now closer to 30,  and understands the strain that can put on teachers. 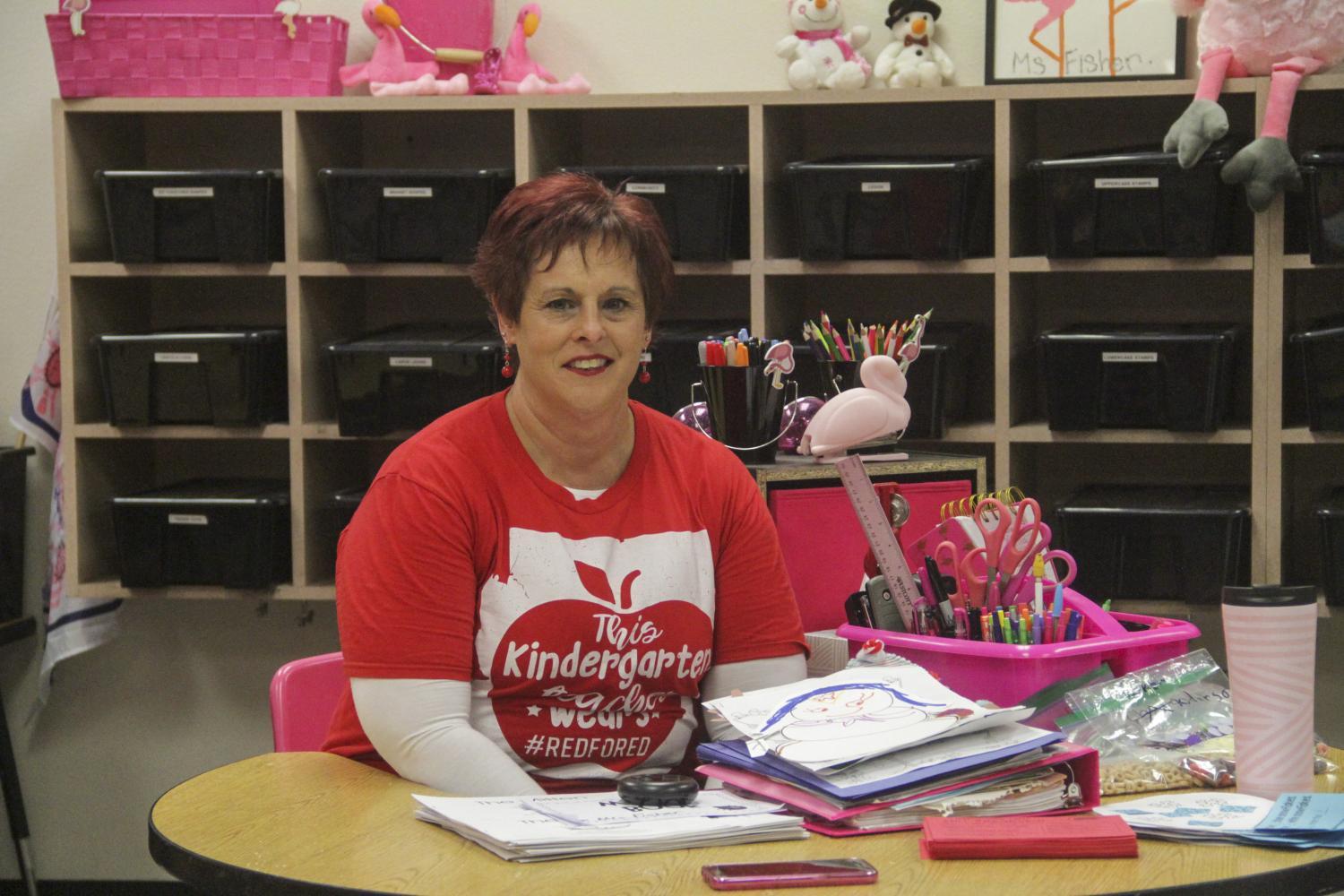 Mariana Dale/KJZZ
Kelley Fisher has been a kindergarten teacher for almost 20 years. She says when she started class sizes were smaller and schools had more money for supplies she now buys out of her own pocket.

“We should be coming out and helping them out wherever they can,” Bizuneh said.

Bizuneh, who immigrated from Ethiopia, credits his education for the life he has now.

“Life has been good to me so I would expect people can use those opportunities to improve their lives and education in my opinion is the key.”

'Stepping Out And Volunteering'

“Very pink, very flamingo-filled,” is how Kelley Fisher describes the classroom where she teaches 24 kindergartners every day.

She’s been in the Deer Valley Unified School District for 18 years. Fisher remembers when she started in the district supplies were ample and she received $300 to buy new books for her classroom.

The district and others in the state are still struggling to hire bus drivers and paraprofessionals.

Fisher joined Arizona Educators United last year and is now a leader in the organization.

“I used to just be the little kindergarten teacher that sat in her room and thought about all these things that were happening and thought, ‘Wow, this is really sad for the kids,’” Fisher said. “Stepping out and volunteering to be a part of the leadership has really shown me that there is solidarity across the state and it’s given me the confidence to stand up.”