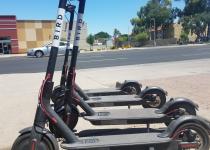 Sky Schaudt/KJZZ
Bird scooters parked at a bus stop in Tempe in June 2018.

There are new regulations for electric scooters and dockless bikes taking effect in Tempe next month.

The City Council unanimously approved a licensing agreement Thursday, Jan. 10 meant to address safety issues and concerns about where the scooters are placed.

The annual license will cost companies almost $7,888. They will also have to pay $1.06 a day per vehicle and be responsible for paying a $100 relocation fee if Tempe staff have to move scooters or bikes.

“If companies have to pay per scooters per day, then they’re not just going to flood our city with 20,00 scooters, because then they have to pay $20,000 a day,” Yee said.

“We want to see more people out of their cars and using this new technology.”

The agreement also requires the companies to share data with the city such as the where the scooters are ridden, how many are damaged a month and customer complaints.

Residents told city leaders in a public meeting the scooters block sidewalks and the riders zip by dangerously fast.

“I always believed that Tempe was a safety first city, but I think I’m wrong,” said Steve Bartel, who has worked with other community members to raise awareness about the issue.

The Arizona Republic reported there have been 119 scooter-related incidents in Tempe between June and the end of 2018.