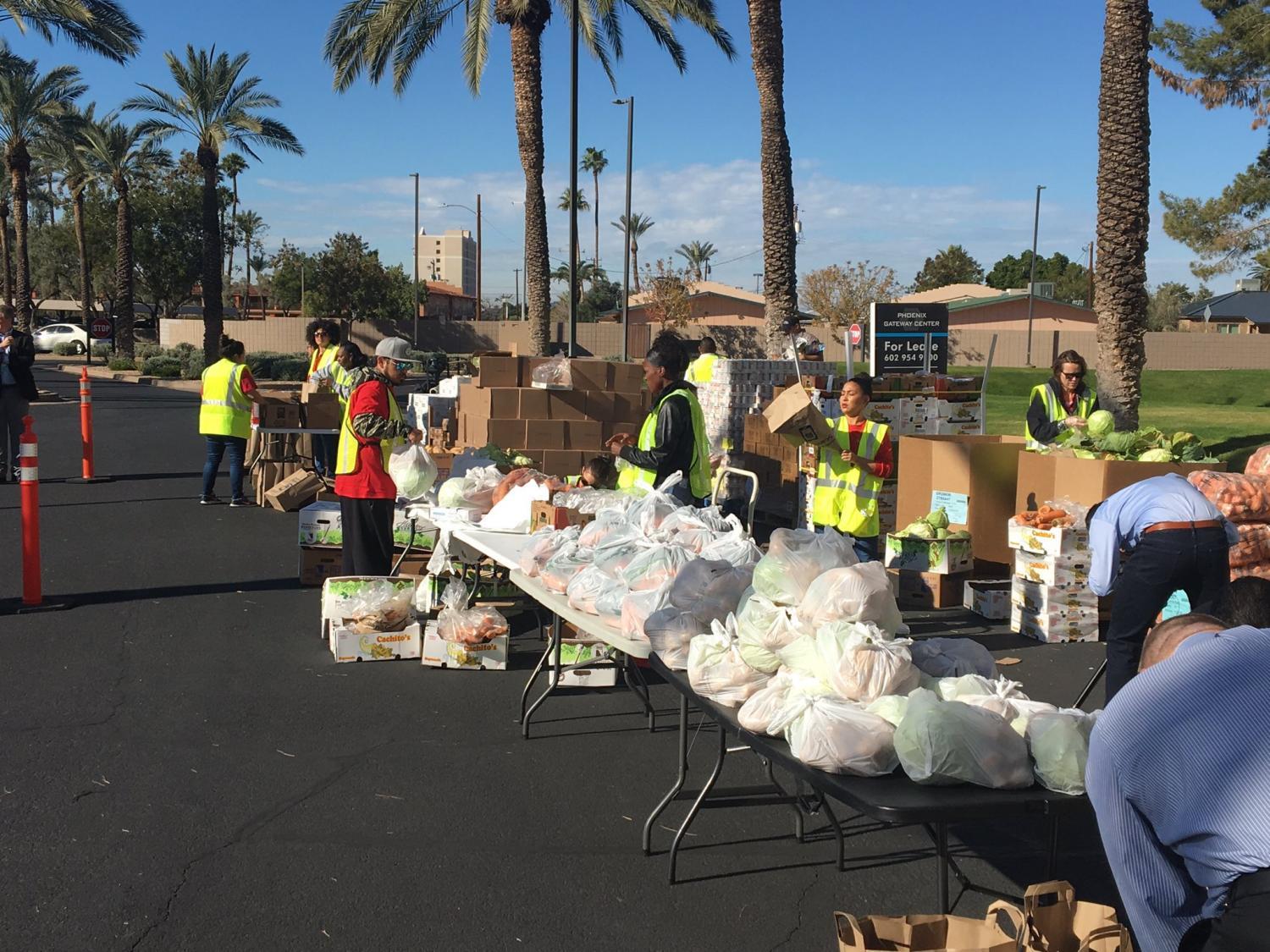 There are almost 1,000 TSA workers in the Phoenix areas alone that have now gone without a paycheck in the new year. St. Mary’s Food Bank said it served about 300 on Monday. The food bank will be back to serve more if the government shutdown continues to strain the budgets of its workers.

A St. Mary’s Food Bank employee offered two bags full of produce, cereal and bread to a line of people coming up for a one-day food bank set up near Phoenix Sky Harbor Airport.

A majority were federal workers, many coming before or after a shift.

It was TSA officer Gabriella Coleman’s day off. She came right when the food pantry started at 11 a.m.

“It’s just been stressful, kind of," Coleman said. "And then when you have kids on top of it, young kids, it’s just been a ball of anxiety, really.”

Coleman was joined by her friend and fellow TSA officer Debbie Cherry. They each have two children, all under 6 years old. 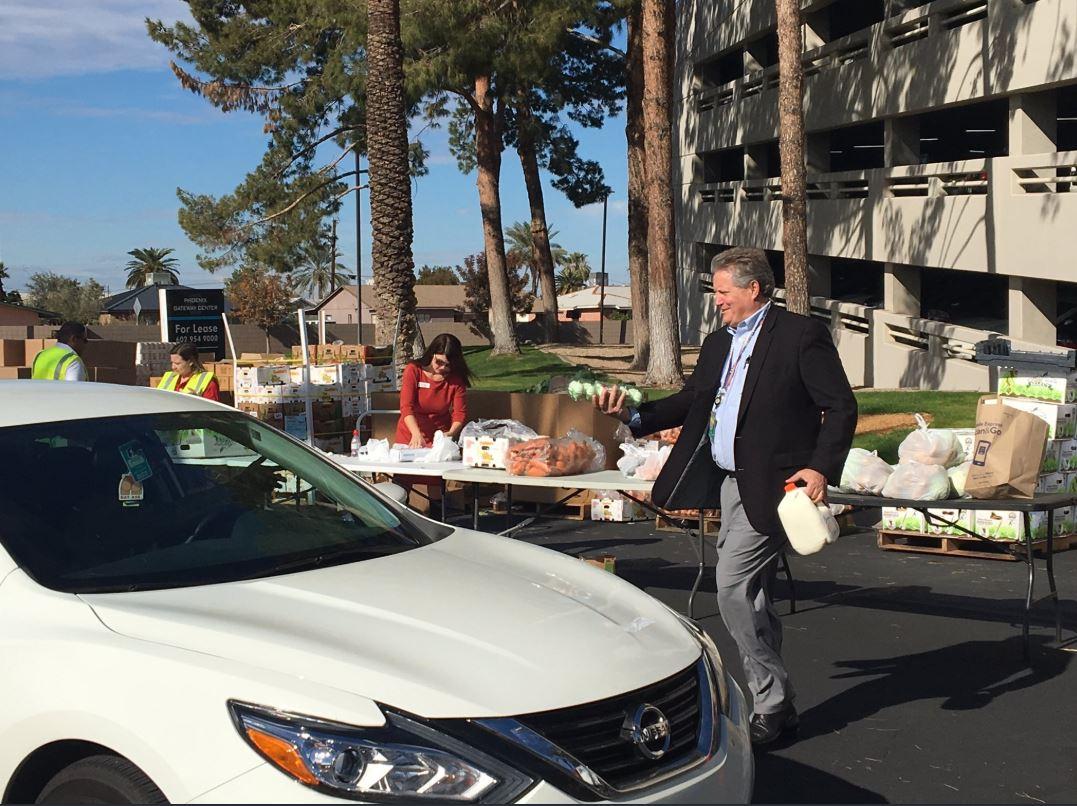 Casey Kuhn/KJZZ
A federal security director with the TSA hands out milk and eggs to his employees during the government shutdown in January.

And Cherry is pregnant with twins due in a month and a half.

“I’ve been dipping into my savings and taken care of all of my prenatal and maternity needs from my savings," Cherry said. "But we’re not able to replenish any of those [savings].”

Cherry and Coleman met on the job at Sky Harbor and became fast friends. Coleman waved to another TSA worker as he joins the line to pick up food.

TSA officers across the nation have called in sick to protest the shutdown, leading to longer wait times at the airport.

Coleman and Cherry wouldn’t do that, though they’ve seen colleagues who have.

For Coleman, it’s a matter of job security.

“Besides working under these conditions, it’s a really good job; it’s a federal job. You have good benefits, you have good pay,” Coleman said.

For Cherry, it’s a matter of duty.

“We took an oath to keep people safe and do our job and if we’re not going to be there to do it, who is?”

While both women do their jobs, their paychecks are furloughed.

“These folks have student loans to pay, they have house payments, car payments. Those kinds of payments won’t wait," said Brown.

The food is packaged goods stockpiled over the holidays. Brown said they need donations again, preferably as cash and not food because they can buy at a lower rate from the grocery store.

“People were nice and made a lot of donations during that time," Brown said. "But this food normally lasts us in the food bank until March or April. We’re using a lot of it now.”

Phoenix Sky Harbor is just one of many airports in Arizona. Brown said he has heard TSA employees have needs across the state in more remote places with airports, like Page and the Grand Canyon.

In Phoenix, the day heated up as the sun beat down on St. Mary’s workers shoving food into bags in an assembly line. More and more federal employees came as shifts ended around noon. 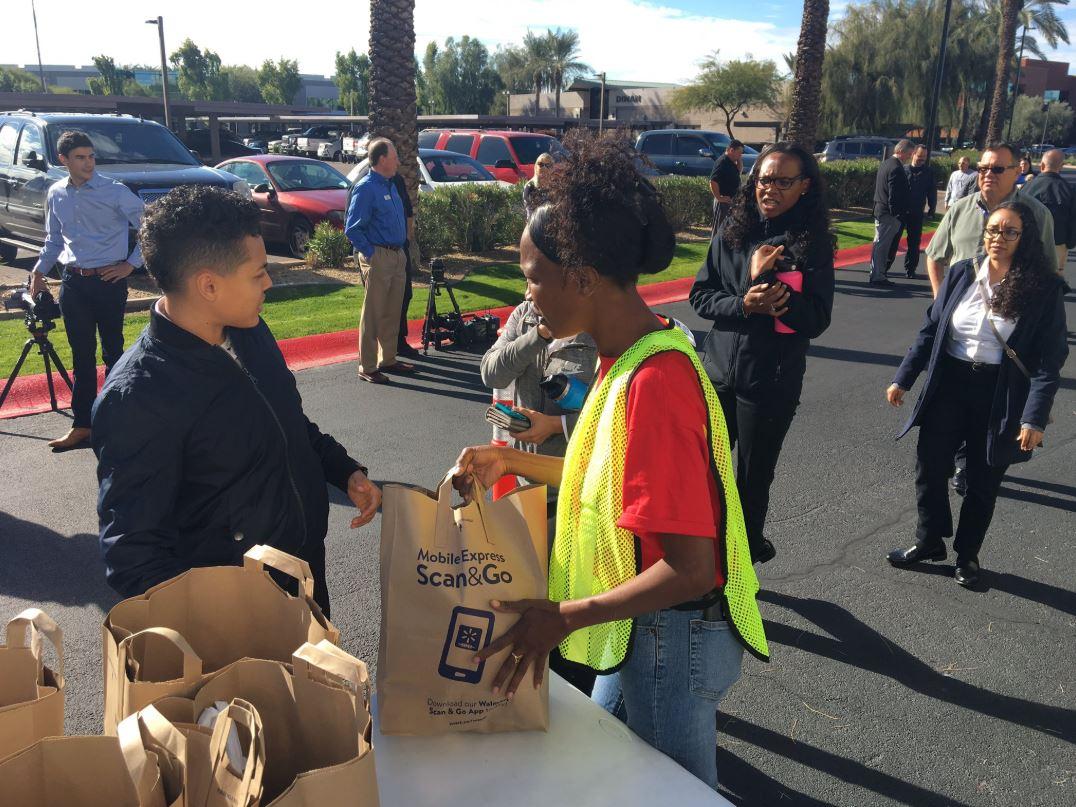 Casey Kuhn/KJZZ
People line up to receive food from St. Mary's Mobile Food Pantry during the government shutdown on Jan. 14, 2019.

Others waited just before the pantry began at 11 a.m., like engineer Greg Tieman. He works for the Federal Avation Administration, is 36 years old and has a family to support.

"With the government shutdown, I’m unemployed, so [it's] either start looking for another job or find places like this where I can get food for my family,” Tieman said.

Tieman has worked for the government for five years. His four children are 13 years old and younger.

High-level TSA managers acted as traffic directors when the food pantry turned into a makeshift drive-thru 20 cars deep. A federal security director raced around handing out eggs and milk to uniformed officers.

Two TSA officers in bright blue button-up shirts with a TSA seal on the sleeve, belted, black slacks and dress shoes came back after picking up food for a friend on medical leave.

“Just got off work, and I want to help for our colleagues that are able to come through this line by the good graces of St. Mary,” said Transportation Safety Officer Susie Shepherd.

Shepherd, her blond hair pulled back in a tight bun, packed carrots into bags with her friend. Both came right after coming off her eight-hour shift at Sky Harbor Airport. Her shift started at 3:45 a.m.

“It’s important because we’re like a family. You have to help your family. It’s not just affecting one, it’s affecting everybody.”