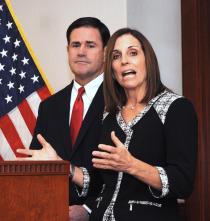 A lawsuit filed before the new year looks to demand a special Arizona election to replace the late Sen. John McCain.

Lawyers for Gov. Doug Ducey are challenging the suit, saying Ducey abided by the state constitution when he appointed Martha McSally to succeed Sen. Jon Kyl.

In legal papers filed Friday, Ducey’s legal team acknowledged that by law U.S. House vacancies must be filled by a special election, but vacant Senate seats can be appointed by the governor until the next regular election.

The suit argues that a special election should be called within six months and that there should be no reason for an unelected official to serve for a long period of time. Ducey’s legal team countered that assertion, saying McCain’s passing, days before the primary election, justifies keeping an appointee in the Senate until 2020 when the final two years of McCain's term will again be up for grabs.