Arizona Attorney General Mark Brnovich is suing the state’s public universities over what he claims are illegal real estate deals.

Land owned by the colleges is exempt from property taxes. The lawsuit specifically targets Arizona State University, which has struck several lucrative land deals, including one with the Omni Hotel.

“Very simply, we want to either stop this transaction from moving forward or alternatively we want to make sure that the proper property taxes are paid,” Brnovich said.

The lawsuit argues that should educational institutions want or need to come up with new ways to bring in money, that should be approved and outlined by the Arizona Legislature.

“ASU is a public university, not a commercial enterprise or an urban development authority,” the lawsuit states.

ASU, in a written statement, said: “This frivolous lawsuit is a huge waste of taxpayer money, time and energy, and it saps the public’s faith in our elected officials.” 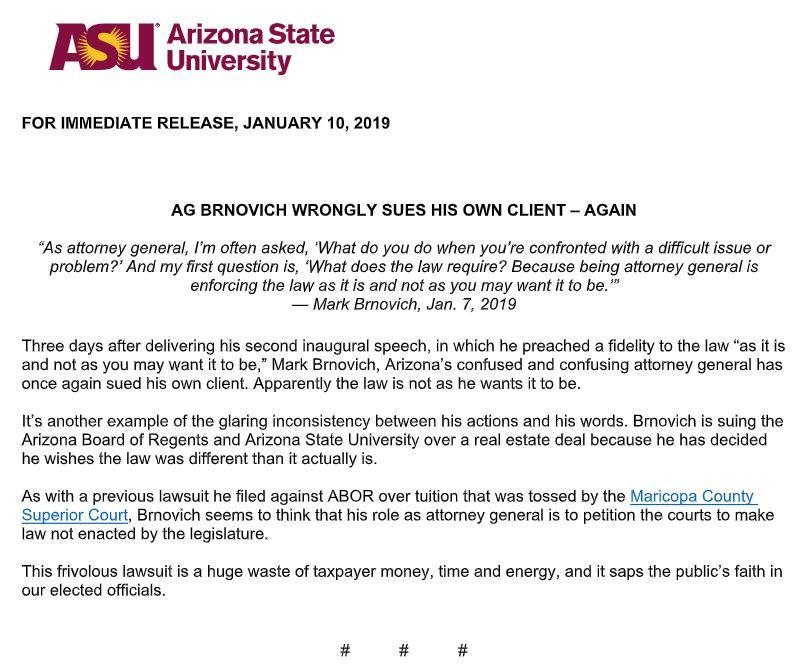 This issue relates to recent controversy over governments offering “lease excise taxes,” known as GPLETS, to private entities that build on public land.

A GPLET is separate from property taxes and often less costly, a benefit to the private developers.

The Arizona Republic has reported extensively on how these projects push “additional costs onto neighboring property owners.”

Arizona’s public universities do not engage in the GPLET process.

“Some of the largest existing and planned construction projects in Tempe will be built by private developers, leased back to private tenants, and yet produce no property revenue,” the lawsuit said.

The lawsuit names several previous projects, including Marina Heights, a senior living complex at ASU, and the planned Omni hotel and convention center.

As it stands now, the project will pay no property taxes and received a $21 million tax break from the City of Tempe.

The Arizona Board of Regents in December adopted new policies to govern its real estate transactions.

The lawsuit was filed in Arizona Tax Court, and the university and ABOR have 20 days to respond.