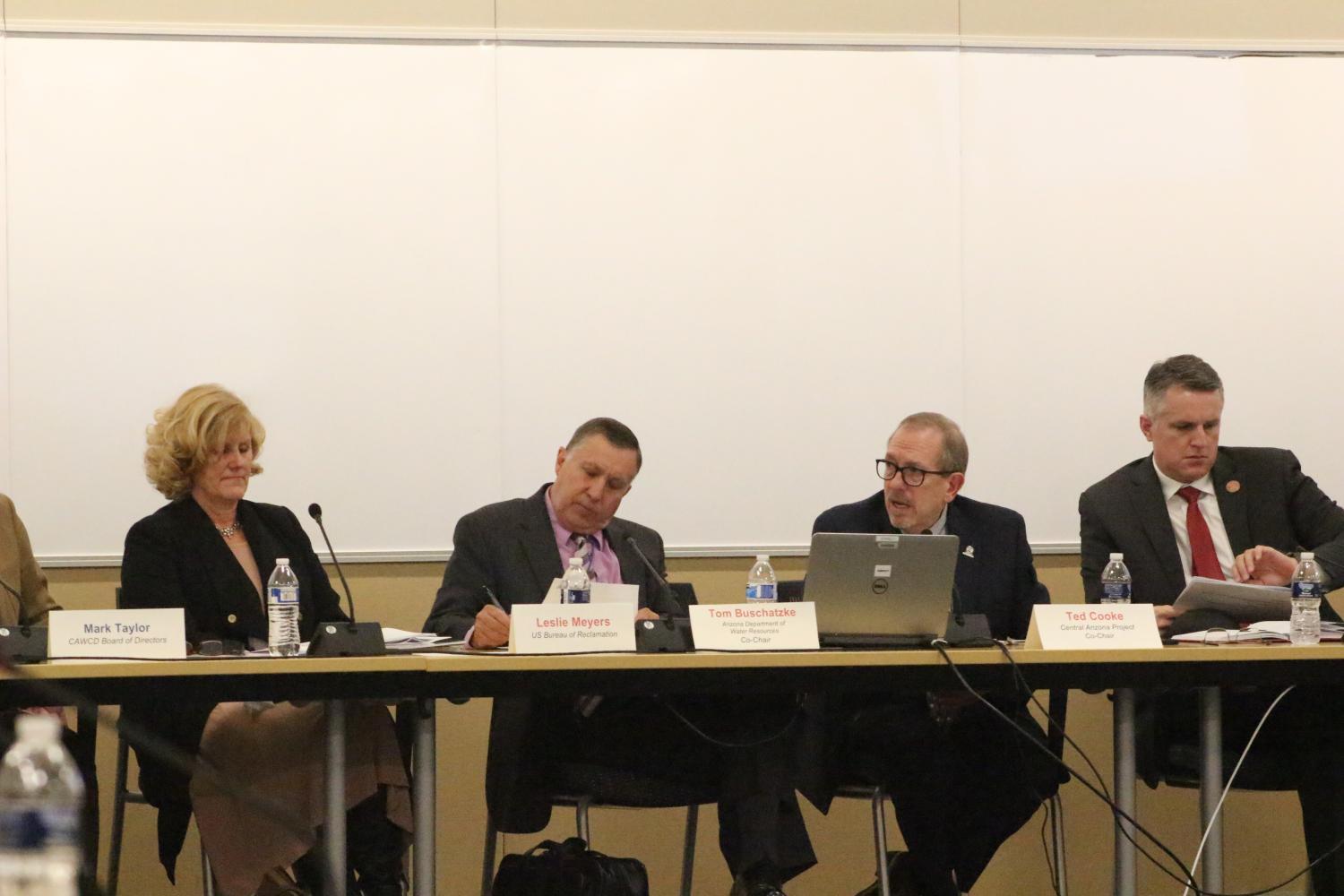 The partial federal government shutdown is having its effect on Arizona’s painstaking work on an internal drought plan, although not enough to change a federal deadline set for the end of this month.

The Bureau of Reclamation (BOR) remains open, according to Phoenix-area manager Leslie Meyers. She said its funding was appropriated in September. The legal counsel for her office, however, is part of the Department of Interior (DOI), specifically the office of the Field Solicitor. They are furloughed.

“Right now, not having them at work is very difficult for us,” Meyers told reporters Tuesday. “It’s hard to move forward.”

The DOI lawyers have been working with Arizona’s two biggest water agencies, the Central Arizona Project and the Arizona Department of Water Resources, to hammer out the various agreements required to finalize the state’s drought plan.

Key water stakeholders in the state, known as the Steering Committee for the Arizona Lower Basin Drought Contingency Plan (DCP), met on Tuesday for the first time since BOR Commissioner Brenda Burman set a Jan. 31 deadline for parties to have passed the DCP. The broad DCP covers the entire Colorado River basin and is an effort to prop up Lakes Mead and Powell, the major reservoirs for the river system. Arizona and a few California water agencies are the last holdouts amid internal negotiations.

If the shutdown does not end soon, Meyers guessed Burman would try to get some of the attorneys declared “essential” in order to get them back to work (albeit with no pay).

The deadline, however, is still firm.

“The deadline really was a work-back from dates that are hard-wired into agreements and other things,” Meyers said. For example, the DCP’s “shortage” designations, which would mandate any cuts to Lake Mead deliveries in 2020, will be set according to an August hydrology report.

The deadline also provides time for the Bureau of Reclamation to decide on a separate course of action if Arizona and the California entities do not approve the DCP.

But the ongoing shutdown is not the only unresolved issue.

At Tuesday’s meeting, the temperature in the room seemed to jump a few degrees during a discussion of so-called “mitigation” water for home builders. Mitigation has largely focused on providing farmers in Pinal County with water to ease them off Colorado River water and onto groundwater. Higher-priority water users are also getting mitigated, since they also face cuts under the DCP.

Home builders are likely to get access to water through a separate but related deal between the Gila River Indian Community (GRIC) and the CAP’s groundwater replenishment arm, known as the CAGRD. The tribal council has approved it, pending state approval of the drought plan.

That is not enough certainty for Spencer Kamps with the Home Builders Association of Central Arizona. His group, along with the Southern Arizona Home Builders Association, wants the Arizona DCP to include 7,000 acre-feet of mitigation water for development for the first three years of a shortage declaration (21,000 acre-feet total). If the DCP passes, and the GRIC-CAGRD deal is executed, the provision would be removed.

Kamps’ concern is that Arizona’s internal DCP, whatever its current form, may get changed during the legislative process, making it unsatisfactory for the GRIC.

“What condition is DCP in when it goes through?” Kamps said. “Ultimately, nobody knows what that’s gonna be. We hope it’s the deal that ultimately passes here. But if that’s modified in any way, then that creates uncertainty. We’re just trying to address it.”

GRIC Governor Stephen Roe Lewis said that the GRIC-CAGRD deal was ready to go if and when Gov. Ducey signs the package securing the state’s drought plan.

“The council will not revisit the issue unless Governor Ducey does not sign the DCP legislation,” Lewis said. He also promised to ask his Tribal Council for permission to send a letter clarifying that fact.

A group representing big developers, however, disagreed with the home builders’ request.

“At this point, I don’t know where we’re going to come up with 21,000 acre-feet of water,” said Cheryl Lombard, CEO of Valley Partnership. “I just don’t see the need for it. In fact, we’re one of the only entities, if not the only entity, getting new water out of this entire discussion.”