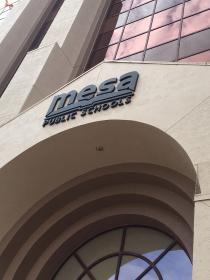 Mariana Dale/KJZZ
Mesa Public Schools is the largest district in the state.

The Mesa Public Schools Governing Board recently approved the district spending up to $14 million to hire educators through so-called employee leasing companies.

“We have an aging population of teachers and a lot of them coming to their retirement years. Same thing in support personnel,” said Mesa Public Schools assistant superintendent of human resources Shaun Holmes.

A 2015 report from the Arizona Department of Education found 24 percent of the state’s teachers were eligible to retire between 2013 and 2018.

“It’s a way for employees who have retired and maybe want a little bit more flexibility to continue working in public schools,” Holmes said. “It’s also a way for districts to save a little bit of money.”

The Arizona Republic reported extensively on employee leasing in 2010. Among the concerns are increased pressure on the state retirement system.