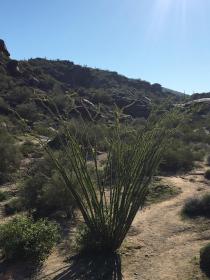 Casey Kuhn/KJZZ
An ocotillo shrub growing on the top of South Mountain.

Ocotillos are one of many unique plants with unusual qualities native to the Sonoran desert. KJZZ listener Brooke Moorhead asked via our Q&AZ reporting project what exactly makes the shrub grow leaves.

Let’s get one thing straight: an ocotillo is not a cactus. It is a shrub with twisting, whip-like stems with red flowers at the top that can grow up to 20 feet tall.

“It looks kind of like an explosion of fireworks from the ground.”

University of Arizona Arboretum director Tanya Quist said the ocotillo is well-adapted to desert life. The shrub only grows leaves when it’s wet, to capture the most energy. Then, after a few weeks, they fall off.

“And when the leaves fall off, the stalk of the leaf, which is called the petiole, will harden into a blunt spine that’s about an inch long,” Quist said.

So most of the year, Quist said, it looks kind of dead. But, under the bark and thorns are dormant buds which will grow leaves when it rains again.

Quist said the shrub grows leaves 4-5 times a year. While often used as an ornamental plant today, Native Americans have used the ocotillo for its practical purposes.

“Some native peoples ate the fruit and the flowers and they also used the flowers to make cough medicine," Quist said. "There’s some medicinal properties in the roots as well, in that the roots can be dried and ground and appear to have some benefit in treating wounds and reducing inflammation.”

The ocotillo resin can also be used as a leather conditioner.