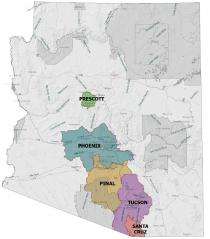 Arizona Department of Water Resources
A map of the five active management areas in central Arizona where groundwater pumping is regulated.

Groundwater regulators are in the middle of what’s called a “basin sweep” of the Pinal Active Management Area (AMA). The data will contribute to modeling of the groundwater levels in that part of the state.

It’s just one data point in monitoring the aquifer, according the the Arizona Department of Water Resources.

“We can’t just cut away and look under the ground and see where the water table is,” said Jeff Inwood, chief hydrologist at the Arizona Department of Water Resources. “We have points that we can get data about and we can try to infer spatially based on those data points.”

The state takes levels annually in 1,600 to 1,800 wells statewide, but but each year the state does an intense sweep of just one area. This year, it’s the Pinal AMA.

In Arizona there are five AMAs that cover the middle of the state where groundwater is regulated.

Inwood said on its own, the water level data from the sweep does not give the state an idea of how full the aquifer is. A well’s level, for example, depends on how it is screened and also on the rock and sand mixture that exists around it.

But it is an important data point.

“We try to do these basin sweeps on a five-year rotating basis so that we can then compare the sweep data for Pinal from five years ago or five years into the future,” he said.

Groundwater in the Pinal County area will soon become even more important to the local economy. Farmers there will have to transition to groundwater for irrigation over the next few years, as Colorado River supplies are expected to scale back.