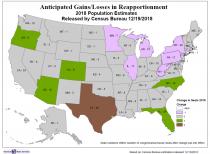 A new analysis by Election Data Services concludes that the shifts in population from the Northeast to the South and West pretty much guarantee that Arizona is going to pick up a 10th seat in the U.S. House of Representatives after the decennial census.

The organization's Kimball Brace said that's because Arizona is adding residents at a rate faster than much of the rest of the country.

But Arizona's gain is going to be someone else's loss. And in this case, Brace said the latest estimates mean that seat will come from Rhode Island.

The reason is that redistricting is a zero-sum game.

Federal law limits the House to 435 members. And if Arizona gets an additional seat, it has to come from somewhere else.
It's sort of like musical chairs.

Brace said that, based on the latest population trends, Rhode Island will be reduced to having just one representative in the House.

It's not just Arizona, which already has added about 780,000 new residents since the 2010 census when the last lines were drawn.

Brace figures that Texas, which already has 36 representatives, will pick up another two based on adding more than 3.5 million residents already since the 2010 census.

Other rapidly growing states that will get an additional House seat include Oregon, Colorado, Florida and North Carolina.
The losers? Aside from Rhode Island, Brace predicts shrinking congressional delegations for New York, Pennsylvania, West Virginia, Michigan, Illinois and Minnesota.

It isn't a strict math formula, dividing up the U.S. population by 435 to determine how many new residents it takes to get an additional congressional seat. Since each state is entitled to one, that means Wyoming gets the same single representative at 577,000 residents as Rhode Island with more than a million inhabitants.

And Brace said the projections — and they are just that — could depend on some variables.

One of the more interesting scenarios would involve California actually losing one of its 53 representatives because of possible faster growth in Minnesota than the current numbers suggest. If that happens, Brace said, it wold be the first time in California's nearly 160-year history that it actually lost a seat.

And he said it's possible that New York actually could lose two seats, depending on the projection modeling.

While that might help Texas or Montana, Brace does not see the numbers giving Arizona more than one new seat.

All that then creates an interesting scenario of how to redivide the state in 10 pieces rather than nine. Officially speaking, politics will not play a role here. That's because voters in 2000 stripped the responsibility of drawing lines away from legislators and gave it to the Independent Redistricting Commission. It is composed of two Republicans, two Democrats and chaired by an independent chosen by the other four.

But politics does matter.

The initiative that created the commission requires that it consider a variety of factors, including respecting communities of interest, using county boundaries when possible and have districts of roughly equal population.

More the the point, what that law also mandates is that commissioners create as many politically competitive districts as possible. The 2018 election resulted in the election of five Democrats and four Republicans, a pickup of one seat by Democrats.

Political consultant Chuck Coughlin points out that the most rapid growth in Arizona is occurring in Maricopa County. He said that makes it likely that any new district created likely would be carved, at least in part, out of districts already in the county.

Seven of the nine existing districts touch on populated areas of Maricopa County, with five of these wholly within the county.

Coughlin said one likely move would be to redraw the lines in the East Valley area of the county.

He said Congressional District 9, the district that until recently was represented by Kyrsten Sinema, could be carved up a bit to give Democrats a bit less of an edge and make it more politically competitive.

Each change has a ripple effect through the rest of the state. And with the population growth in the Phoenix area, that could mean the rural districts will become even larger geographically to cobble together find the approximately 740,000 people necessary.