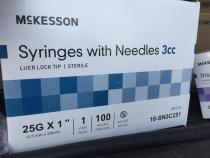 A letter delivered to the governor’s office this week says it’s a deeply needed response to the state’s drug overdose crisis.

“Too many lives are on the line to continue with the status quo,” the letter states.

It’s signed by more than 30 organizations involved in public health and addiction recovery.

“Arizona has fallen behind in its response to this national crisis, states like North Carolina, Indiana, and Kentucky have all implemented syringe service legislation and are seeing the benefits in their communities,” the letter says.

Needle exchanges — also known as syringe service programs — remain illegal under Arizona’s drug laws. That has led some programs to operate under the radar and without public funding.

It did not, however, include any provision to legalize syringe exchanges, despite calls from advocates to do so.

“There is a misconception that it is only about the exchange of used and clean syringes,” said Sarah Fynmore, who is the policy coordinator for Sonoran Prevention Works — a nonprofit that does outreach to drug users and signed the letter, too.

“But really syringe service programs are resource points for behavioral health support, for HIV and Hepatitis C testing and for accessing naloxone.”

Syringe service programs reduce the spread of infectious diseases, don’t promote drug use and increase the chance an IV drug user will actually seek out treatment, according to the U.S. Centers for Disease Control and Prevention.

Even with early support, efforts to legalize syringe exchanges failed in the 2018 legislative session.

In February, the Arizona House of Representatives unanimously passed a bill that would have allowed IV drug users to exchange dirty needles for clean ones without fear of arrest.

The bill underwent major changes in the Arizona Senate, some of which supporters warned could actually backfire and make the problem worse.

The legislation eventually died in committee and supporters of the bill said the governor opposed the idea, although Ducey never took an official position. The governor's office did not return requests for comment about the letter and whether he supports legalizing syringe exchanges in the coming session.

State Rep. Tony Rivero, a Republican from the West Valley, sponsored the bill and plans to introduce a similar one next year.

“It’s going to be one of my top legislative priorities,” Rivero said. “We attack two problems at once: engaging people, trying to get them off drugs and also getting dirty needles off the streets.”

Rivero said he is optimistic they can get the bill through the legislature this time.

“We are going to work even harder, engage the Senate, the leadership and the governor’s office also,” Rivero said.