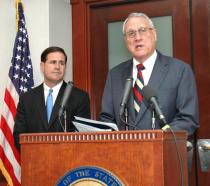 Kyl will leave the U.S. Senate on Dec. 31. His resignation was hand-delivered to the governor’s office Thursday afternoon.

In it, Kyl thanked the governor for appointing him to replace Sen. John McCain who died in August from a brain tumor. Kyle wrote that he thought it best to resign so that Ducey’s new appointee could begin the term with all of the U.S. Senators in January, and serve a full two, “potentially four,” years.

Kyl moved from the House to the U.S. Senate after winning the 1994 election, and he retired at the end of 2012.

He had been working as an attorney and lobbyist and was preparing to retire completely this year before Ducey asked him to fill McCain's seat.