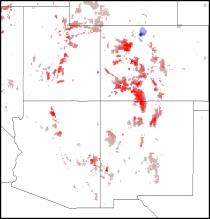 Colorado River basin dwellers have more of a reason to care about snowpack than their counterparts in other areas, according to a new study out of the University of Arizona.

The study quantified the change in snowpack from 1982 to 2016, estimating the change for small squares of land across the entire continental U.S. It produced much more specific geographical results than ever before, according to researchers.

The study says 13 percent of snowy patches in the West, or "snowy pixels" measuring four kilometers on each side, saw a decline in snow mass of 41 percent from 1982 to 2016.

Xubin Zeng, a professor in Hydrology and Atmospheric Science at UA, said snowy pixels with diminished snowpack came more often in some areas than in others, particularly at higher elevations.

“The decrease of the snow mass is significant over the Colorado River basin,” he said. “In contrast, over [the Sierra Nevada mountains], the decrease is not significant.”

Zeng authored the study with Patrick Broxton from UA’s School of Natural Resources and the Environment, and Nicholas Dawson of the Idaho Power Company. Their data set incorporated readings from government sites that measure snow mass and depth, as well as temperature and precipitation data. The UA study also integrated snow depth measurements gathered by over 10,000 volunteers.

The researchers also found a significantly shortened snow season for a sizable amount of land across the continental U.S. Nine percent of "snowy pixels" in the U.S. saw their snow years shortened by 34 days over the length of the study.

Zeng said snowmelt is not just a metaphorical water tower sending water downstream to nourish people. It can also trigger tree growth. “It’s a seasonal switch for ecosystem activities. So whenever snow is gone, [the] ecosystem will begin to have photosynthesis and become alive.”

But early snowmelt can lead to competition between two ecological forces.

EDITOR'S NOTE: This story has been changed to correct the area of "snowy pixels."